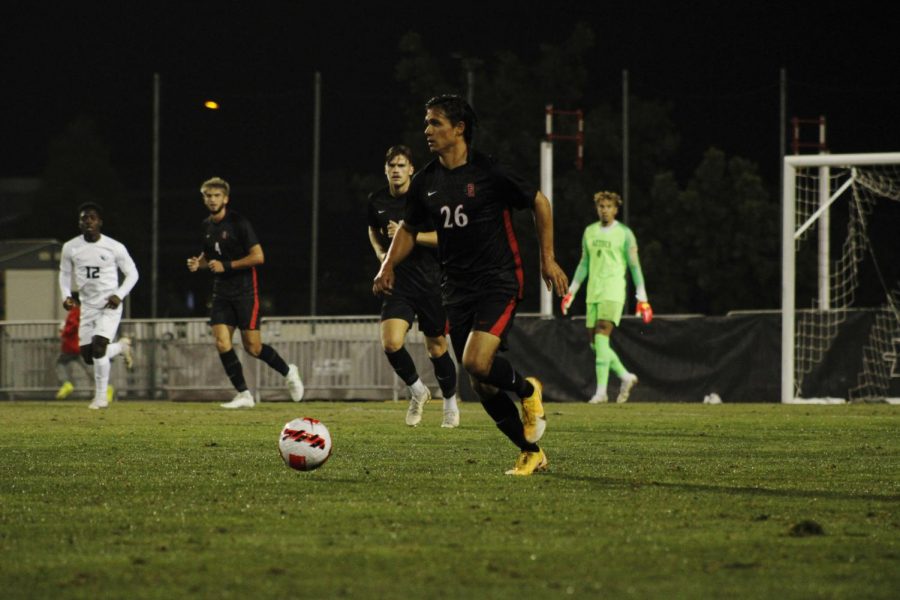 Junior Blake Bowen looks to make a play against Oregon State on Thursday.

The San Diego State men’s soccer team experienced their first home loss of the season after falling 1-0 against No. 2 Oregon State on a misty and foggy Thursday evening at the SDSU Sports Deck.

Oregon State’s lone goal came right after halftime. A 30-yard strike by sophomore midfielder Javier Armas in the 51st minute gave the Beavers the lead, and the Aztecs failed to rebut.

“It’s a tough result. I thought we played well enough and executed the tactics we wanted to, and they scored on a wonder strike, and that’s how it goes sometimes when you’re playing the number two team in the country,” head coach Ryan Hopkins said, after the match. “They can beat you a 100 different ways and I think we shut down about 99 of those ways, but they found a way to get the one and that’s football sometimes.

Although the Aztecs saw their first defeat on home soil – they were able to stay in the game with outstanding saves by sophomore goalkeeper Jacob Castro.

“It (the goal) was a bit unfortunate, [it] took a pretty wicked bounce before I was able to put my hands on it,” Castro said.” All the most I should make those saves to be honest but it was just a little unlucky to be honest.”

Castro would make seven saves against the Beavers 14 shots on goal. The Aztecs could have had an opportunity to equalize the game in minute 86 when sophomore midfielder Andre Ochoa had a chance to chip the Beaver’s keeper who was almost outside of the 18-yard box but Ochoa hesitated to make the shot and lost momentum of the play.

Castro said he is shifting his focus to Sunday’s match as the Aztecs await to host his former team the University of Washington.

“I feel like we are coming in more confident. This pitch is a lot different than Washingtons. It’s hard to play here,” Castro said. “Teams hate playing here. We have a lot of energy coming into this Sunday’s game and I feel like we can plot a dub.”

The last time the Aztecs beat the Washington Huskies was last season with a score of 2-0 at the SDSU Sports Deck.

“We know how to do it, we know that games have been tight in Washington going to overtime three times,” Hopkins said, “Obviously, we beat them here last year. We know what the stakes are and we still have our goals and dreams ahead of us.”