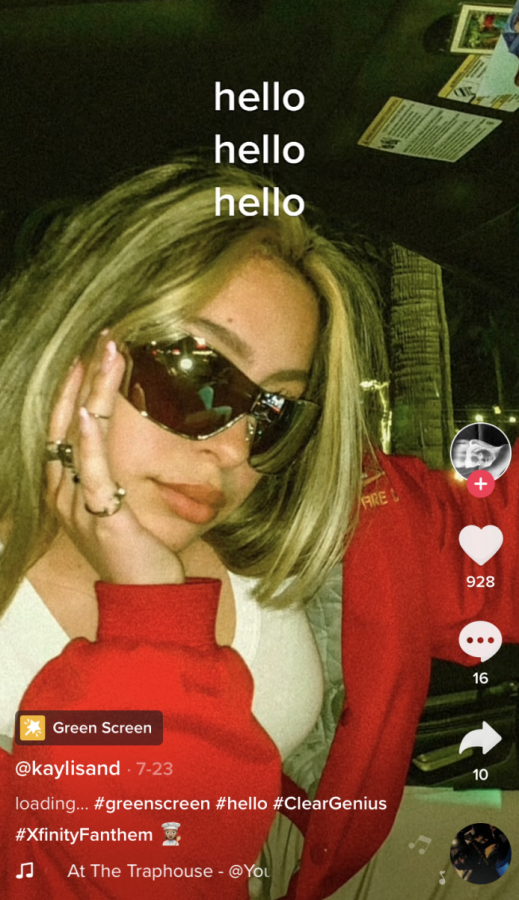 The popularity of Sandoval's TikTok soared during 2020, helping her land exclusive job opportunities.

Kayli Sandoval is a San Diego State student in her third year, studying journalism with an emphasis in media studies and minoring in film. Sandoval enjoys working with mixed media, and has gotten a lot of attention for the style she showcases on video edits, which has brought her many work opportunities with big names.

Sandoval also has 172 thousand followers on TikTok. Sandoval said she downloaded Tik Tok in 2018 because her younger sisters were obsessing over it and as the older, more protective sister, she wanted to look out for them.

When quarantine hit, she started posting more seriously and started uploading content she says she was extremely proud of. Her first viral video got 4.3 million likes and depicted the year 2020 through the lens of Sandoval’s signature edits. It was the first video she created with Premiere Pro, which she found out she had access to as an SDSU student.

Since then, Sandoval has gotten to work with big names like Vinnie Hacker, a popular TikTok creator and YouTuber. Some members of Hacker’s video team reached out to Sandoval and asked if she could do some edits for them.

“It was definitely a milestone into the style that I have today,” Sandoval said.

Sandoval’s editing style is fast-paced and put together using apps like Adobe Premiere Pro. She likes using camcorders and film photos to give a ‘90s and early 2000s aesthetic. She can’t start an edit without picking out the music, and likes listening to different genres in her personal life. Sandoval said reggae is a must for some mornings.

Being a fan of mixed media, she also likes incorporating collages and using photoshop for a bunch of frames, along with doodles.

“That’s definitely a signature thing that’s like, that’s a Kayli video if it has the doodles in it,” Sandoval said, “If you were to play one of my videos frame by frame, you can really see my attention to detail which I find to be another one of my signature aspects to my edit. There’s almost something new in every frame if not every three frames.”

Sandoval said she did an edit for a brand in Australia and drew specific items related to the brand onto it.

Sandoval has been involved with Kolorhouse here on campus. Kolorhouse was a brand founded in 2019, which then grew into a chapter. The group encourages community building through the use of creative outlets and mediums of expression.

Kolorhouse founder, Charlie Seith, reached out to Sandoval before classes started this semester but Sandoval took the time to find out what Kolorhouse was all about. She checked out their Instagram and really liked their message, so she joined right away.

Sandoval hadn’t made a video for about four months before that, as she was turning down commissions because she felt like she had to get back into the momentum of in-person classes.

Despite the demand for her work increasing, she says she likes to listen to her heart when choosing what work to do.

“I don’t say yes to every commission because if it’s some brand that just doesn’t really go with my own aesthetic, I don’t really see how we can work together so I definitely am a little bit choosy with who I pick to work with,” Sandoval said. “I definitely think it’s very important to keep my own style with every video that I do.”

Painting with her mom when she was young, and watching interesting documentaries with her dad has inspired her to create some of her own works in the future.

“I vividly remember one of my first edits was like this music video, to Iggy Azalea and Rita Ora’s ‘Black Widow’ and it was my little sister just walking down our driveway and I would just like to film them and put some effects on in Videostar,” Sandoval said. “That was a tragedy but it’s really, really funny to look back on now cause I’ve grown so much as an editor.”

Sandoval said that for every one second of video, she may edit for an hour or more.

“Without art, I would not be sane,” Sandoval said.

One can find that brand video, and others Sandoval has done, by going to her online portfolio or checking out her Instagram, @KayliSandoval.