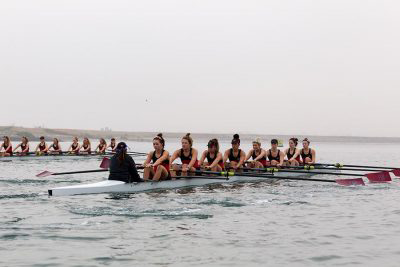 San Diego State's rowing team was discontinued at the end of the 2020-2021 school year. Nearly 500 alumni since 1998 had participated in the rowing program.

It has been one year since San Diego State announced that after the 2020-2021 season, the women’s rowing team would be cut as an official sport.

A team that, in their final season, saw 34 out of 44 rowers named to the American Athletic Conference all-academic team — the second-most in team history — is no more.

Initially, there were no plans to drop any sport. Athletics Director John David Wicker, speaking to the San Diego Union-Tribune, said there were no intentions of dropping any SDSU sports teams.

“Right now, we’re not looking to drop a sport,” Wicker said in a Union-Tribune article published April 15. “We’re comfortable where we’re at and where it is from an equity standpoint. We feel we’re, like, in a pretty good spot.”

Months later, citing the financial constraints brought upon by the COVID-19 pandemic and the need to fit within gender equity compliance under Title IX requirements, Wicker and the athletics department made the decision to cut women’s rowing.

An open letter addressed to the SDSU community from the athletics department supported their decision.

“Ultimately, a number of factors, including financial sustainability and gender equity prompted this decision. The need to realign the student-athlete population to more closely resemble the overall institution gender composition was a leading factor,” the letter stated. “The current financial impacts created by the COVID-19 pandemic prompted an evaluation of our sports portfolio with an eye towards the long-term success for our various sports and how to financially sustain that success.”

However, the dropping of women’s rowing, one of many Division 1 sports programs to be cut around the country, is not as black and white as it may seem.

The initial message from the athletics department to all teams followed the early thought process that SDSU was not contemplating cutting sports teams. This message was repeated throughout a series of meetings with staff, coaches and teams.

Then came November 2020 and, out of the blue according to some athletes and coaches, an early morning text was sent to a team captain regarding a mandatory team meeting with athletics on the same day involving all members of the team.

“It was like, a text at 9:30 in the morning,” one women’s rowing athlete said.  “Then, they get on and JD Wicker read from a prompt on a Zoom call… he just started reading from a prompt that you can very obviously see that he had written on an app on his second monitor, right from a prompt, and then completely dodged any single question that we had asked.”

This athlete asked to be anonymous to protect their athletic career.

Shortly after the meeting, the San Diego Union-Tribune released an article detailing the dismissal of the team. Initially, coaches were made unavailable to speak with the press, yet head coach Bill Zack voluntarily reached out to the Union-Tribune to add clarification.

“I took it upon myself to email Mark Zeigler and say that I’m available, here is my email address and here’s my phone number,” Zack said. “He did call me and he actually provided me way more background, he knew way more about the process and the decision and rationale than anything that was ever told to me.”

The announcement coincided closely with the fall National Letter of Intent Signings. The NLI’s were not sent out as scheduled, with administration ensuring coaches and recruits that they would be sent out at a later time.

After a while, Zack alongside parents of the recruits objected to the wait time and eventually pressured SDSU to eventually send out the NLI’s to recruits.

However, this wasn’t the end. Players were promised scholarships would remain intact through the next four years of schooling and, despite losing their status as athletes, they would still retain priority access to classes.

This too was a struggle to retain. Shortly after National Girls and Women in Sports Day, players found out via a late-night email that they had lost access to priority registration to classes.

Zack, unaware of the email, said he instead found out the morning after when the active team members, emotional after receiving the email the night before, showed it to him.

“I think that was the most upsetting towards the women,” Zack said. “They already felt, I was going to say undervalued, but not valued having their team cut.”

Viewing the removal as the school showing lesser support, Zack said he contacted former rowing sports liaison, Jenny Bramer, in an attempt to get the decision reversed. Eventually, the school relented and returned priority access and some full or slightly reduced scholarships to athletes.

“The issues of remaining on scholarship for those who were already enrolled at SDSU and on the team is murky,” Zack said in an email. “At one point, the AD (Athletics Director) stated that those on full scholarship would no longer receive the cost of attendance stipend portion of the scholarship. After objects by me, they backtracked on that.”

According to the athletes, poor communication was a key factor in the numerous questions the athletes had, leading some to wonder if the university cared about their plight at all.

“At my urging, the athletic director promised to generate an individual letter to each student-athlete letting them know what their ongoing scholarship would be, for how long it would be in effect,” Zack said. “To the best my knowledge. those letters were never produced.”

These thoughts of uncertainty lingered into the final season. The remaining athletes who didn’t opt-out of the season said they came into their final season looking to cap off their sport on a powerful swan song.

Emotions still ran high during and after the season. Even with a three-race schedule — down from a 10-race (13 counting scrimmages) schedule during the 2019-2020 season — the athletes still found it difficult to row knowing that the end was near.

“I think it was very good at the beginning, it was a very ‘let’s go out with a bang, let’s show them attitude,’” one player said. “Trying to keep that mindset, trying to maintain that intrinsic motivation and that drive that team has been stellar at in the past… it’s not ‘for nothing’ but there is no end result. It was very hard.”

The team said they did attempt to revive their team in a variety of ways, but each attempt was met with the same denial and response that the decision made was final.

The women’s rowing team at the University of Connecticut was also dropped during the same period of time. Unlike SDSU, UConn temporarily reinstated their team after athletes and coaches filed a lawsuit claiming the school would be violating Title IX, a federal law that guarantees equal access to women in education, including athletics.

The situation with Uconn differs from SDSU as an ESPN article detailing the reinstatement showed that UConn had been inflating participation numbers to skirt Title IX laws and the school had experienced participation gaps. UConn inflating numbers led to less scholarships being rewarded, according to the ESPN article.

Speaking to the Union-Tribune, Wicker cited SDSU’s rising undergraduate male enrollment — listed around 45 percent — as a reason SDSU needed to make the move.

According to Title IX, universities must meet at least one aspect of a “three-prong test” to meet Title IX requirements. The most common “prong” is to offer participation opportunities that are “substantially proportionate” to the full-time undergraduate population.

However, the Office of Civil Rights made a clarification of Title IX in 2003 which decried the cutting of sports teams, men’s or women’s, clarifying that “nothing in Title IX requires the cutting or reduction of teams in order to demonstrate compliance with Title IX, and that the elimination of teams is a disfavored practice.”

For now, all that is left for the former rowing team are memories of better days and of their past races.