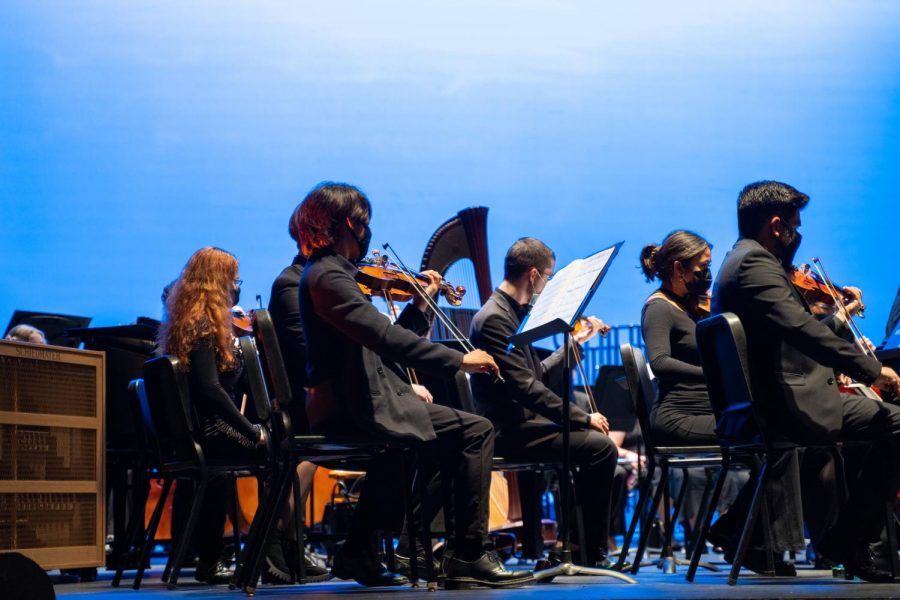 The SDSU Symphony Orchestra's performance of "Firebird Suite" was one of the night's highlights.

On Nov. 4, the San Diego State Wind Symphony and Symphony Orchestra performed their “Nothing Gold Can Stay” concert downtown in Balboa Theatre. The program consisted of two sections, each of which featured two pieces.

President Adela de la Torre and the Dean of Professional Studies and Fine Arts attended the event and shared their words and gratitude with the audience at the start of the event. In her brief time on stage, de la Torre stated SDSU will now start sponsoring an evening of gratitude each fall, an event for which the SDSU Wind Symphony and Symphony Orchestra will perform in Balboa Theatre.

This news was well received by music majors, whose pleas have been unattended by the president’s administration. Sade Rains, a third-year piano education major who attended as an audience member, shared her thoughts on this.

“I was surprised to see the president of our school giving a speech about how special the music students are… It was a relief to hear her mention how the music school would begin to receive some new sponsorships,” Rains said.

The performance touched their audience, especially in the context that it took place. “I have been deprived of the concert experience for so long, which is what made this performance even more special,” Rains said. “I feel that my words alone can’t bring the ‘Nothing Gold Can Stay’ concert justice.”

The venue was a notable element of this event, as Samuel Jiménez, a fourth-year violin education major who performed with the orchestra commented.

“It was such a privilege to… perform in such an amazing venue with some outstanding music. As students, we don’t always have the privilege to perform in these spaces, and it completely changes our sound into something that is truly astonishing to listen to,” Jiménez said.

The Wind Symphony opened the concert by performing “Nothing Gold Can Stay” by Steven Bryant. This piece, based on the poem of the same title by Robert Frost, captures a simple and familiar beauty.

Bryant discussed how the composition, which was inspired by Frost’s poem, captures a paradoxical descent from dawn to day, embodying the “lucky fall,” the idea that “loss can bring greater good, and is in fact necessary,” Bryant said.

The second work in the program featured Elizabeth Gaitan, a fourth-year vocal performance soprano. “Places we can no longer go” tells the story about the composer’s mother, who has dementia. It goes from unintelligible blabber to distinct, clear fragments of memories.

For this piece, the soprano starts singing in the audience, further capturing the disorientation dementia patients navigate daily by placing the soloist among the audience members, where many were not able to pinpoint where the voice they were listening to was coming from.

Jiménez, who is also Gaitan’s boyfriend, said this performance was an amazing way to return to music in an indoor space.

“[Her] solo in this piece was so emotional and I can’t even begin to express how proud I am of all her hard work and success. The offstage clarinets and triangles plus the space… really brought out the powerful energy this piece had to offer and brought me to tears,” Jiménez said.

The Symphony Orchestra took over for the second half of the program, performing “Blue Cathedral” by Jennifer Higdon and “Firebird Suite” by Igor Stravisnky.

“Firebird Suite” was a performer and audience favorite.

“[Firebird] has such a special place in my heart, and I am so grateful for being able to perform it with the symphony,” Jiménez said.

Rains, an audience member for this portion of the concert, said this was her favorite piece, as the audience was able to see each section of the symphony shine.

This event also left music majors hungry for more, hoping that their craft will be better appreciated going forward. Rains emphasized the hardship of being a music major while also expressing hope that the larger public will be more appreciative of the arts.

“SDSU’s music program has an amazing group of people that constantly juggle their personal lives, a million one-unit classes, and the stress of mastering their craft,” Rains said. “Even if you aren’t a music student or a fan of classical music you should definitely take the time to see what we do here in the music building. My peers have been so inspiring to me and I’m so thankful to have had that experience with them as an audience member.”