The Wolf Pack are on the hunt this week at SDSU 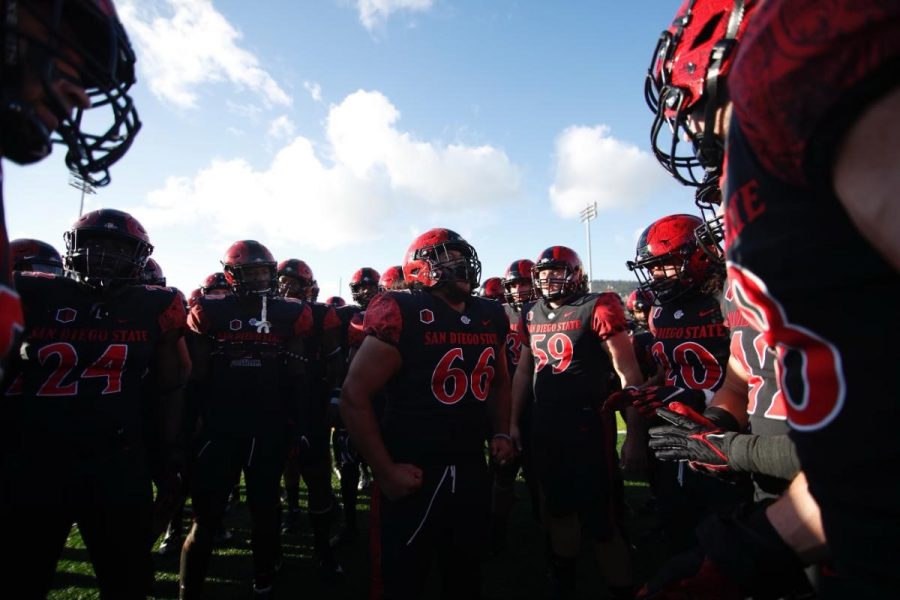 The Aztecs getting amped up before their game against Hawaii.

After getting back on track, the San Diego State Aztecs (8-1, 4-1 Mountain West Conference) look to continue their winning ways this week when the University of Nevada Wolf Pack (7-2, 4-1 MWC) come to town on Saturday, Nov. 13.

Both teams are coming off highly contested victories: for the Aztecs, a 17-10 win at Hawaii, and for the Wolf Pack, a 27-24 win at home against the San Jose State Spartans. A win is a win, though both teams were expected to win much more handily as heavy favorites. This week has the prognosticators stumped, SDSU opens at -1, essentially a pick’em.

This matchup has been highly competitive historically. These two teams have faced each other every year since 2012 — the Aztecs have won five of the nine contests during that stretch. However, the Wolf Pack has won each of the last three meetings by a single possession.

“This is a great football team that is coming into Carson that we’re going to go up against,” SDSU head coach Brady Hoke said.

Nevada’s offensive coordinator, Matt Mumme, was literally born into the Air Raid offense. As such, the Wolf Pack employs the pass-heavy system. Nevada has a 34% to 66% run-to-pass-ratio.

The Wolf Pack enters this matchup with the highest scoring offense the Aztecs have faced this season, and have only been held under 30 points three times this year, averaging 36.4 points per game — a MWC-best.

Nevada features the most prolific passing attack the Aztecs have seen all year. Dubbed the “Pack Attack,” Nevada’s offense is led by junior quarterback Carson Strong. After a very good 2020 campaign, albeit during a COVID-19 truncated season, Strong received NFL draft buzz. A year later, he’s back in the midst of another strong season and it seems he is NFL bound.

“To me [Carson] is a prototypical pro quarterback,” Hoke said. “He’s rangy, he’s tall, has a really good arm, gets rid of the ball, can make all the throws and moves well enough.”

Nevada has the third highest gaining air attack in the NCAA. Strong leads all MWC passers in every major statistic. But a quarterback is only as good as his pass-catchers. Nevada has three players with more than 45 receptions — the other 11 MWC teams have five combined and no team features more than one.

Senior cornerback Tayler Hawkins and the rest of the SDSU defense understand the challenge but are looking forward to it.

“We get up for every game as a defense. We have high expectations and goals for ourselves,” Hawkins said. “These receivers are definitely talented and have a lot of speed. We have to stay disciplined in coverage and stay disciplined in our assignments because one little mistake could be a touchdown.”

The ground game for Nevada appears nonexistent. The Wolf Pack’s 229 rush attempts are the third fewest in the country, and they have the second fewest rushing yards in the NCAA. It is not all due to a lack of trying either. When they do run, Nevada has the fourth worst yards per rush in college football.

Nevada’s defense isn’t anything to write home about. The Wolf Pack ranks middle of the pack in total defense and scoring defense in both NCAA and the MWC. The run defense and pass defense rank slightly above the mean and slightly below it respectively.

The Wolf Pack does excel in getting after the quarterback. Their 33 sacks ties the second-highest total in the NCAA. This ability to pressure the QB also helps them get takeaways. Nevada’s 11 interceptions is tied for the MWC-best.

Nevada has shown a tendency to be a one-dimensional team, they throw the ball and don’t do much else. However, what they do, they do well. They have thrown the ball all over the yard and have protected the football while doing it — they have the third-best turnover margin in the NCAA. The Aztecs will need to steal a possession, protect the ball and keep the Pack Attack on the sideline. If they can do that, they will advance to 9-1.