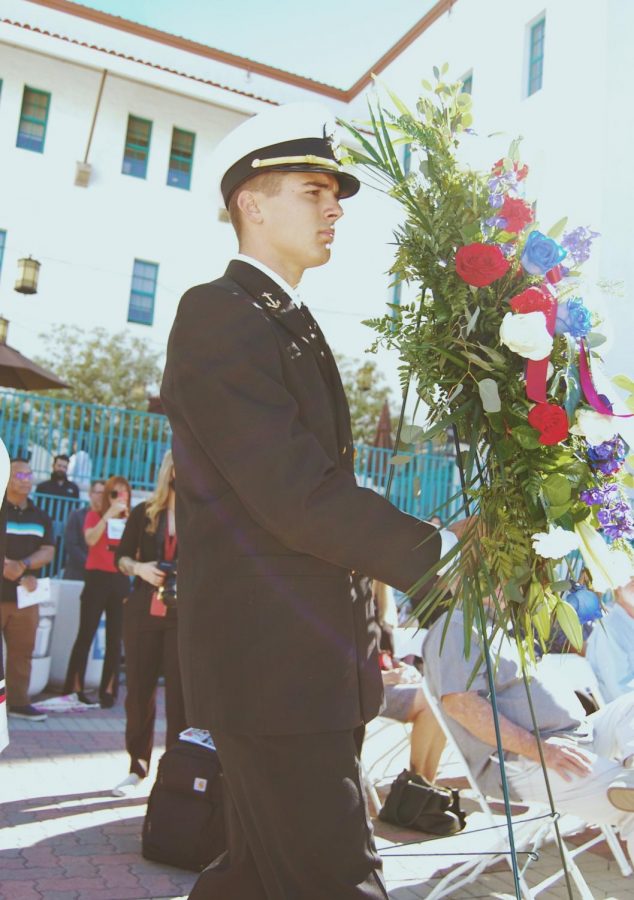 The ceremony, organized by the SDSU Alumni Association and the SDSU War Memorial Committee, was held in front of the university’s War Memorial located just west of the Conrad Prebys Aztec Student Union.

The memorial is a giant monolith reminiscent of the Washington Memorial in Washington D.C. which was designed by former SDSU art professor Juan Dominguez in 1996. Its height of 25 feet stands solemnly adjacent to the Student Union and the Cal Coast Open Air Theatre. Etched upon each side of the memorial are the names of the 239 SDSU students lost in military conflicts such as World War II, Korea, Vietnam, Afghanistan and Iraq.

“It is always important to recognize those who have served our country and paid the ultimate price of sacrifice,” SDSU alumni relations specialist Jen Renallo said. “It is important to note that, while this ceremony is taking place the day after Veterans Day, we do it every year at homecoming to remember our former Aztecs who have served and did not make it home.”

Members of the SDSU ROTC Honor Guard presented the colors, while the Marine Band San Diego played the National Anthem as a solemn opening to the ceremony.

The wreath laying ceremony attracted SDSU students, faculty, alumni, as well as both active duty service members and veterans. The county of San Diego holds the nation’s largest concentration of military personnel and over 200,000 veterans reside in the city of San Diego alone, making ceremonies such as the homecoming ceremony a community affair.

“We have a unique experience here at San Diego State. At most campuses, whether public or private, you won’t find an annual wreath laying ceremony,” de la Torre said. “You also won’t find this kind of free standing monument like this one, honoring former students who perished in service to our country.”

De la Torre also mentioned the university’s past and present actions towards easing the transition of veterans into civilian life.

“At SDSU, there are more than 4,700 military connected students, including veterans. We are proud to have them as important members of our diverse community. Our military-veteran programs are consistently ranked in the top, in the best of the nation,” de la Torre said.

Jack R. McGroy, a former Aztec, as well as a former Marine Corps Lieutenant and current California State University Board of Trustees member was given the honor of keynote speaker for the ceremony. McGroy reflected on his time in the military, and how it guided him towards a career of public service as City Manager for the city of San Diego from 1991 to 1997.

“All of my family members served in World War II, and I would always listen to their stories. The day after I graduated college, a draft notice showed up [for the Vietnam War] and I suddenly had to pick a branch of the military to serve in,” McGroy said.

Members of the SDSU Student Veteran Organization read the names of the 239 SDSU students lost in military conflict while selected veterans and members of SDSU ROTC Honor Guard carried wreaths and flowers to the base of the memorial.

A moment of silence, as well as the playing of taps by the Marine Band San Diego followed the reading of the names. A reception was held directly after the ceremony in the student union for attendees and organizers of the ceremony.