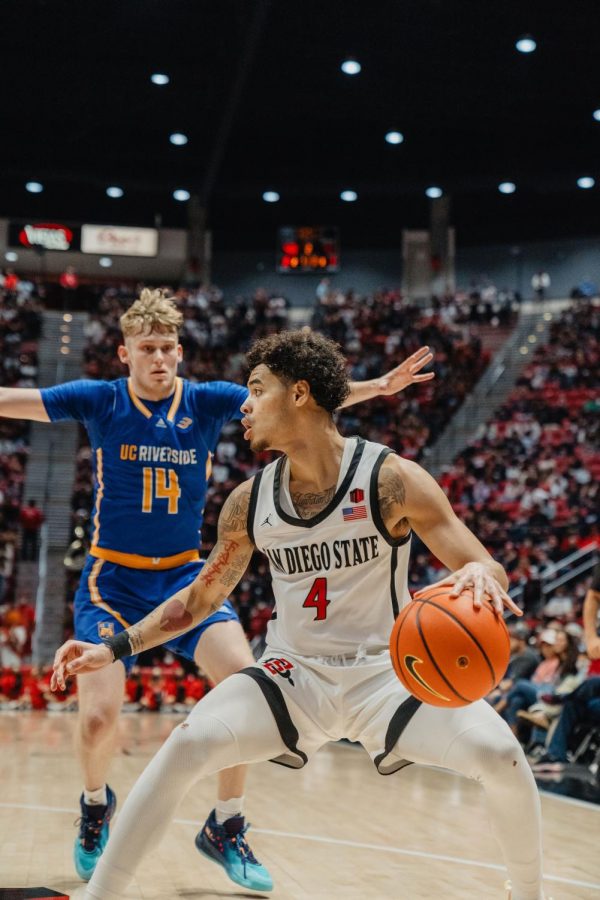 “Back to work today. Big game against Arizona State on Thursday,” Head coach Brian Dutcher said, during his weekly press conference as San Diego State (1-1) has no time to look back at their narrow defeat against BYU last Friday. The team returns to Viejas Arena Thursday at 7:30 p.m. for a resume-building matchup against the Arizona State Sun Devils (2-1).

The Aztecs find themselves in unknown territory as the team is looking to avoid a losing record for the first time since 2011, which came in their season opener against Syracuse in an abnormal game played outdoors on the USS Midway.

The Sun Devils have had success in this matchup over the years as they post a 4-1 record against the Scarlet and Black however the Aztecs won 80-68 last year in Tempe, Arizona. Senior forward Nathan Mensah posted 17 points and 15 rebounds. He may see success again as the Sun Devils are undersized relative to Mensah at the forward position.

Both teams have question marks regarding their roster.  In particular, who will be healthy is the biggest question that the Sun Devils face.

The Sun Devils were without four players in their first two games of the year due to COVID-19 protocols, which included junior forward Jalen Graham and sophomore guard Jay Heath who averaged 14.5 points last season at Boston College. Graham scored 10 points in his debut Monday against North Florida and Heath added four.

While the Sun Devils may have reclaimed important weapons to their team, they may be without returning sophomore Marcus Bagley, who injured his knee in Monday’s game and didn’t return. Bagley averaged 10.8 points per game last season and missed last year’s matchup against the Aztecs due to a knee injury.

SDSU’s roster issues stem from a lack of sound chemistry and efficiency.

The Aztecs have a deep roster exhibited in the first two games as they’ve used 11 players in each game.

“I didn’t think I’d play 11 in the first two games, but it all depends on the circumstances of the game. The bench could be as short as seven or eight or obviously as long as 11,” Dutcher said.

Dutcher took responsibility as he stated that figuring out what the best lineups are is something the coaches will have to work through.

With the Aztecs adding new talent to the roster, Dutcher admits there have been growing pains in learning the offense.

“Offensively wise, we aren’t crisp enough. Some of the new guys aren’t running it efficiently enough,” Dutcher said. “We’ll get to that point, but we aren’t there yet.”

The lack of team chemistry may explain why the Aztecs are struggling to get open looks and are shooting just 15% from three on the season. Dutcher said he wants the team to remain confident in their jumpers and to take the threes in rhythm.

Dutcher jokes, “If we can’t start making a few, we’ll get Matt Araiza over to start drop-kicking them in.”

While the Aztecs may have unknowns on the offensive end, their defense has remained stifling.

“We always bring it defensively; we always play hard and that’s how we’re staying in these games because of our effort and energy,” Dutcher said as the Aztecs forced a dangerous BYU team to shoot 22% from three last game.

The Aztecs will need another strong defensive effort against Arizona State. Dutcher said the team is fortunate to have extra time to prepare for the unique style of play from the Sun Devils.

Dutcher fears the Sun Devils offensively, calling them dangerous through their fast-paced attack and eagerness to take open threes.

Dutcher said, “this game will be at a lot faster pace than the previous two games we’ve played.”

Dutcher emphasized that the team is looking forward to getting back to the friendly confines of Viejas Arena on Nov. 18 at 7:30 p.m., 12,414 fans will need to show up loud and proud as the Aztecs will look to bounce back with a resume-building win.