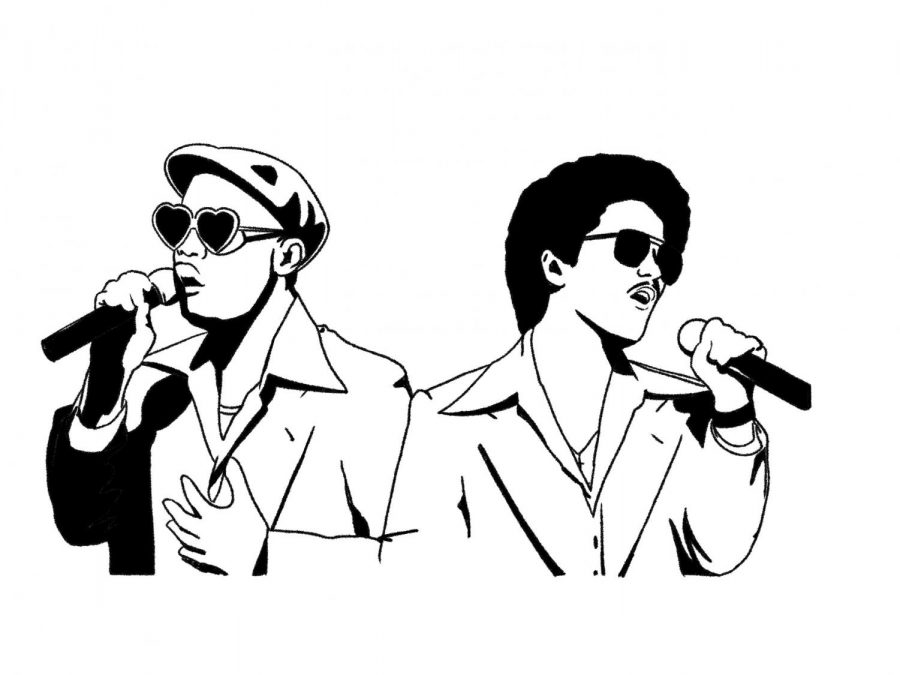 With sky high expectations for a project (especially a debut) it’s nearly impossible to impress everyone, even more so when the bar has already been set so high with their previous solo projects. Additionally, high-profile collaborations don’t always have the best track record, and this superstar formula often produces more duds than thuds.

But in many ways, Silk Sonic delivered the “intergalactic funk” they promised.

Considering Paak. and Mars’ careers are adorned with old-school homage, it’s not surprising their debut leaned so heavily on nostalgia. The album has only nine tracks, but is prime for many replays.

Not unlike their solo projects, Paak and Mars perform much of the album on their own. P-Funk legend Bootsy Collins, an architect of Parliament-Funkadelic’s trademark sound as a songwriter and bass player for the group, hosts the album and gives an authentic sense of ‘70s appreciation. The features were minimal with only Collins randomly scattering adlibs and internal monologues like a better-placed (and actually talented) DJ Khaled on various tracks and jazz fusion god Thundercat who appears on “After Last Night.”

Starting off strong as ever, “Leave The Door Open” is excellent, and an especially wise choice for a first single to lift this already-famous duo to an unimaginable stratosphere. With sex appeal, chart appeal and lasting relevance, it set a high standard for the project due to its high placement in the album and their rollout.

However, it set expectations the rest of the project struggled to match up to at times. Many of their songs set ablaze but not with the same fire and passion as the bonfire of “Leave The Door Open.”

Capitalizing off the initial high, the middle section of the album from “Fly As Me” to “Put On A Smile” keeps things groovy. “Fly as Me” is light-hearted and the exact area where Paak. shines — right between the intersection of cocky rap and smooth-talking R&B.

“After Last Night” follows a pair of players getting thrown off their axis by a romantic night. Trying to replicate this lustful feeling, they’re in a hazy, desperate mood. Thundercat’s bass-playing and Collins’ creates an intoxicating environment perfect for endless harmonies and loving appeals.

Then there’s “Smokin Out The Window,” a tune where the duo are finishing each other’s thoughts and are arguably at their most comfortable with chemistry bouncing off the walls. It would be amazing to see it performed in concert, especially if Paak keeps selling the feeling of the line “not to be dramatic but I wanna die.”

Mars shines on “Put On A Smile,” a track right in his emotional pleading wheelhouse. When Mars sings his last “I’m dyiiiiiiiiiiiing,” there’s lots of pain left on the table, providing an emotional core for an album mostly centered on smiling adventures. When Mars is crooning for a second chance and playing the fool, every heartbreak feels like catching a grenade.

The album began to teeter as “777” emerged as a shaky part of the album’s winding down. Like the chaotic night out in Las Vegas it portrays, the duo rolls the dice on this track, but instead of coming up big, they throw off the rhythm built up by previous songs.

“Skate” strolls in with nostalgia and is too refined to capitalize on its sweet messaging, with a feeling like it was made in a generic hit factory. It’s a bit too resemblant of a tune you’d hear perusing the aisles of JC Penney, but still sounds alright, nonetheless. There’s no doubt this will get significant air time in any existing roller rink in the nation.

Finishing strong and flying high, “Blast Off” is both satisfying and gets the old-school feeling back. It’s a proper outro for an album which treats its audience with care.

Despite the big reaction it received, what was supposed to be the release of the year got a bit overshadowed by the release of “Red (Taylor’s Version)” — and both albums will almost certainly get overtaken by Adele’s “30” album releasing Nov. 19. Because of this, “An Evening With Silk Sonic” almost failed to fully capitalize on the hype. For an album this fun, a summer release would have been the most ideal landing spot.

There may have been too much reliance on nostalgia, and not enough of their own artistic expression on some of the songs, resulting in an end product that’s a little too tame. The biggest difference between listening to this and a ‘70s funk album is noticing the room for improvisation that’s substituted for a straight edge radio play sound. But even with these flaws, their talent still shines through enough.