Aztecs get a gritty victory over UNLV as the “Passin” Rebels put up nearly 400 yards of offense. 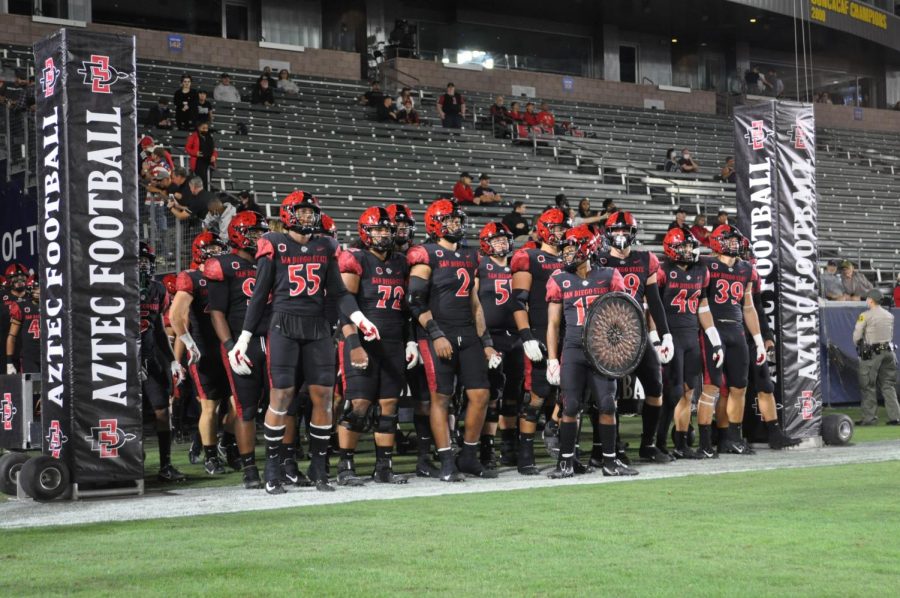 SDSU prepares to take the field in a game against Nevada on Nov. 13.

No. 19 San Diego State (10-1, 6-1 Mountain West Conference) — on the verge of one of their best seasons ever — got to double-digit wins for the fifth time in seven years, control their destiny in their conference and can record 12 or 13 wins for the first time in school history. Still, head coach Brady Hoke isn’t satisfied with the team’s 28-20 victory over the UNLV Rebels (2-9, 2-5 MWC).

“They’re (wins) not always pretty. I didn’t think we played Aztec football,” Hoke said. “We’ve got to do a better job and coach better.”

Surprisingly, the struggles came from the defensive side of the ball in containing a player that the Aztecs likely had minimal preparation for. The Rebels starting quarterback, freshman Cameron Friel, seemed to switch jerseys tonight as he gifted the Aztecs a touchdown as senior linebacker Andrew Aleki got the scoring started for SDSU with his second pick-six this season to give the Aztecs a 7-3 lead.

However, with 13 minutes remaining in the second quarter, Friel was sacked and couldn’t put weight on his foot, after which he was carted off the field as a result. Junior backup quarterback Justin Rogers checked in and changed the tone of the game.

Rogers immediately led a five-play, 92-yard drive for a touchdown. The score came from a blown defensive assignment as Rebels sophomore receiver Zyell Griffin ran wide open into the brand new end zone at Allegiant Stadium to give the Rebels a 10-7 lead.

Getting beat in pass coverage was a theme in the game, as the Rebels opened the second half with an 80-yard reception to keep the Aztec defense on its heels.

Rogers continued to throw dimes all night and finished with 305 passing yards.

While Hoke may have been dissatisfied with the lackluster defensive performance, he was encouraged by the resiliency of the team and our offense. Junior receiver Jesse Matthews displayed the team’s toughness.

“We go into every game expecting to win, we’re mentally tough,” Matthews said. “It’s what we’re all about here at San Diego State.”

Along with all the offensive scores, Matthews finished with nine catches and 75 yards.

Hoke credited Johnson’s decision-making and emphasized the talent of Matthews.

“Jesse is always a guy who works hard and is fun to watch,” Hoke said. “I think he’s something special.”

No touchdown was more important than the Aztecs final scoring drive of the game.

With 5:35 remaining on the clock, the Aztecs led 21-20 and Hoke had a decision to make as it was fourth and one1 at the UNLV 13-yard line. After bringing on junior kicker/punter Matt Araiza to the field, Hoke called a timeout to rethink. After the timeout, the offense came back out on the field.

When asked about his decision to go for it instead of kick, Hoke was brutally honest.

“I’ll be real honest, I thought it might’ve been a dumb decision when we could’ve gone up four points,” Hoke said. However, Hoke continued to look up at the scoreboard and see the passing numbers from the opposing side.

“I never think this a whole lot, but I didn’t know if we could stop them,” Hoke said.

The decision — thankfully for Hoke — turned out to be the correct one.

Senior running back Greg Bell ran for a two-yard gain to get the first down. Johnson then concluded the drive with a perfect pass to Matthews for the touchdown to give the Aztecs the winning score of 28-20.

The defense may have been disappointing compared to the Aztec elite standards, but they rose to the occasion with the game on the line as senior Seyddrick Lakalaka intercepted Rogers to seal the victory.

It wouldn’t be an Aztec writeup without mentioning their world-class special team’s player, Araiza, who had two punts that nearly went 60 yards. However, he excelled in pinning the Rebels deep on their side of the field. He recorded five punts downed inside of the 20, highlighted by his final punt of the day that sat on the UNLV 1-yard line.

His punt distance average went down, but he still averages 51.82 which remains ahead of the NCAA single-season record of 50.98.

The Aztecs now hopefully have three games to play which are all regarded as the biggest games of the year. On Nov. 26, the Aztecs return “home” to Carson to play Boise State with the opportunity to win the conference and set up a title game for the Mountain West Championship the following week. Winning both would give SDSU 12 wins on the year, new jewelry for all the player’s fingers, and an opportunity to play in a highly regarded bowl game.

The Aztecs will look to take lessons away from the gritty game with the Rebels and use them to propel forward as they reach the home stretch of the season.