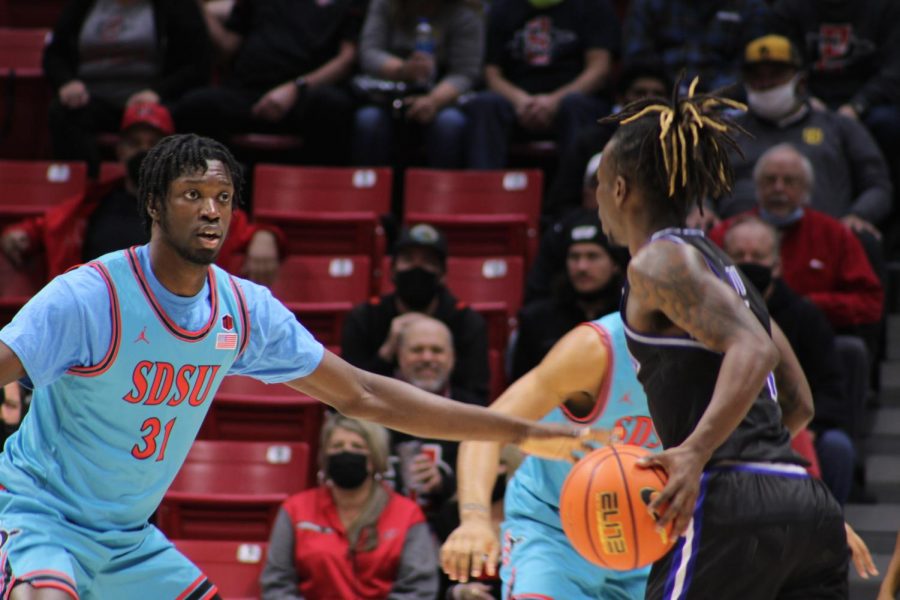 The San Diego State Aztecs came into Tuesday’s game against Long Beach State looking to bounce back after scoring only 43 points against USC last Friday, the lowest scoring output for the program since 2015.

Long Beach was leading 13-12 with just over 11 minutes left in the first half. Coming off a media timeout, senior guard Trey Pulliam got a steal and finished with a reverse lay-up on the offensive end.

On the next possession, sophomore guard Lamont Butler got a steal on a loose ball turnover and fed Pulliam for his second bucket in a 14-second span.

The Aztecs never looked back and went on a 23-8 run to close out the first half and gave themselves a 35-21 lead at halftime.

“It was nice having a little bit of breathing room today,” head coach Brian Dutcher said. “We created a lead, maintained it and built on it, and so we weren’t playing in the nail biter like we played in the last couple of games.”

SDSU gave little breathing room to Long Beach shooters and held them scoreless behind the three-point line and 33 percent from the field.

The Beach had 22 trips to the free-throw line and only converted on 50 percent of their attempts. The Aztec student section, “The Show”, didn’t make it easy for Long Beach free-throw shooters and coach Dutcher made sure to give them credit.

“The student section was great today,” Dutcher said. “They were on the other team even to the end at the foul line. It’s always fun to watch them and how creative they are and how much they help the team.”

Pulliam led all scorers with 16 points and shot an efficient 7-for-9 from the field. The Aztecs got 25 points from its bench led by sophomore guard Keith Dinwiddie Jr.’s 12 points.

Because of an injury to senior guard Adam Seiko against Georgetown and Butler’s wrist injury after a dunk against Long Beach, Dinwiddie Jr. will have an expanded role in the Aztecs’ next games.

“He works hard every day,” Pulliam said of Dinwiddie Jr. “He’s there early (at practice) working on his craft, and man he hasn’t given up. So I mean that’s the biggest thing and you can tell defensively he’s in the right spots.”

The 12 points Dinwiddie Jr. scored is his highest output of the season. Coming into the game, his previous high was three points.

The Aztecs’ next game has them traveling across the country to face No. 24 University of Michigan in Ann Arbor on Saturday at 10:00 a.m. PST.