Aztecs take on the Aggies in the Mountain West Conference championship 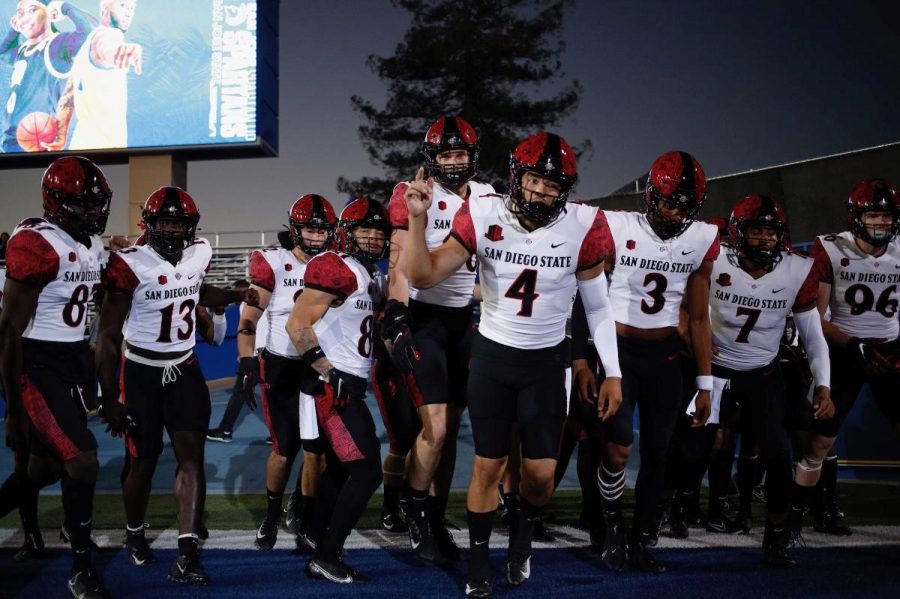 The Aztecs are playing for their 22nd conference title — the fourth since they joined the MWC in 2000. Most recently the Aztecs were back-to-back MWC champs in 2015 and 2016 under former head coach Rocky Long. The Aggies aren’t as decorated — they are trying for their 13th conference title and their first since joining the MWC in 2013. This is the second time the Aggies will be representing the MW Mountain division in the conference game — the first being a 24-17 loss to Fresno State in 2013.

To say the Aztecs have dominated this matchup historically is an understatement. The Aztecs are 13-2 all-time against the Aggies winning by an average margin of 19-points — including a 38-7 shellacking last year.

“It’s a different team, in fact, both teams are different,” Hoke said during a press conference. “Obviously year to year things change, things get better, sometimes they get worse.”

The oddsmakers like the Aztecs again this week — making them six-point favorites this weekend. However, the Aztecs are barely over .500 this year against the spread — 6-5-1. The Aggies on the other hand are a perfect 6-0 this year on the road and a much more reliable 8-4 ATS.

What the prognosticators have to say doesn’t matter to Utah State head coach Blake Anderson and his team.

“[The Aggies] have been underdogs pretty much all year and that’s fine. We expect to be the same again this week,” Anderson said. “This is a very ‘chip-on-your-shoulder, blue-collar’ group of dudes and there will be a chip on their shoulder going into Saturday which is exactly where I want it to be.

Utah State boasts the second-highest gaining and the third-highest scoring offense in the MWC. The Aggies operate out of a very balanced offense; they have a 52% to 48% run-to-pass ratio.

The Aggies trot out an elite passing game — 15th in the NCAA in yards and eighth in passing scores. The air attack is marshaled by junior quarterback Logan Bonner — who is coming off his best performance of the season which he threw for over 300 yards, almost 70% completion percentage, five touchdowns and zero interceptions in a 35-10 win over the Lobos.

“Number one I think [Bonner] is pretty doggone accurate,” Hoke said, “You can just see the leadership that he has. Believe me, we’ve had some really good quarterbacks in this league this year and he doesn’t take a backseat to any of them.”

Senior wide receiver Deven Thompkins is on the receiving end of a lot of this production. Thompkins’ 87 receptions are the second most in the MWC and account for a third of the Aggies’ total completions. His 1543 receiving yards lead the entire NCAA and makeup 42% of the team’s passing production.

“I think [Thompkins] has a great feel for getting open. I think he’s got really good change direction with speed, really disciplined in routes, and very good hands obviously,” Hoke said, “I think he’s probably as tough a guy there is that we’re gonna have to line up against and do our best.”

The Aggies are committed to the run game for the sake of a balanced offense. The Aggies’ 492 rush attempts are the 24th most in the NCAA but their 3.7 yards per attempt is 97th in the NCAA. This averages out to the middle of the pack in total yards for the NCAA.

“[The Aggies have] the ability to run the ball at least efficiently, not so much explosively but efficiently,” Anderson said. “[It is] effectively enough to stay balanced against really good defensive fronts.”

The Aggies’ defense is run-of-the-mill. This unit ranks right around average in almost every single metric. It culminates in an NCAA average of 26.3 points surrendered per game and a slightly below average of 397.3 total yards allowed per game.

The only department that Utah State’s defense excels in is tackles-for-a-loss where their 95 total TFLs are the fourth most in college football.

Over the season, the Aztecs have earned the right to sit atop the MWC throne but in order to truly claim conference supremacy they have to cap it off this weekend with a win. The Aztecs are touchdown-favorites but don’t tell that to the Aggies. Utah State is 4-2 this season when underdogs — including a 26-23 win over the Washington State Cougars after being 17.5-point dogs. With the explosiveness of Utah State’s air attack and the championship game intensity, everyone must be on their A-game.