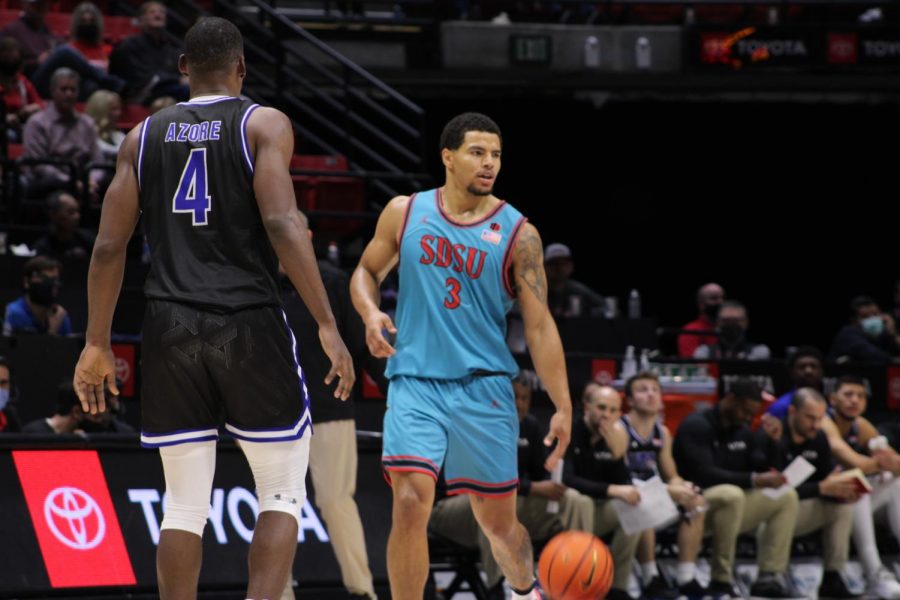 Matt Bradley looks to begin a play during SDSU's game against UT Arlington. Bradley had 22 points against the Michigan Wolverines.

A familiar scene was playing out at the Crisler Center between the No. 24 Michigan Wolverines (5-3) and the San Diego State Aztecs (5-3).

The Aztecs were, once again, unable to make a shot and picked up five fouls within the first eight minutes of the game.

Meanwhile, the Wolverines were making mincemeat of the vaunted SDSU defense, dropping three-point buckets with ease and boxing out Aztec shooters whenever they dared enter the paint.

Even though the Aztecs hung with the Wolverines for as long as they could,  a constant volley of three-pointers and a full-court press reinforced with adamantium sank the Scarlet and Black 72-58.

“When you run into a team that shoots high percentage from three, especially in their home gym, it’s hard to get a win,” head coach Brian Dutcher said in a post-game conference. “Obviously, we rolled the dice and they made a lot of threes and that always wins college games.”

For the first 20 minutes of play, the 12,532 fans in attendance (mostly sporting yellow but with a smattering of red) were treated to quite the show. The Aztecs had dug themselves out of a ten-point hole and were only down by two points heading into halftime.

But then the second half started.

Wolverines head coach Juwan Howard — sensing that SDSU was starting to wobble under pressure — unleashed a full-court press in an attempt to sweep the Aztecs’ legs.

It worked to a devastating effect. Michigan defenders hounded the Aztecs in the backcourt, refusing to give them any room to maneuver or even pass.

The result? Turnovers, turnovers and, yes, more turnovers — eight of them in a span of 12 possessions as a matter of fact.

It totaled up to nine in the second half and 16 for the game. Michigan thanked the Aztecs for their early Christmas spirit of giving by scoring 15 points off of takeaways.

Dutcher noticed that Michigan played particularly hard on senior point guard Trey Pulliam on the press. With a fatigued Pulliam, the rest of the team struggled to gain momentum.

Senior Matt Bradley continued to find his offensive rhythm, scoring 22 points on 9-of-16 shooting. He also had five turnovers, a result of mental mistakes that Bradley acknowledged after the game.

“I think I had the same opportunities but I made too many turnovers,” Bradley said. “I think there was plays that were really careless of me. Because I started making careless plays, the team did as well.”

The Aztecs will catch a flight back to San Diego and welcome Cal State Fullerton to Viejas Arena on Wednesday.