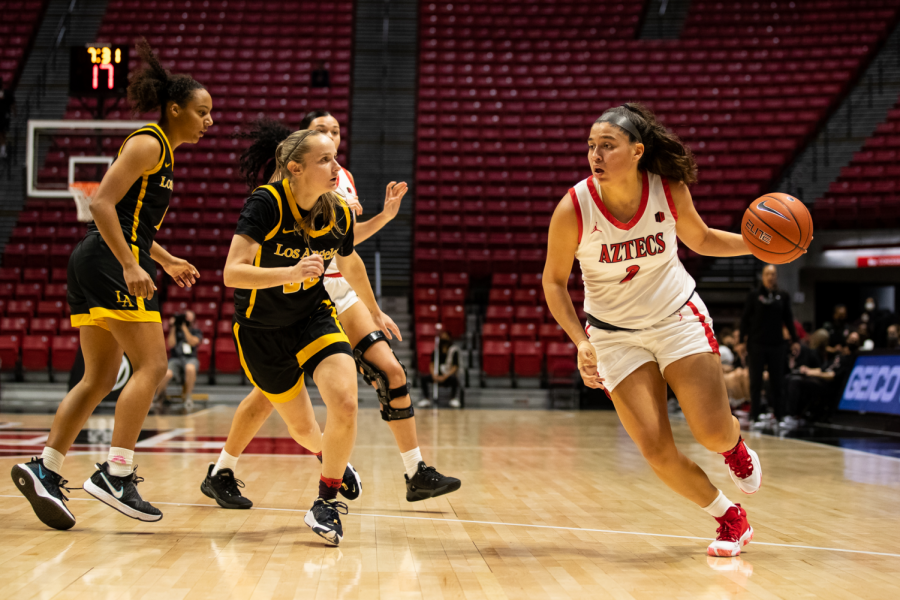 Despite a 19-point performance from senior Sophia Ramos, the San Diego State Aztecs (4-4) fell to the University of San Diego Toreros (5-2) 63-51.

The Aztecs suffered their third straight loss while also dropping their first match at Viejas Arena this season. The Scarlet and Black have a chance to snap their three-game losing streak on Dec. 8 on the road against the California Baptist University Lancers.

SDSU couldn’t find their rhythm on the floor all night as many of the shots they took were not falling. On the night, they shot 36% from the field and 20% from the three-point line.

Entering halftime, SDSU was only trailing by two and doing a good job defensively keeping up with the Toreros. Following the half, the Aztecs could not seem to find their rhythm shooting the ball, giving up an 11-1 run in the third quarter which completely shifted the momentum of the game.

In the fourth quarter, the Aztecs attempted to battle back and overcome the momentum that the Toreros had but it was obvious that it was not the Aztecs’ night.

Alongside Ramos’ 19 points, freshman Asia Avinger contributed 16 points herself. Ramos and Avinger were the only ones who were able to score double-digit points as the third-highest scorer was senior Kiara Edwards with only six points. The poor shooting led to the Aztecs having only three assists on the night, which makes it seem as if the team was not playing together.

“I think it was pretty evident today was not our best shooting day. We are not going to shoot this poorly every single game, so our numbers should go up based on that” Ramos said when asked about the team’s shooting performance and assists numbers. “I think once we get into our rhythm again with shooting, our assists number will go up.”

As the beginning of the conference schedule is only three games away, it is imperative that the Aztecs are able to improve on their mistakes and snap their current losing streak.

“Toughness and execution on the defensive end. We need to focus on understanding where the shooters are and defending a little better,” Head coach Stacie Terry-Hutson said about the team’s focal point in their upcoming practices.

The game against Cal Baptist will be interesting to watch and see if the week break proves to be beneficial for the Aztecs. There is still plenty of time left for the Aztecs to improve on their mistakes and be ready to be one of the top contenders in the Mountain West Conference.