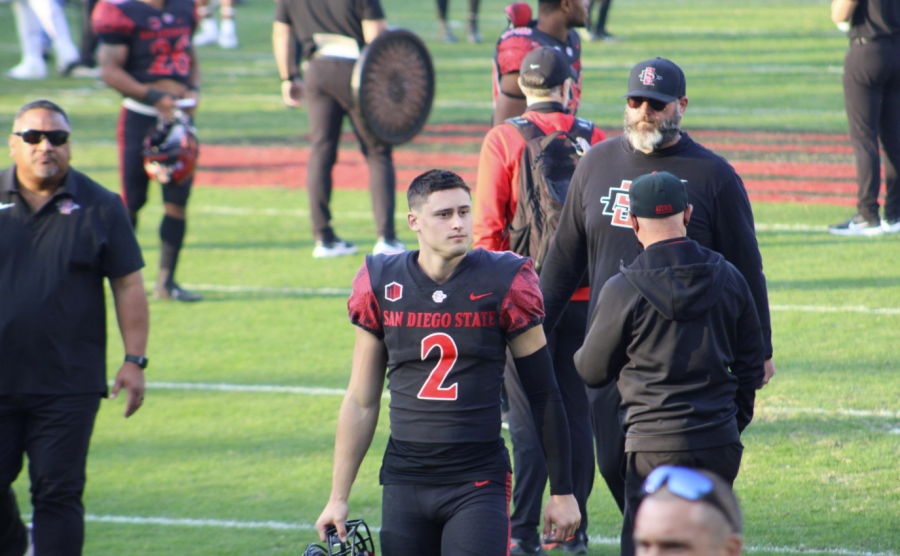 Matt Araiza walks off the field after a game (Photo Courtesy of Paul Garrison/EVT).

He owns the NCAA record for most punts of 50-plus and 60-plus yards. He blasted a football into the opposing endzone… from his own 12-yard line.

He has been called both a stallion and a stud by former NFL punter Pat McAfee, who may be the most well-known punter of his generation. SDSU play-by-play announcer Ted Leitner — who has called Aztec football games since 1979 — calls him the best punter he has ever seen.

Throughout the entire season, fans and analysts alike have hailed him as the best punter in the nation, better than even some in the NFL. Some even clamored for him to be named a finalist for the Heisman Trophy.

Heisman, he was not. Ray Guy Award winner? That he is.

“I wasn’t sure that I would win it,” Araiza said in a press conference after the ESPN broadcast. “When I noticed that they only kept going to the winners, and they weren’t going to any of the finalists, I kind of had a hunch. But it didn’t really feel real until they really called my name.”

The Ray Guy Award is named after College and Pro Football Hall of Famer Ray Guy and is given to the nation’s best collegiate punter.

Along with Araiza, Rutgers’ Adam Korsak and Penn State’s Jordan Stout were the other two finalists for the award.

The junior punter is the first Aztec to receive a major postseason award in program history. SDSU has come close in the past. Running back Donnel Pumphrey was named a finalist for the 2016 Doak Walker Award and running back Marshall Faulk came in second place to Miami quarterback Gino Torretta for the 1992 Heisman Trophy.

“Here in our creed we talk about past, present and future Aztec warriors,” Araiza said. “So I think this award has put me in a really unique position that, hopefully, I brought some honor to the past Aztec warriors and, hopefully, opened the door to the future generations.”

Based purely on stats, it was hard not to give the award to Araiza.

In the season opener against New Mexico State, he skied the ball nine times for an average of 56.8 yards — good for a school record.

He leads the NCAA in total punting yards (3904) and his average of 51.37 yards per punt has the potential to break the NCAA record for average yards per punt.

He isn’t afraid to run down the field and throw his shoulder pads around either, as he has three solo tackles while assisting in three others.

So, what’s next for the junior out of Rancho Bernardo High School?

Well… he is taking it one game at a time. After all, SDSU does have a date with the 12-1 UTSA Roadrunners at the Frisco Bowl.

If the Aztecs win, it will be their twelfth win of the season, something no SDSU football squad has ever accomplished.

“I’m more focused on this game coming up,” Araiza said. “It’s our opportunity to be the winningest team in school history. There’s never been a team before that has 12 wins.”