SDSU Hockey moves up to Division 1 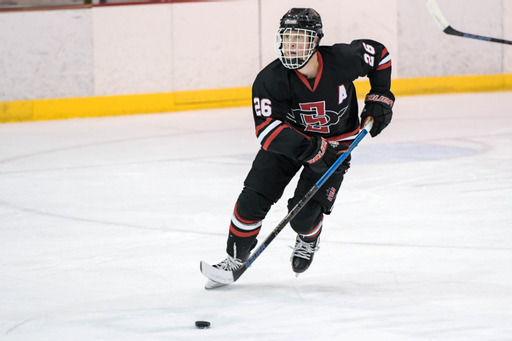 On Aug. 9, 1988, the biggest trade in hockey, if not sports, history went down. The Edmonton Oilers traded Wayne Gretzky — the greatest NHLer of all time at the prime of his career — to the Los Angeles Kings. The all-time NHL leader in goals and assists moving to L.A. was monumental for the entire state of California, resulting in two more NHL teams — the Anaheim Ducks and San Jose Sharks — joining the league over the next six seasons.

The impacts of that trade are still felt today, as hockey continues to popularize in the Golden State. That includes San Diego State which — on Monday, Nov. 11 — became the first Division 1 hockey program in California.

Head coach Phillip Bateman, who began heading the program six seasons ago, noted bringing D1 hockey to Southern California was always his goal when he took over. He said SDSU had “gained a more serious reputation” among college hockey programs.

“This school had the scope to take that on its shoulder, [and] be the first school in California to gain Division 1 status,” Bateman said “I gave it five years.”

Bateman reveled in telling his players of this promotion. He said it was “One of those ‘Are you serious!?’ moments. Felt like getting a puppy for Christmas. They all recognize what it means. They were all really excited.”

He largely had to take on this challenge himself. He had to produce a 45-page application to the American Collegiate Hockey Association (ACHA), with the university’s middling support.

“The university may have not even thought of it [becoming Division 1]. I put all the work together, I don’t think they knew actually how big it was,” Bateman said.

At 9-3, SDSU is having one of the best starts the program has ever had, but that means little to the committee approving the team’s application. The coach noted, “the criteria (for joining Division 1) was more (about) broadening the game and opening up avenues for the game to expand… we are the pinnacle for western hockey, outside Arizona.”

Bateman also pointed out recruiting will become incredibly easier and said local talent will have the opportunity to play the highest level of collegiate hockey while staying in-state.

“I’m just happy for all the kids in California that get this opportunity,” Bateman said. “They’re gonna be part of a very popular hockey program.”

Next season, the Aztecs will have to play at least 20 games against fellow Division 1 opponents. That stretch will be tough. Their games will be much more competitive than the multiple double-digit wins the team has put up this season. Opposing teams will have players with professional hockey aspirations, including some who could make the NHL.

SDSU will also be gaining some top athletes over the next few seasons. The program will recruit players whot “will have [the] opportunity to keep playing after they leave the college. Some of these kids could get drafted in the NHL, it’s rare, but it’s possible. They can keep playing after leaving here” according to Bateman.

Division 1 hockey will not just be exciting for the players that will have increased competition and spotlight, but also the San Diego community that will have exposure to a higher level of hockey. Local companies will receive exposure as they become sponsors of a Division 1 program and students can intern with and attend games of the highest level of collegiate hockey.

The promotion to Division 1 is a reflection of the outstanding character of everyone within the program since it was started nearly 40 years ago. Bateman said he’s “excited for everyone who has ever put on the jersey… they’re the pioneers that allowed this to happen.”

The team will have some time to marvel in this great news. The team has nearly a two-month break. When they come back, the Scarlet and Black will compete at the Dakota College of Bottineau where the team will play four games in four days on the road trip starting Jan. 14.