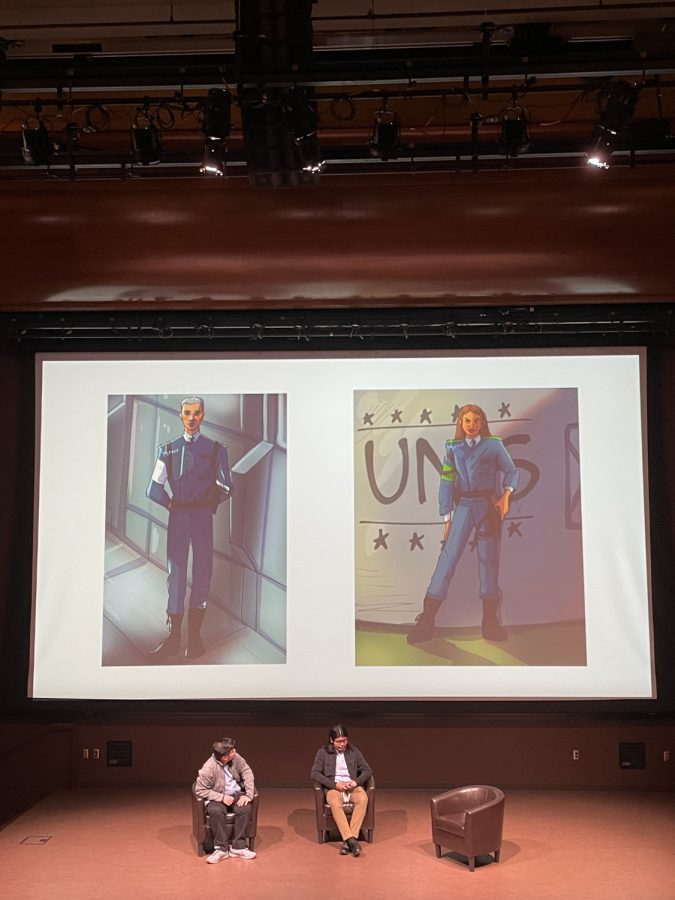 Following the musical's in-person premiere, Irwin held a brief Q&A with the cast, where he showed some concept art based on the story.

For six years, San Diego State mathematics junior Alec Irwin had an idea for a musical rattling around his head. He knew the setting would be outer space and it’d present the wonder of what this endeavor represents.

Irwin said he kept developing his concept while serving in the Navy from 2016 to 2020 and gained more inspiration for his story before eventually starting at SDSU in Fall 2021. Now, at the end of his first semester at SDSU, his long-time passion project is complete.

“It’s honestly surreal because it’s forty minutes of sound but it’s a project that’s been on my mind for years,” Irwin said.

The result of his hard work is the immersive radio-rock musical “Extrastellar,” the story of the intergalactic space fleet Xenot 6 500 in the year 2596 and the interactions they have with inhabitants of the alien planet Argalos (aka planet A-762).

For those unaware of what a radio musical depicts, it is a musical with no visual medium as the audial aspects tell the story and leave how it looks to the viewers’ imagination. This means as the creative force behind the project, Irwin had to rely on sounds and songs to tell a story of distant galaxies and faraway futures.

The musical debuted at the Aztec Student Union Theater on Dec. 12 as an alluring experience for those in the audience. Admission was free, but donations to Aztecs Rock Hunger were encouraged.

When the musical began, sound filled up the theatre and the lights were dimmed down, allowing audience members to let their imaginations run wild in the dark for close to an hour. Orchestral tunes and space sound effects to give a realistic quality to what was going on. After the musical finished, a short Q&A session was held with members of the cast.

The audio experience follows the Xenot 6 fleet, part of the Earth’s Space Force, and representing the United Nations (a distant representation of the organization which currently operates). Irwin voices Captain Darius McCormick, the leader of the human space vessel and the musical’s moral compass. “Extrastellar” begins with McCormick giving his testimony at a court-martial hearing and the remainder of the musical follows him summarizing the events leading up to that moment.

In this futuristic society, space travel has become commercialized and planetary evaluation vessels like the Xenot 6 visit planets to see if they’d be viable as Earth colonies. However, the fleet’s mission soons goes off the rails and McCormick is forced to make a major decision.

“Extrastellar” features prominent themes of colonialism and imperialism and this ulterior motive for expansion always comes with consequences for those who stand in the way. Irwin says the voyeuristic actions taken by the space fleet resemble real-life interventions made by the American government. With this in mind, futuristic space travel presents another realistic avenue for imperialism.

“The idea of a spaceship full of earth explorers landing on a distant planet all for their own fun sake and motivations at the expense of whoever already lives there,” Irwin said. “The reality is it’s not so innocent.”

Fellow SDSU students and friends filled up the rest of the cast, including first year global composition student Gabriel De Guzman who played Private Peterson and helped behind the scenes with sound design, orchestration and editing.

De Guzman says he first heard about “Extrastellar” when Irwin brought up his idea in their MUSIC 160 class. Irwin was looking for people to record vocals and a few students were immediately interested in joining the project, including De Guzman.

“We took all of his music that he had written and we orchestrated it to make it more into an actual musical sound,” De Guzman said.

De Guzman recorded all his vocals and dialogue in a single weekend for his role and was happy with the experience, saying Irwin did a good job of moderating and delegating tasks on-set, despite some of the challenges involved in making such a unique musical. For instance, when recording vocals for the project, all the people working on the project in different parts of the world had to coordinate.

“It was actually a lot of fun and Alec’s guidance and his direction with the project was pretty great,” De Guzman said.

Relying on imagination and intuition, the first thing Irwin knew was he wanted to depict the wondrous feeling of being on a distant planet. With his project completed, listeners can now hear his project and come to their own visual conclusions.