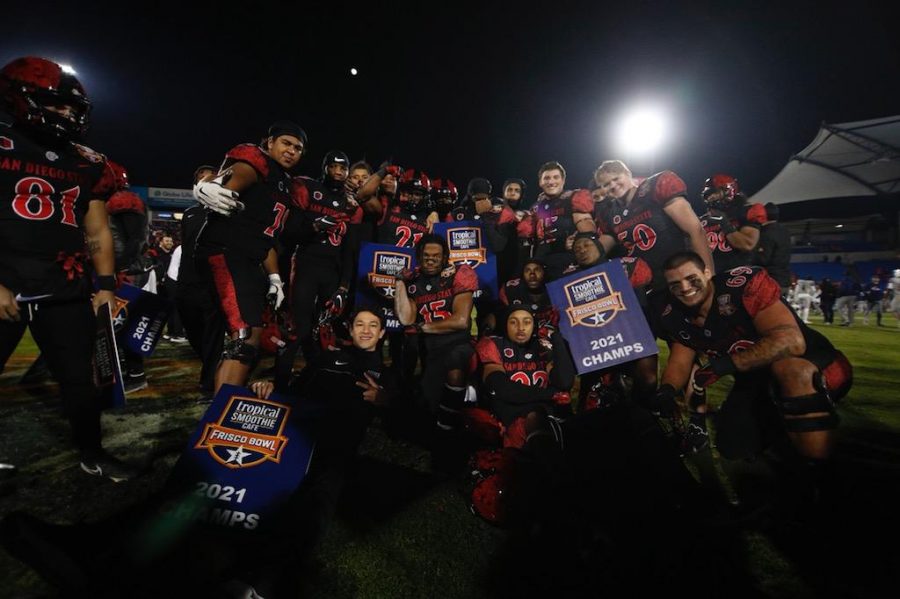 The Aztecs pose with Frisco Bowl Champion banners after their 38-24 victory over UTSA in the Frisco Bowl (Photo Courtesy of SDSU Athletics/Justin Truong).

It has been nearly a month since families around the country ate Thanksgiving dinner.

Those same families will have to wait a few more days to enjoy Christmas dinners, which normally include glazed ham and maybe some sugar cookies.

Senior quarterback Lucas Johnson and junior wideout Jesse Matthews, on the other hand, decided they would be feasting on the football field.

Their entree of choice? The University of Texas at San Antonio’s secondary.

Johnson and Matthews had the performance of a lifetime against the Roadrunners (12-2, 7-1 Conference USA) as San Diego State (12-2, 7-1 Mountain West Conference) won the Frisco Bowl 38-24 on Tuesday night.

“It was awesome to see the offense click at such a high level,” Johnson said after the game to Goaztecs.com. “It’s easy when you got guys like Jesse Matthews out there making plays for you. My O-line was giving me a great pocket and the defense came up with stops when they needed it.”

UTSA came into the game missing a whopping 25 players for a myriad of reasons, ranging from COVID-19 to poor grades. However, two of UTSA’s better players, junior running back Sincere McCormick and redshirt senior corner Tariq Woolen, would be skipping the game to prepare for the upcoming NFL Draft.

Without their top corner, UTSA’s secondary was shredded by a quarterback who nearly lost his starting job earlier in the season. Johnson had his best game as an Aztec, throwing a career-high 333 yards and three touchdowns on 24-of-36 passing.

Matthews was his favorite target as the former walk-on snagged 11 catches for 175 yards and two touchdowns, including a majestic 20-yard score that saw Matthews dive past the pylon.

It was a game of milestones for the Aztecs, who have now won back-to-back bowl games dating back to 2019 when SDSU defeated the Central Michigan Chippewas 48-11.

Johnson was the first SDSU quarterback to toss over 300 yards since Ryan Agnew did it against Fresno State in 2019.

Meanwhile, senior running back Greg Bell capped off his SDSU career by rushing for 102 yards on 26 carries and a touchdown. Those 102 yards were just enough to push him over 1,000 yards for the season, making him the 18th running back to reach the milestone.

Speaking of running, the Roadrunners lived up to their namesake and ran the ball down SDSU’s throat even without their All-American running back. Senior backup Brenden Brady picked up the slack, carrying the rock 16 times for 76 yards and a touchdown.

It seemed like UTSA’s running game was going to be a constant thorn for the nation’s No. 2 rushing defense, especially as the Aztecs allowed the Roadrunners to score on the opening possession of the game — the first time any opponent has done that against SDSU all season.

But the Scarlet and Black knotted the game at seven on Matthew’s aforementioned leap. Both teams traded scores before Araiza’s 33-yard field goal gave SDSU a 17-14 lead at halftime.

After some tinkering of the game plan along with timely adjustments, the Aztecs shut down the Roadrunners at every stop, limiting them to just 10 points in the second half.

Even with a penchant for shooting themselves in the foot (SDSU finished the game with 14 penalties for 124 yards), it didn’t stop the Aztecs from dropping 21 points in the second half.

Who knows if or when SDSU will have another offensive explosion like this, especially with Johnson and fellow senior Jordon Brookshire graduating.

But, for at least one night, the pass attack was back on the menu.