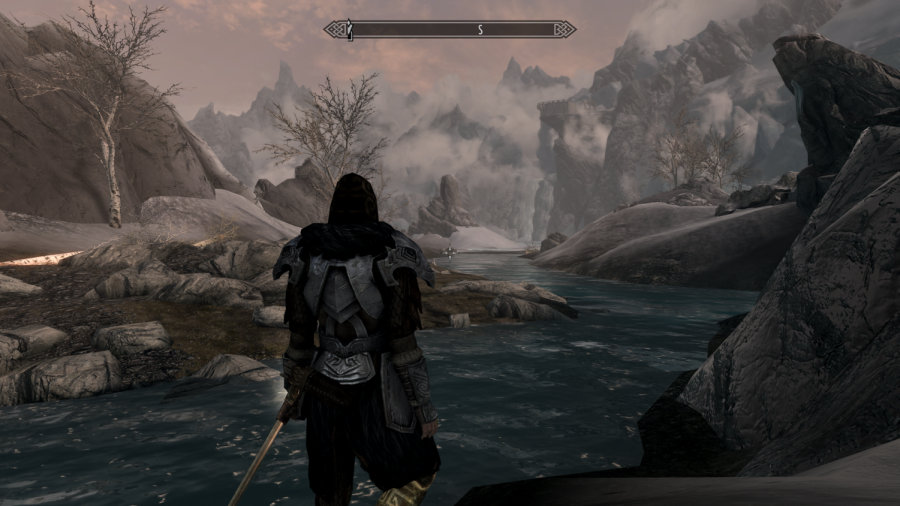 “How high the mountains of Skyrim rise.”

It’s been a decade since “The Elder Scrolls 5: Skyrim” was released and much like an adventurer with an arrow in the knee, nothing’s been the same since. Bethesda Studios’ open world role-playing game (RPG) brought home a trove of “game of the year” wins and nominations upon its initial release and was considered a major step forward for the franchise: improved graphics, streamlined gameplay, the dragon shout attacks etc. For the game’s “Anniversary Edition” (and seventh reissue); new gear, quests and fishing (!) have been added to reward (and reassure) loyal fans.

Set in the region of Skyrim; gamers play as a horse thief who barely escapes execution due to a dragon attack, something that hasn’t happened in thousands of years. This dragon isn’t any old worm though; it’s Alduin, a.k.a. The World Eater, whose presence signifies the end times. Turns out you’re the new Dragonborn (or “Dovahkiin”); a “mortal with the soul of a dragon”….and the kingdom of Tamriel’s last hope. Considering how broken the kingdom has been these last 200 years, that’s quite the title to live up to.

The songs of “Skyrim” have been sung throughout the ages; as Mark Darrah, executive producer of “Dragon Age: Inquisition”, acknowledged, “‘Skyrim’ changed the landscape for role-playing games completely.” For “The Witcher 3: Wild Hunt”, studio CD Projekt Red actively sought to one-up “Skyrim” and “The Legend of Zelda: Breath of the Wild” development team used “Skyrim” as a reference when researching open world games.

“Skyrim” is so immersive and expansive, you could be on your umpteenth playthrough and still find something/one new. The amount of mileage it has had is insane, and that’s saying nothing about the prominent modding community, who’s worked such wonders as recreating/remastering the entirety of the previous game “Oblivion” and turning every dragon into Thomas the Tank Engine characters. Yep, it’s just as terrifying as it sounds.

Jeremy Soule’s score is one of the previous decade’s most iconic; from the epic mead-hall-chant main theme to sweeping melodies that invoke tales of yore and chill mountain breezes. There’s currently no word as to whether he’ll return to score the next entry, but fingers crossed.

The game does show its age in some spots, namely the notorious “Bethesda bugs” and its melee combat isn’t as fluid compared to current games, but “Skyrim” will always remain a titan amongst giants.

“But power is inert without action and choice.”

What’s fascinating about “Skyrim”’s main conflict is how morally grey it is. The Greybeards, the wisemen who mentor you, have the power and ability to do something about the dragon crisis, but they don’t see it as their concern and they just sit in their mountaintop fortress. Meanwhile, the Blades take direct action, but while the Greybeards are hesitant and overly neutral, the Blades rush and make snap judgements (sometimes resulting in fatal consequences).

As if the return of the dragons wasn’t enough, Skyrim’s also deep into a civil war, one of the many aftereffects of the events of “Oblivion.” Again, both sides are morally grey…except for the Thalmor. EVERYONE hates the Thalmor.

For starters: the Imperial Empire doesn’t shy away from prison torture and they bend to the demands of said Thalmor, a genocidal fringe sect that nearly wiped them out (had it not been for a Faustian treaty). One such demand is the unpopular banning of the worship of Skyrim’s “hero-god” Talos. The alternative is the Stormcloak Rebellion, who’re fighting for Skyrim’s independence from Thalmor oppression. Unfortunately, they harbor explicitly racist beliefs and they could possibly be a coup in disguise considering Jarl Ulfric Stormcloak’s slaying of the High King of Skyrim…which sparked the civil war.

Regarding other storylines, the “Dawnguard” expansion pack is a vampiric quest of defiance and reconciliation while “Dragonborn” is a Lovecraftian tale about the burden of knowledge and whether some things are better left unknown.

We could get into the guild storylines and side quests, but then we’d be here all day. Ultimately, “Skyrim” is a tale of (literally) finding one’s own voice…and it’s one of the few worlds where you can solve your problems by shouting at them.

“A new hand touches the beacon!”

The yet unnamed follow-up “Elder Scrolls 6,” has reached nearly mythical levels of hype. Save for a thirty second teaser at E3 2018 and news of Bethesda’s new game engine, information has been sparse and theories have been rampant. Some speculate an entry set in Hammerfell, some say it’s High Rock, some say Bethesda’s new “Starfield” trailer told us the answer. Will ES6 fulfill fan’s prophecies or could we be witnessing “Elder Scrolls 76”? Hopefully things will “just work” out fine.