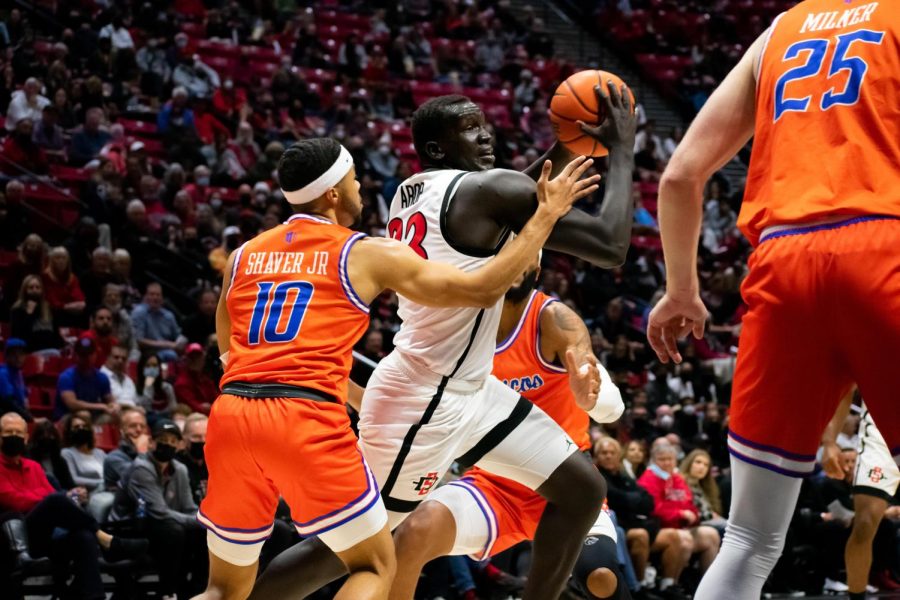 Sometimes, it takes one shot to win a game. Even if neither side can score, a single basket can be the difference between victory and defeat.

On one side, the San Diego State Aztecs. After missing two weeks due to a COVID pause, the Aztecs (10-4, 2-1 Mountain West Conference) struggled to make their shots and were out of rhythm throughout the night.

On the other, the Boise State Broncos. Winners of their past eleven games, the Broncos (15-4, 6-0 MWC) began conference play by stomping teams like Fresno State, Nevada and New Mexico.

What did both of these teams have in common? Neither could score at Viejas Arena on January 22. SDSU’s rust from two weeks off and BSU struggles against the tenacious Aztec defense turned the game into a quest of “who gets the ball last?”

With 37 seconds left on the scoreboard, Shavers Jr. heaved the go-ahead shot and… swish. After the final buzzer: Broncos 42, Aztecs 37.

“Shaver, for them, did what he did against Utah State. Game on the line, hit a step-back three. We knew where it was going, we knew what shot he was taking and to his credit and to Boise’s credit, he made it,” head coach Brian Dutcher said, after the game. “I told the team after the game, you have to have an NBA mentality… it’s hard to win a college basketball game.”

For the first five minutes of the match, it was all BSU. The Broncos raced out to a 6-0 lead while the Aztecs struggled to even get near the basket.

But it was just a six-point lead, not an insurmountable lead by all accounts.

The Aztecs weren’t shooting the lights out at Viejas Arena, but they were doing just enough to hang on.

A second-chance layup by senior forward Nathan Mensah broke the Aztec goose egg after nearly six minutes of no scoring. Junior guard Lamont Butler’s 3-point shot made the score 6-5 and, just like that, SDSU was back in the game.

Boise State would take a lead, but the Aztecs remained a thorn in their side. Shaver Jr’s 3-point shot put the Broncos ahead, just for back-to-back SDSU two-pointers to knot the game at nine.

Would redshirt junior guard Max Rice hitting a 3-pointer retake the lead? Not so fast. Insert senior guard Matt Bradley hitting a three of his own. A 5-0 BSU run was answered by a 5-0 run by SDSU, tying the game at 17. As time dwindled off the clock, senior guard Trey Pulliam hit two floating jump shots to give the Aztecs a slim 23-22 lead.

Something happened in the second half, however. SDSU went ice cold and making a basket seemed nigh impossible. A lone free throw by senior forward Aguek Arop was the only offense the Aztecs could muster against the Broncos.

BSU, on the other hand, went on a 12-0 run and seemed destined to run away with both the lead and the game.

A lapse in scoring from BSU had the Aztecs smelling blood in the water. Butler’s layup at 9:48 was the first bucket by an Aztec in the entire first half and kickstarted a 13-0 comeback.

A Shaquille O’Neal-esque dunk by Mensah nearly blew the roof off of Viejas Arena and Bradley’s ensuing jump shot put the Aztecs down by just a point at 35-34.

“Sometimes, the hardest thing to do is play through frustrations, so there is no way a college basketball team can start the way we did in the second half and not be frustrated,” Dutcher said. “To our credit, and to these young guys’ credit, they played through frustrations, they concentrate, they believe in themselves and their teammates.”

Minutes later, tied up at 37 all, SDSU had a final shot to ice the game after two free throws by the Broncos. BSU sniffed out Adam Seiko on a screenplay and the Aztecs had to adjust on the fly, leaving Bradley to take a final three.

Despite being open, the ball didn’t go into the basket. Thirty seconds later, Shavers Jr. made the game-winning bucket.

Sometimes, it just takes one bucket.