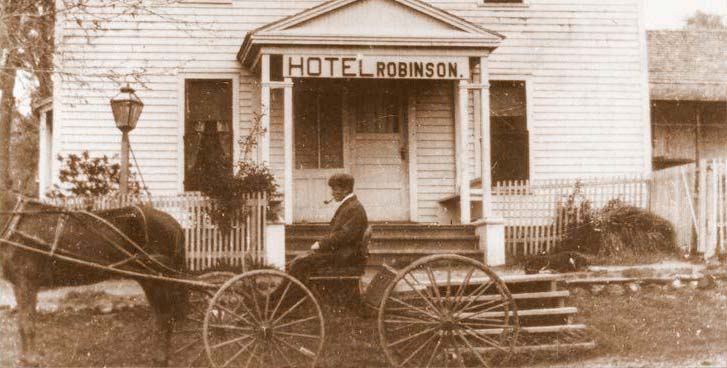 Before becoming the Julian Gold Rush Hotel, Albert Robinson's business opened as Hotel Robinson, and was immediately an important part of Julian, certifying itself as a landmark that's now been around for generations.

One way to celebrate Black History Month this February is by visiting several prominent monuments dedicated to the struggles and triumphs of African Americans in San Diego.

Julian Hotel, located 50 miles east of campus in Julian, is the oldest continuously run hotel in California. The quaint country-style hotel is also one of the first Black-owned businesses in San Diego County, which was founded by Albert Robinson and his wife Margaret Robinson in 1897. Albert Robinson was a freed slave from Missouri who moved to Julian during the California Gold Rush. According to the original hotel registers, several prominent San Diego families such as the Scripps, the Whitneys, and various senators frequented the Julian Hotel. The hotel has received the honor of being listed in the National Register of Historic Places and remains a testament of Black innovation within the San Diego community.

Located in San Diego’s Gaslamp District along the Martin Luther King Jr. promenade is the “Breaking of the Chains” monument created by Melvin Edwards. The monument, which was installed in 1995, is a chilling steel structure meant to depict the breaking of the “chains” of discrimination. A plaque located next to the monument is inscribed with a quote from Martin Luther King Jr. and reads “along the way of life, someone must have sense enough and morality enough to cut off the chain of hate.” The art piece’s centralized location means thousands of San Diego natives and tourists alike pass and reflect upon its message.

The World Beat Center, located in Balboa Park, is a nonprofit organization dedicated to promoting, presenting, and preserving the African Diaspora and Indigenous cultures of the world. The World Beat Center strives to create unity in the community through art, music, dance and other forms of expression. The building itself is brightly decorated with art created by local artists celebrating various African cultures, and the exterior is surrounded by a healing peace garden. The center holds events throughout the year, such as reggae tributes, group meditations, and art exhibits which are open to the public. The World Beat Center even has a vegan cafe where you can get delicious cultural meals such as Jamaican red curry or Louisiana Creole gumbo!

Another location of interest located in Balboa Park is the San Diego History Center. Currently, the museum has an exhibit titled “Celebrate San Diego: Black History and Heritage” on display for Black History Month. The exhibition includes both virtual and physical displays which highlight Black San Diegans who have made big contributions to the county, as well as historical civil rights cases which took place in the county. San Diego History Center also has an exhibit on the life of Nathan Harrison, a freed slave from Kentucky who came to live in a small cabin on Palomar Mountain during the California Gold Rush. These two exhibits emphasize the vibrant and long-running African American community in San Diego, while also bringing awareness to the discrimination that was and still is faced by many Black San Diegans today.

Diversity is an important element of what makes San Diego the county it is today, and the African American community is a huge part of that. It is important to celebrate the Black San Diegans who have made a difference, while also recognizing the injustice faced by African Americans both historically and in modern times.