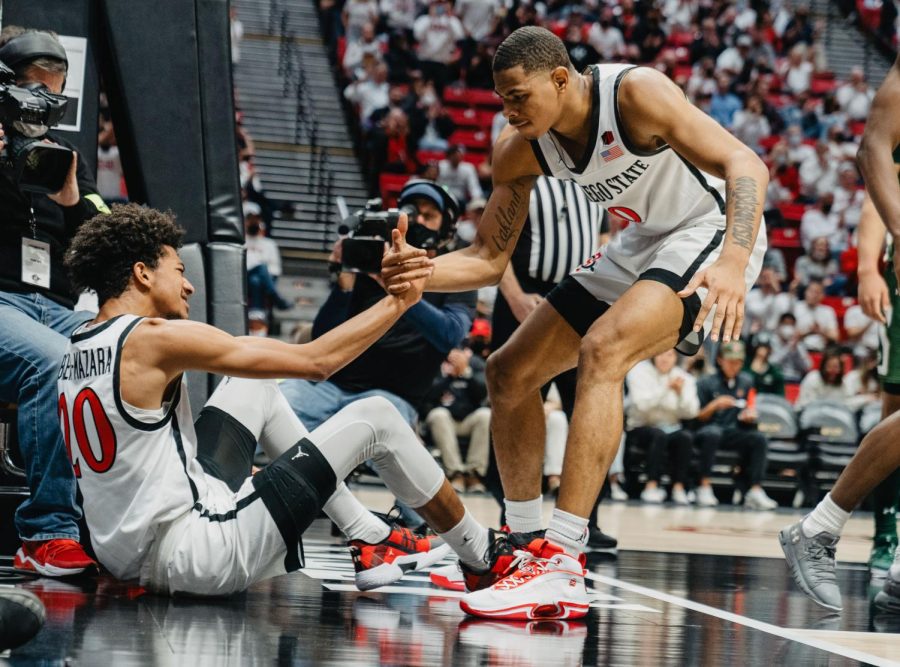 Chad Baker-Mazara (left) gets helped up to his feet by Keshad Johnson (right) during SDSU's Jan. 8 match against Colorado State.

Sophomore transfer Chad Baker-Mazara put up 20 points on 6-of-7 shooting to lead the red-hot Aztecs to a 61-44 victory at Fresno State, extending the Aztec winning streak to five on Saturday.

Baker-Mazara cashed four of the team’s season-high nine threes while the Aztecs held the Bulldogs to just 44 points, locking down Fresno State standout junior transfer Orlando Robinson. Robinson entered the game averaging 18.4 points but was held to only nine points on 3-of-10 shooting and one assist.

The Aztecs often left Robinson one-on-one, only doubling if he put his head down or lost sight of the weak-side defender. The goal was to limit his assist opportunities. Head coach Brian Dutcher’s risky strategy paid off.

“He’s such a gifted passer like (junior Matt Bradley) is,” Dutcher told the San Diego Union-Tribune postgame. “If he draws a double, he finds his teammates. We were just reading eyes. You’ve got to have a feel for the game. You’ve got to know if he’s just dribbling and looking at you, you can’t go. But when he drops his head into his move, then you’ve got to go once in a while and try to strip the ball.”

“They were running at me left and right,” Bradley told the Union-Tribune after the game. “One thing I think they counted out was my ability to pass. Like I’ve been saying all season, I think I’m an understated passer. I was finding my teammates.”

Not only did the Aztecs move to third place in the conference, but they catapulted from 35th to 23rd in the always important KenPom rankings, signaling a strong case for an at-large March Madness entry.

The road tune-up is a good test for the Aztecs as they head into Boise this Tuesday to challenge the current Mountain West leader. With a win, the Aztecs would be tied for second with three conference losses, one back of Wyoming who is set to battle fourth-place Colorado State on Wednesday. It will be an important week in the MWC with the conference tournament just a couple of weeks away.