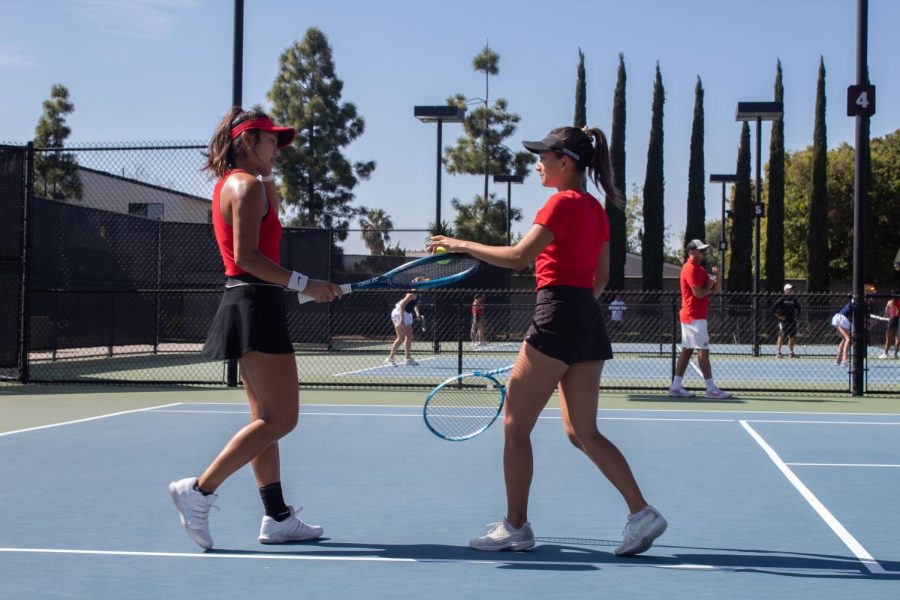 Seniors Bunyawi Thamchaiwat (left) and Tamara Arnold (right) congratulate each other after a set.

Despite the score, the Aztecs had to fight hard for this win.

SDSU got off to their usual strong start as the senior duo Bunyawi Thamchaiwat and Tamara Arnold recorded a 6-0 victory over senior Gitte Heynemans and sophomore Léa Romain. Hawai’i then tied the doubles matchup as freshman Ana Vilcek and senior Tal Talya Zandberg were 6-2 winners over the Aztec team of seniors Nnena Nadozie and Alicia Melosch.

For the third consecutive match, senior Regina Pitts — who was named Mountain West Conference Player of the Week on Feb.16 — and junior Cécile Morin would have the opportunity to win the doubles point for the Aztecs. And indeed they did as the duo defeated junior Satsuki Takamura and senior Nidhi Surapaneni 6-3.

The Aztecs then went on to win their singles matchups 4-2.

Thamchaiwat kicked it off with a ​​6-2, 6-1 win against Takamura in what would be the only singles game to end in 2 sets.

Aztecs Arnold, Nadozie, and Melosch each won their singles matchup in three sets while Pitts fell to Zandberg in her first loss of the season and junior Julia Jordan fell to Heynemans.

On Sunday the Aztecs faced their toughest matchup of the season so far: No. 7 University of California Berkeley.

Thamchaiwat and Arnold opened up the doubles matchups with another win, defeating juniors Haley Giavara and Valentina Ivanov 6-4. The win moved the duo to 6-1 on the season.

The Golden Bears then clawed back as freshman Jessica Alsola and sophomore Hannah Viller Moeller defeated senior Pitts and junior Morin 6-4 to tie the doubles point.

The point came down to Aztec seniors Nadozie and Melosch who fought Erin Richardson and Julia Rosenqvist with all they had before narrowly losing in a 7-6 (7) decision. The doubles point belonged to the Golden Bears.

In singles, Pitts would draw the Aztecs level after defeating senior Julia Rosenqvist, 6-1, 6-1 before the Golden Bears went on to win the next three singles matches to clinch the victory.

Despite losing the match, the highlight of the day was the highly competitive matchup between Thamchaiwat and Giavara who ranked No. 27 in singles in 2021. The match, which went on for much longer than expected, ended 6-1, 5-7, 11-9 with a large crowd of supporters in attendance. The win moved Thamchaiwat to 7-0 in singles this season.

“This was a good test for her and I was very proud of the fact that she was able to come on top even though the team match had been decided,” said head coach Peter Materra. “They both played great matches, her and Giavara, could’ve sold tickets to that one.”

Even with the varied results, the Aztecs Tennis Center was loud all weekend whether it was the players or the fans.

Mattera has been recently talking to his team about using their voices to improve their results on their court.

“They did a really good job today of using their voices, we talked about it after the Hawai’i match that they need to hear each other out here because the amount of emotional energy that provides to the group is significant,” Mattera said. “We got to watch a great example of that on this court with Bunyawi using her voice almost entirely for good and to pump herself up. With some of the teams in the rest of our schedule the rest of the way that’s what it’s gonna take, it’s an emotional battle out there and the team that believes they’re gonna win is gonna win and the team that stays together is probably gonna win too.”

The Aztecs will take a short break but are back in action against the University of San Diego, Wednesday, March 2, at 1:30 p.m. PT.