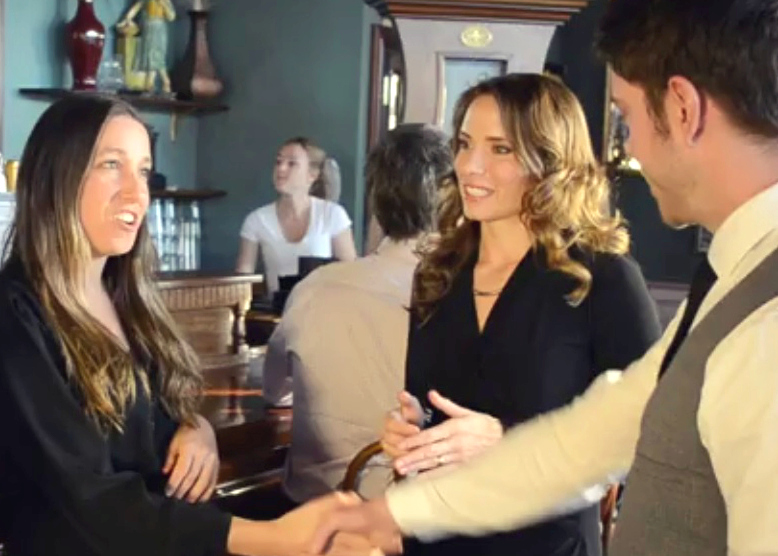 The season of love has forever changed thanks to the COVID-19 pandemic.

These San Diego-based love experts tell us why.

Doctor Dana McNeil has committed herself to providing what she calls a cozy environment for the couples she sees in therapy sessions.

Katy Clark shares her expertise as a matchmaker with a network of almost 11 thousand Instagram followers, on a daily basis.

Sherri Murphy met her husband through a dating service 28 years ago, according to her daughter Tammi Pickle. Now, Murphy and Pickle run their own matchmaking agency, Elite Connections.

McNeil treats a variety of couples at her San Diego-based practice, The Relationship Place. She encourages individuals in same-sex , polygamous, and kinky relationships, along with any and all ethnicities, to stop by. As she’s worked throughout the pandemic, she has noticed a buildup of relationship strain caused by couples not having the chance to miss each other.

Couples in San Diego specifically, face some unique issues that she’s seen in The Relationship Place.

“All of our social outlets often had something to do with being outside or connecting with people,” McNeil said, “You know, those rituals of connection that we have that were a big part of the culture of San Diego we weren’t able to do.”

McNeil said younger couples are usually more willing to work on their relationship through therapy sessions, while older couples often battle stigma for going to therapy.

Clark, on the other hand, works for the invitation-only matchmaking service, Cinqe. As a single mother of three, with a divorce looming behind her, Clark made it a point to pursue her passions.

These passions included moving to China, and opening a restaurant there to cater to Western tastes. She later found herself on the seventh season of Food Network Star. She also pursues fitness and fashion. Clark said all of these endeavors now help her with her career as a matchmaker.

Clark came onto Cinqe’s radar when she used the service. She said she felt safe using the service because Cinqe pre-screens all its clients. One of the people she was matched with about eight years ago, is now her own client.

Clark said dating has absolutely been impacted by COVID-19, especially in California.

As part of the current pre-screening, Cinqe matchmakers find out what their clients believe as far as COVID-19 vaccination.

April Davis is the chief executive officer of Luxury Matchmaking (LUMA). According to Davis, LUMA is an exclusive upscale boutique firm that works one-on-one with busy professionals and executives who are seeking a long-term exclusive relationship.

LUMA works with 15 employees and a five-step process. First the matchmakers meet with their clients to get to know them and their goals, then about 50 potential matches are screened, coaching and feedback is the third step. The fourth step is to plan a date, and the fifth is to receive feedback and an evaluation.

“We typically work with professionals, executives, and business owners ages 25-70,” Davis said “We typically don’t work with college students since there is an investment to become a client.”

According to Davis, the COVID-19 pandemic has made people have to be more creative and intentional in making connections.

“They’ve had to learn how to use technology, look good on a video call, and keep the connection moving forward,” Davis said, “We’ve provided our clients with many tips and even have practiced with them on how to do a video date to ensure success.”

Pickle and her mother host an array of 30 matchmakers at their agency. Their client demographic ranges from 20 to 70, Pickle said.

According to Pickle, Elite Connections has been in business for 27 years, with thousands of clients in the database and an 86% success rate. They meet their clients, get to know them, and set them up with pre-screened matches.

They’ve been busier than ever since the start of the pandemic.

“People were in a social and dating rut because of the pandemic. They reach out to us because they are serious about finding quality screen matches that are looking for serious relationships,” Pickle said.

Pickle grew up in the matchmaking business and agrees with the sentiment that pushed her mom to start the business.

“Don’t leave the most important thing in your life up to chance,” Pickle said.

“We have bi-annual events where our clients come out and mingle while raising money for a great cause,” Pickle said.

Their last event was before the pandemic hit.

McNeil is an SDSU alumna, who majored in Musical Theater. After leaving SDSU, she became a property damage claims adjuster. This meant she’d show up in places that had been ravaged by catastrophic storms, inspect the damage and then tell those affected what options they had to fix it.

McNeil often found herself staring at faces full of trauma and realized she had a passion for helping the people in those situations.

McNeil utilizes scientific studies from the Gottman Method to help her clients, which means she takes a research-approved approach to couple’s therapy. According to McNeil, The Gottman Method was created by Doctors John Gotmman and Julie Gotmman.

McNeil said a lot of therapists are very impersonal, which doesn’t encourage people to talk because there is no sense of trust built between the therapist and their client.

The first thing The Relationship Place does is find out which clinician is right for the client. At the practice, there are 10 clinicians.

“One speaks Farsi, I have one that speaks Spanish,” McNeil said, “I have one from Afghanistan, I have every color of the rainbow and every personality that you can meet.”

McNeil said each of her clinicians has a different therapeutic style, personality, and even age to work with her clients’ needs. They treat couples who are homosexual, polygamous, consensual non-monogamy, etc.

The design of the space is also important to McNeil’s approach.

“And then you come in and we have these warm hardwood floors and lots of light and music and it smells like vanilla and we get you water and chocolate,” McNeil said, “And then you just come down, no bright overhead fluorescent lights hurting your eyes. You have soft table lamps and fluffy couches.”

McNeil said since it’s already “scary enough” to go to therapy, particularly couples therapy, she tries to make it feel as soothing as possible. Her practice has also developed a program called Therapy Getaway.

Therapy Getaway encourages couples from the U.S. to come spend a weekend with their clinicians and do some intensive work to either get a relationship started with helpful tools or for couples who are experiencing crisis and are close to divorcing to get some help.

“We try to create that experience that you actually look forward to versus dread it.”

In San Diego, there are more women who make it their job to guide people towards love.

McNeil focuses on couples therapy while Clark and Pickle focus on the matchmaking process, but all three find their jobs rewarding.

McNeil said getting people to be vulnerable with her is a gift, and she’s lucky to be able to do what she does.

Davis thinks her role as a matchmaker is one of the most rewarding out there.

“Humans are social creatures and we’re meant to be together,” Davis said. “By fulfilling that for people, we’re truly enhancing their quality of life and literally creating families, which is one of the most important things in life.”

Clark said she loves her job too. She said not everyone has the same expectations, needs or desires in a relationship and there is no one way to experience dating.

One of her clients is a 52-year-old man who was reluctant to get styled. They ended up spending nine thousand dollars on clothing, which Clark said is definitely not necessary for the average client, however for that client it made a world of difference.

Clark said the same client will often give her accolades and thank her for helping him pick out a cologne, or for setting up professional photos for him since it shows the effort he puts into himself.

“It’s like having a little sister in your corner that you can trust because I want you to succeed,” Clark said, “When you succeed, I succeed.”

Pickle said it means everything to her when she can make a “nice match” for someone and they reach out to her excited and grateful.

The matchmaking service “Clinqe” was previously misspelled as “Clinque” in an earlier version of this article. The Daily Aztec regrets this mistake.