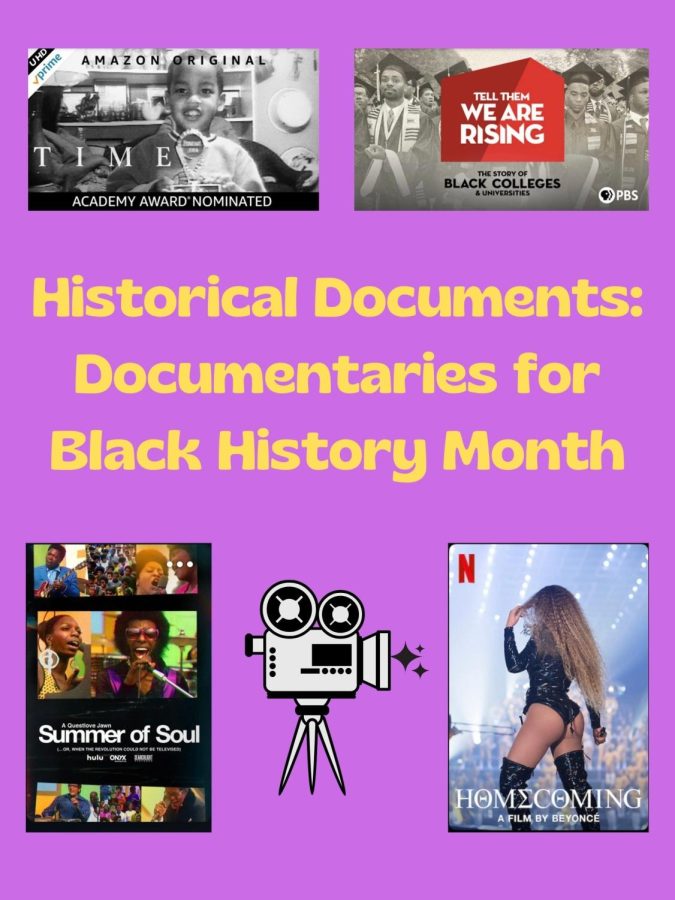 There are several lauded documentaries which summarize various elements of the Black experience, and are created by Black filmmakers. Recent culture shifting music documentaries include "Homecoming" and "Summer of Soul" but older docs such as "Black Is...Black Ain't" still hold just as much cultural relevance in modern times.

Entrepreneur, orator and self-described abolitionist Sibil Fox Richardson (a.k.a. Fox Rich) has been working to free her husband from a 60-year armed robbery sentence all while raising their children and uplifting others. After 20 long years of fighting, will this finally be their year? Splicing current footage of Richardson’s life (at her car dealership, speaking at Tulane University) with her home videos, Garrett Bradley gives viewers an intimate portrait of carceral injustice, endless love and a woman “determined to try.”

(On Amazon Prime and the Criterion Channel/Criterion Collection)

Even Beychella wasn’t built in a day! This landmark concert film/documentary chronicles the lead up to Beyoncé’s legendary 2018 Coachella headliner performance, which made her the first Black woman to open the festival, as well as the elbow grease it took for Mrs. Carter herself to execute her grand vision (“Until I see some of my notes applied, it doesn’t make sense for me to make more.”). A loving ode to HBCU culture and Black female empowerment that contains more iconic moments than can be fit here (“Suck. On. My. BAAAALLS!”), prepare to witness Beyoncé redefine the concept of a cultural reset. Flawless indeed!

“Summer of Soul (…Or, When the Revolution Could Not Be Televised)” (dir. Ahmir “Questlove” Thompson)

Here’s to 1969; the year that gave us one of the greatest music festivals in history…and Woodstock. The Harlem Cultural Festival lives again through Questlove’s stunning Oscar nominated(!) doc; weaving recently rediscovered festival footage and interviews with performers and attendees to reclaim a moment of Black musical history and celebrate the unity, catharsis and joy of music and communal pride. From Nina Simone, Sly and the Family Stone, David Ruffin to Mahalia Jackson, be prepared to be taken higher (higher!).

(On Hulu, available to rent on Amazon)

Take a journey through the history of America’s Black press through the words of the various journalists, cartoonists and photographers who paved the way, including Robert S. Abbott‘s culture shifting “Chicago Defender,” J.A. Rogers and Samuel Milai promoting Black history through the Pittsburgh Courier’s “Your History” column and Vera Jackson’s photography of the Black community for the “California Eagle.” Because sometimes it’s the legends that do the printing.

“Tell Them We Are Rising: The Story of Black Colleges and Universities” (dir. Stanley Nelson, Marco Williams)

Just finished “Homecoming” and are hungry for more HBCU brilliance? This doc digs into the rich history and impact of the many Historically Black Colleges and Universities across the nation: Howard University’s law school gave us Thurgood Marshall, Southern University gave us The Human Jukebox and The Fabulous Dancing Dolls and many of the civil rights era sit-ins were sparked by HBCU students! More than just havens of higher education, Stanley Nelson presents HBCUs as the vibrant public forums, safe spaces and realms of prosperity that they are; ones that deserve proper preservation and elevation.

(On Kanopy and available to rent Amazon)

*CW: depictions and discussions of complications from AIDS*

How is Blackness defined? What determines Blackness and its depictions? How was the term “Black” and “African American” redefined and reclaimed? Hear from a myriad of voices: everyday people, activists (Angela Davis, bell hooks, Cornel West, Essex Hemphill, etc.) and Marlon Riggs himself as they tackle and address aspects ranging from Black masculinity, Black feminism, the role of religion, Black LGBTQ+ identity, Black social class and colorism amongst other topics, all told with Riggs’ signature artistry and precision.