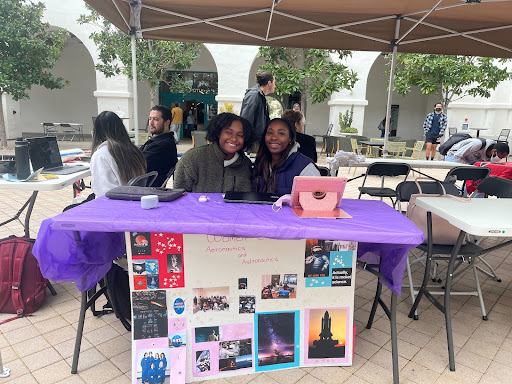 From left to right; Serenity Richardson and Kaylin Borders from WOAA.

Under the light pitter-patter of President Day rainfall, multiple student organizations gathered under tents in the Aztec Student Union.

The College of Engineering Student Council (CESC) hosted a club fair to welcome old and new members of their student organizations. CESC is holding events all week, with the club fair being the first.

Kaylin Borders and Serenity Richardson were in attendance, as the founders of Women in Aeronautics and Astronautics (WOAA) at SDSU.

Borders is a fourth year aerospace engineering major, while Richardson is a third year majoring in environmental engineering.

Borders has also interned in the U.S. Naval Research Laboratory in the spacecraft engineering department, and is doing research in the computational, guidance and navigation lab at SDSU.

According to Borders, WOAA is a national organization that promotes women and inclusivity in the aerospace world.

Three years ago, Border decided to start up a WOAA community on campus, with the cofounder.

“We thought why not start a chapter here at state to help promote an inclusive environment,” Border said.

Richardson said she wants to target freshmen, who may not know there is a club on campus which promotes inclusivity in the aerospace world on campus.

“We’ve even told people several times, you don’t even necessarily have to have a huge interest in the aerospace,” Richardson said, “That’s why we have different types of majors. Obviously, I’m an environmental major now. You don’t have to have any experience, you can just come network, get to know people and understand that this is really about creating a community.”

Border said attendance at meetings and events has been better since being on campus, which is also true for another group at the club fair.

Roberto Montano Ramirez is a third year electrical engineering major and a part of Sigma Phi Delta. He’s been a part of the group since his freshman year, and experienced the club during the quarantine period of COVID-19.

Ramirez said Sigma Phi Delta is a tight group of guys. He said he wanted to join when he was invited to a tabling event pre-COVID.

“The way we really cultivate this brotherhood comes down to staying connected to one another.” Ramirez said. “The things we learn, especially the workshops, doing things together, doing tasks together as a group has really cultivated us as brother (hood).”

Ramirez said he loves seeing people smile and is excited to bring more brothers in. He also shared he plans to run for the executive board next semester to continue encouraging more brothers to come in.

Ramirez said the club fair was a slower day for recruitment but that members still showed up.

Therese Dela Rosa and Esteban Carrera serve as president and vice president of ACOSE which is the Aztec Council of Systems Engineering.

Rosa is a third year aerospace engineer, while Carrera is a senior.

According to Carrera, systems engineering is a subdiscipline of engineering which teaches students how to manage a team, project or company within the engineering disciplines. He said it forces someone to think of the logistics behind designing and making a product.

“Basically what we’re trying to do as a club is get students certified in systems engineering, those who are interested,” Carrera said.

He said they do a lot of networking events with professionals from companies like Northrop, and General Atomics among others, and that ACOSE is sponsored by the San Diego Chapter of System Engineers.

Carrera said that students from any major can join the organization.

ACOSE started up last semester according to Rosa who also shared she was excited about seeing people in person.

Carrera said he felt like people are interested in joining ACOSE in part because they’ve missed being social during the pandemic, but also do not want to join “bigger social clubs” like those within Greek Life.

They encourage both current students and alumni.

Another group in attendance at the fair was the American Society of Civil Engineers at State.

Alana Bentigue and Alex Fuller said they were there to promote, network and inform about an annual conference they are having at UCSD soon.

Bentigue is a third year civil engineering major and has been part of the group since her first year.

She said they look for engineers to be a part of their technical and sports teams, as they often have sporting events for the club members.

Fuller is a fourth year civil engineering major and part of the group for six months. He said he has made a lot of friends and had a lot of fun.

“Even at our general body meetings, it is really easy to get a foot in the professional world,” Bentigue said.

She also shared she has gotten leadership and internship opportunities while in the group.

“It is also just a great way to know people at school,” Bentigue said. “Finding study buddies and honestly just a great group of friends to have a support system.”