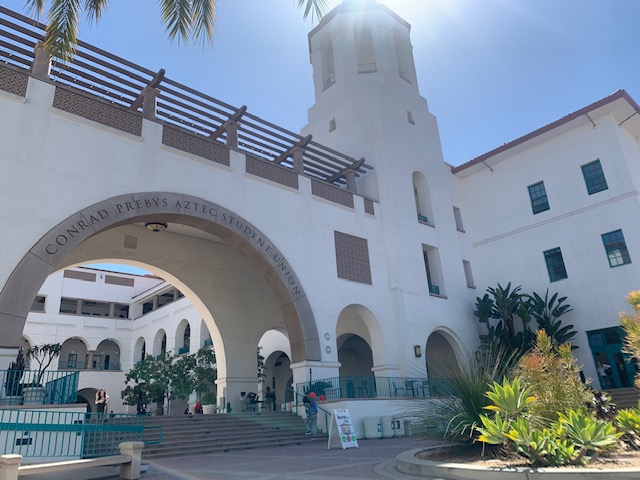 Part of SDSU's budget was allocated to the newly designed logo.

“It’s putting lipstick on a pig is what it is,” Biology Professor and Chair Scott Kelley said, regarding his opinions on San Diego State spending in the last academic year.

Debates over university budget allocation, changing COVID-19 mandates and more were discussed at the university senate meeting on April 5.

During the last fiscal year, SDSU was budgeted to collect an additional $180.7 million from net student tuition and fees and $67.7 million from revenue-based fees (including the Student Success fee), according to the university’s 2019-2020 Budget Book. Net student tuition and revenue-based fees made up more than half of the university’s total Operational Fund budget of  $475.3 million during the 2019-2020 fiscal year.

Kelley chimed in with this metaphor after Academic Coordinator Amanda Fuller gave an update on the university senate budget request of an additional $42,000 to support the operational budget needs of the University Senate.

The University Senate is expected to have closer to $60,000 in unspent funds from the current fiscal year 2021-2022. So, it was discussed that these carry-forward savings can instead be used to cover the $42,000 requested for the 2022-2023 fiscal year, according to SDSU.

“I would like to clarify that as the Senate has enough carry forward savings from the last two years of low COVID spending (e.g. no in-person meetings, no travel), we agreed to use carry forward to cover next year with the understanding that we expect the additional funding to be approved in next year’s cycle,” Fuller said, in the Zoom chat of the senate meeting. “I’d also like to add that Agnes invited us to apply for any one-time funds needed in the spring if we run into any issues during AY 22-23. We will be fine for next year, but moving forward the gap will be problematic.”

Student leaders expressed their opinions on the budget being a point of contention.

“It’s really important that we’re looking through a very critical lens and that every expense that’s either on students or that is utilized by university spending is very thought out,” A.S. President Ashley Tejada said.

At the meeting, Kelley expressed disbelief that money was allocated for large on-campus celebrations and $300,000 was spent for university branding/marketing while many buildings, including the library, continue to have leaky roofs and require maintenance.

“Our buildings are not the places you want to see on your SDSU tour,” Kelley said.

In December 2021, the President’s Budget Advisory Committee (PBAC) recommended, and President de la Torre approved, a $300,000 budget allocation for a national marketing and brand initiative and support for the university’s year-long 125th anniversary celebration. University representatives said this allocation supports far more than a logo and color usage, including a research initiative, the development and launch of a new university tagline, and more.

The University Senate can also directly make budget allocation requests for their operations, according to SDSU.

Vice President of Business and Financial Affairs Agnes Wong Nickerson responded to Kelley’s criticism saying maintenance facilities didn’t have funding for the last two years and have had to rely on the state for academic and administration building maintenance.

“I think focusing on only the library or facilities may be missing the broader point Senator Kelly raised about how resources and funding are being prioritized by leaders at SDSU…” Anthropology Professor Savanna Schuermann said, in the Zoom chat of the meeting.

For more information on the past year’s budget, visit this SDSU University Facts page.