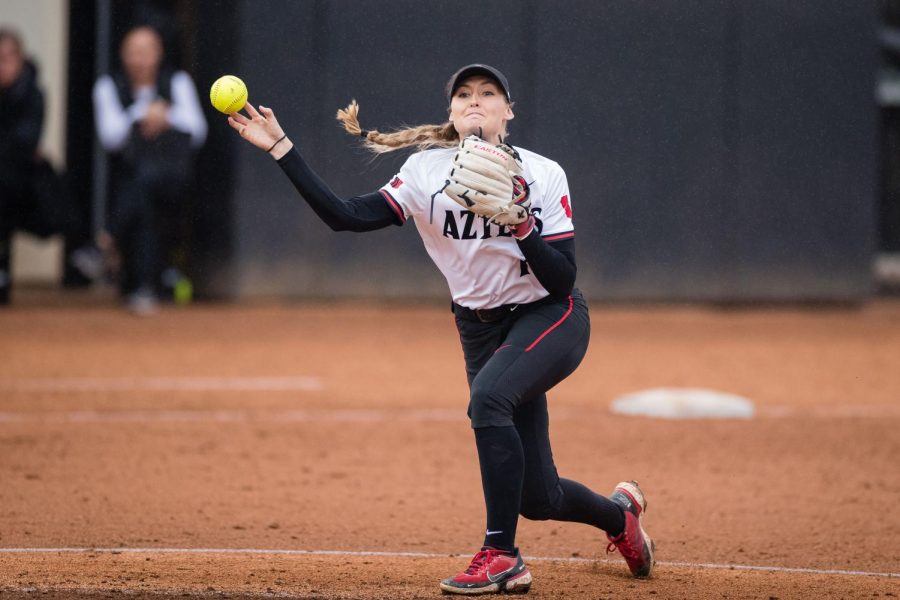 The Aztecs got their first conference loss to UNLV, but ended up winning the series, and are now ranked 24th in the country.

UNLV senior pitcher Jenny Bressler kept the Aztecs’ offense at bay in the first two innings with three up, three down in the first and left two runners stranded in the second.

The Aztecs caught wind in the third inning when senior Nicole Siess drew a walk and was able to advance all the way to third on a bunt by freshman Bella Espinoza. Sophomore Mac Barbra — who led SDSU’s offense with three hits and two RBI’s — brought Siess home with a single to left field, giving the Scarlet and Black a 1-0 lead in the third.

It was a tight-knit, one-run game with Balint giving the Rebels no wiggle room to work. The Aztecs’ second score came in the seventh inning when Espinoza singled to left field and advanced to second off an infield error. Barbra was able to collect her second RBI with a single to left bringing Espinoza home and advancing the Aztecs to a 2-0 lead.

Balint retired the Rebels the next two innings to close out the victory. The Rebels offense was dormant the whole game against Balint going 0-12 with runners on and 0-10 with runners in scoring position.

A six run rally in the sixth inning was not enough to put the Aztecs on top in this intense match against UNLV.

It was a slow start for the Scarlet and Black the first four innings with junior pitcher Alanna Thiede retiring twelve batters for UNLV.

The Rebel offense came out hot against sophomore pitcher Allie Light, scoring four runs in the first inning. Junior Dani Martinez came into the game to relieve Light and finish out the first inning, holding the Rebels at four.

The first hit of the game for the Aztecs didn’t come until the fifth inning off a base hit from senior Jessica Cordola. Sophomore Makena Brocki also got a base hit, leading to an infield error from the Rebels that allowed Cordola to round third and score the first run of the game for SDSU. In the bottom of the fifth, UNLV landed three runs and a two-run home run by freshman Ariana Martinez that ultimately set up SDSU’s dominant sixth inning.

The Scarlet and Black entered the sixth inning of the game trailing 8-1 but got some wind in their sails when sophomore Macey Keester got hit by a pitch. Following Keesters’ at bat, SDSU’s offense was unstoppable getting contributions from Barabra, Celis, Espinoza, Schultz and Romanello. Collecting eight hits and six runs, the Aztecs closed in on the Rebels and ended the inning trailing by only one run.

Nine different players got into the hit column for San Diego State as they out-hit the Rebels 9-8. However, the Aztecs couldn’t pull off the victory ending their 12-game win streak.

A 7-6 victory for the Aztecs captured this weekend’s series against UNLV but it didn’t come without a fight. Eleven long innings of softball were played on Sunday in this neck-and-neck match.

Both teams were offensively dormant in the first inning courtesy of power house pitching from Aztec Balint and Rebel senior Jenny Bressler.

SDSU was able to pull ahead in the second inning starting with an RBI single from freshman AJ Murphy, a double from senior Taylor Adams, and a sacrifice fly by Espinoza. In the sixth inning off a base hit, Murphy collected an RBI and Celis brought home Siess with an RBI in the seventh.

Senior April Vissor from UNLV stirred up trouble for the Aztecs with a two-run homer in the fifth inning against Balint, and a three run home run in the bottom of the seventh inning to tie the game as the Aztecs appeared to be sailing smoothly into a victory.

Neither team would be an offensive threat again until the eleventh inning when  Keester and Espinoza had back-to-back singles which put two runners on with one in scoring position. Celis was able to draw a walk by Bressler loading the bases. Schultz smacked a hit to left field and brought two runners home giving the Scarlet and Black a 7-5 lead.

The Rebels were ready to battle in the bottom of the eleventh and loaded the bases with a single, an error and a hit batter. Freshman relief pitcher Dee Dee Hernandez was able to strike out Visser — whose bat was carrying UNLV’s offense — for the second out of the inning. An infield single by the Rebels allowed the score to advance to 7-6 but a weak pop up by senior Mia Trejo was caught by Murphy to end the game.