It’s my money and I need it now! We need to abolish unpaid internships 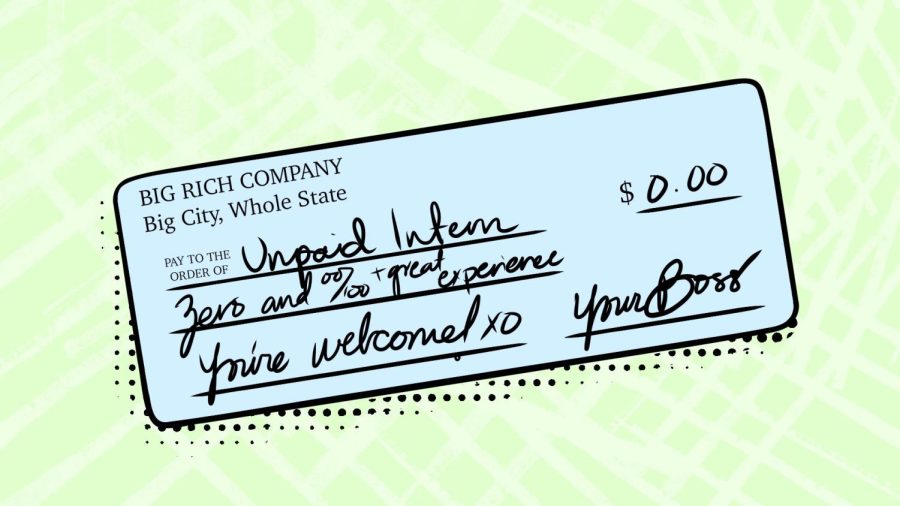 The U.S. job market has never been more competitive, according to a Forbes report in 2021.

As graduates enter the workforce, 90% of employers expect students to have internship experience, which serves as a method of talent acquisition and networking. According to the American Prospect, this skill enhanced resumes by 60%.

The ability to work as an intern, let alone a paid one, is of rarity and privilege. The scarce market for internships highlights this with only a third of graduates having participated in one, according to Forbes. When we examine the effect internship acquisition has on post-graduate success, the ethicality of unpaid internships must be reexamined as one that perpetuates classism, sexism and racism. The rarity of unpaid internships eventually leads to a workplace that is non-inclusive.

For many students, working an unpaid internship is a privilege of wealth and race. To students that already struggle with loans, rent and tuition fees, it is a burden. Most lower and middle class students cannot leave their minimum wage job to work for free. This obstacle becomes apparent when we consider how household income is linked to racial inequities, and how unpaid internships may affect students of color.

According to the 2019 U.S. census, Black and Hispanic communities were overrepresented in national poverty rates. Students within these demographics are shown to face economic and racial obstacles in acquiring internships with pay, if any at all.

San Diego State undergraduate Ashley George faced hardships in searching for a paid internship. She echoed the concerns of many students who rely on financial aid for survival.

“As someone that lives off student loans, I can’t afford to quit my job and work an unpaid internship,” George said. “But at the same time, I feel like my resume and career path are suffering because of my financial standing.”

Proponents of unpaid internships argue that the experience and mentorship offered substitute for formal education. While mentorship does hold value, these experiences do not suffice for the financial stability of a paying job. Furthermore, students of varying economic, racial and ethnic backgrounds offer new and diverse ideas. Their lack of opportunity represents a broader scope of insufficient representation in professional workforces. Unpaid internships do not mutually benefit students and ultimately discriminate against those that do not have an affluent white background.

Unpaid internships also have a long term economic consequence as they reinforce the racial wealth and gender pay gap. A 2016 NACE study found that unpaid internships targeted racially diverse and female dominated majors like journalism, fashion merchandising and human development. Whereas fields dominated by white male students like computer science, business and engineering often had paid internships. This discrepancy can be combated by banning unpaid jobs, which foster environments for classism, sexism and racism.

Despite their legality, unpaid internships are a form of labor exploitation today. Their existence and encouragement in higher education only promote structures of discrimination which eventually creep into professional workforces. Through legislation and class consciousness, corporations and universities must work to ban unpaid internships and offer paid internship resources to disadvantaged students.