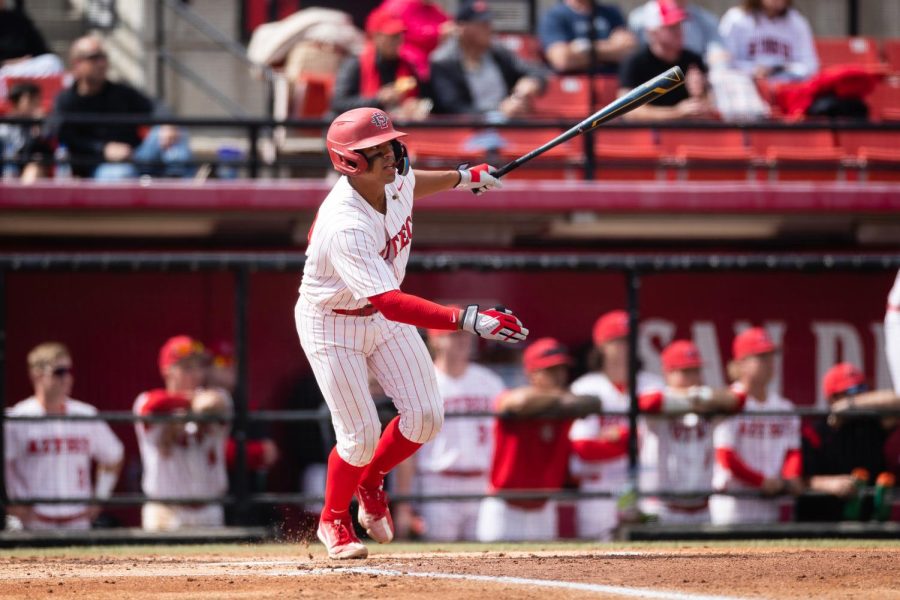 Poncho Ruiz and the Aztecs secured their first Mountain West Conference series win of the season with a sweep against New Mexico. The road sweep was SDSU's first sweep in Albuquerque si9nce 1990.

After the Aztecs dropped their midweek matchup to USD 8-3, they geared up and hit the road to take on New Mexico in Albuquerque for a weekend conference series picking up their first series win in a sweep against the Lobos — their first sweep in Albuquerque since 1990.

Junior right-handed pitcher  Troy Melton took the mound for the first of three in the clash with conference opponent New Mexico and did so successfully, leading the Aztecs to a 10-3 victory.

The Aztecs continued their scoring into the third, plating two more runs and increasing their lead to 4-0.

New Mexico made it on the board in the third after a Lobo raced home on a sacrifice fly.

The Aztecs gave themselves some insurance in the fourth after redshirt-freshman Shaun Montoya’s single plated pinch runner sophomore Max Foxcroft. Sophomore Caden Miller then made it home on a sacrifice fly from sophomore Cole Carrigg, taking the score to 6-1.

The Lobos added an additional run in the fourth as they attempted to inch closer to the Aztecs but SDSU quickly shut it down in the top of the sixth after a leadoff double from redshirt-freshman Tino Bethancourt — who later scored on a single from Montoya — and  Pancho Ruiz’s fourth homer of the year which brought in two runs.

Both the Aztecs and Lobos added one additional run in the eighth and ninth respectively but SDSU’s early lead was too much for the Lobos to come back from.

Similar to game one of the series, the Scarlet and Black started their scoring early with four runs in the first inning after a double from Leonhardt and RBI singles from both Carrigg and freshman Irvin Weems.

The Lobos then responded with a solo home run in the bottom of the first.

Both the Aztecs and Lobos tacked on an additional run in the second, taking the score to 5-2.

The Aztecs added on another two runs in the third while the Lobos plated three.

SDSU continued their scoring efforts in the fourth with a sacrifice fly from Leonhardt.

The Lobos were not quick to give up the fight, adding another three in the fourth after a sac fly and a two-run homer.

SDSU tacked on one in the sixth after Ruiz scored on a single from Carrigg, taking back their lead at 9-8.

The Aztecs bats erupted in the seventh with five runs following a single from Deron Johnson who was then advanced to second on a fielding error by New Mexico, putting Bethancourt on first base.

Montoya then brought Johnson home after a single and Carrigg singled to plate Bethancourt and Montoya. A throwing error brought Carrigg and Ruiz home following a single from freshman Irvin Weems.

New Mexico responded with two runs in the seventh and eighth and one in the ninth, coming up just short of the Aztecs in the 14-13 nail-biter.

After securing the series win, the Aztecs headed into Saturday’s matchup looking for a sweep with freshman RHP Chris Canada getting the Saturday morning start.

The Aztecs came out hot scoring four runs in the top of the first and took an early lead over the Lobos.

New Mexico wouldn’t respond until the bottom of the second with a solo home run, shifting the score to 4-1.

SDSU’s offense exploded in the top of the third after sending nine players to the plate to produce five runs after back-to-back doubles from freshman Evan Sipe and redshirt-freshman Alex Rodriguez.

The Lobos brought the score to 9-8, erasing the large deficit the Aztecs had created.

The Aztecs knocked in two more runs in the top of the eighth to secure their 11-8 victory and secure the sweep over the Lobos of New Mexico. New Mexico wouldn’t have a chance to add runs due to  the game being called in the eighth due to time constraints for the Aztecs traveling back to San Diego.

The Aztecs will take on USD in the second contest of the season, before traveling to La Jolla to take on UCSD.

Following the matchup with UCSD, SDSU will return home to start a four-game homestand on Thursday and Friday against Grand Canyon University and Saturday and Sunday against Stanford.