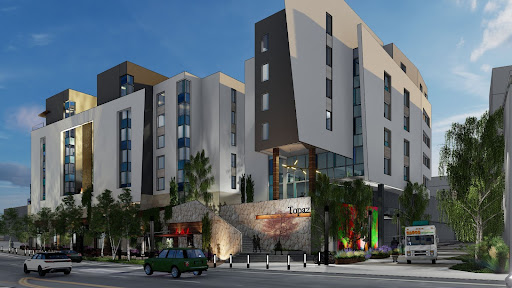 The construction taking place where the McDonalds previously resided is for a new set of college apartments called Topaz. The apartments will have a McDonalds attached to the structure.

A new apartment building named Topaz is under construction between Epic Wings and the Alpha Chi Omega house on Montezuma road.

Topaz will be opening to students in fall of 2023 and will consist of 169 student housing beds in 53 units. The budget for the Topaz is $48 million, and it will also feature ground-level retail similar to South Campus Plaza.

“The building will house approximately 11,000 square feet of retail space, including relocation of the original McDonald’s restaurant which has secured a 35-year lease,” according to a press release from Berkman Strategic Communications.

Mcdonald’s will be returning back to its original spot on an end cap next to the Alpha Chi Omega house, while the other three retail tenants have yet to be announced.

Pierce Education Properties will be managing Topaz. Fred Pierce, President and CEO and former President of SDSU Alumni said it will be a unique housing option for students.

“Topaz will have cutting-edge architecture, it’s walking distance to campus and it has all the amenities you could want to have,” Pierce said.

Topaz is set to be around the same height as the buildings at South Campus Plaza and pre-leasing is set to open in September of this year.

Many students at San Diego State were sad to see Banh Mi Babe, McDonald’s, a vintage store and a sushi place being torn down as some had been staples of campus for decades.

Marketing senior Nick Cullen said he is excited to see new retail businesses near campus, but McDonald’s taking a leave of absence from SDSU was something he was not in favor of.

“Taking away the Mcdonald’s was a low blow, but hearing that an alumnus is leading the charge is promising,” Cullen said.

Pierce’s motivations to build student housing at SDSU come from his past as a student.

“I feel like I have a duty to give back and give forward,” Pierce said. “The mission of my company is to have state-of-the-art housing, the nicest housing we can have, but at rates that are affordable to students.”