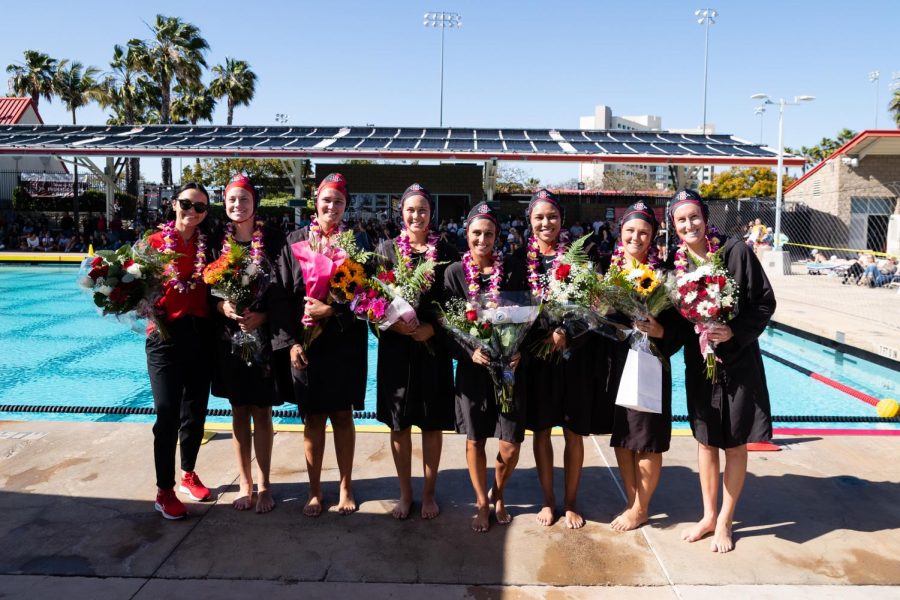 Seniors on the SDSU Water Polo Team pose for a group photo before their Senior Day match against UCSD. (Photo Courtesy of SDSU Athletics)

Both SDSU and UCSD traded early saves to start the game before Canale found the back of the net with a perfectly placed floater over the UCSD goalie with 5:30 remaining in the quarter to get the scoring going. However, the Tritons would close the quarter with two straight goals to give them a 2-1 lead heading into the second quarter.

Canale scored two more goals in the second quarter to earn a hat trick in her last game at home, however after a last-second goal by UCSD, the Aztecs headed into the half trailing 6-3.

UCSD came out of the half strong, scoring the first two goals of the third quarter before freshman Rose Kanemy’s shot slipped by the UCSD goalie to bring the score to 8-4. Both teams traded two goals apiece to close the quarter, including goals by both junior Katie Ratcliff and senior Jessica Leckich, however the Aztecs entered the final period trailing by a score of 10-6.

In the fourth quarter, Ratcliff and Samuel each added a goal of their own, however the Tritons scored three to put the game out of reach before draining the clock and securing the 13-8 victory over SDSU.

While this game concludes the Aztec home schedule, they will travel to Riverside to face off against Azusa Pacific in the Golden Coast Conference quarterfinals Friday, April 22.