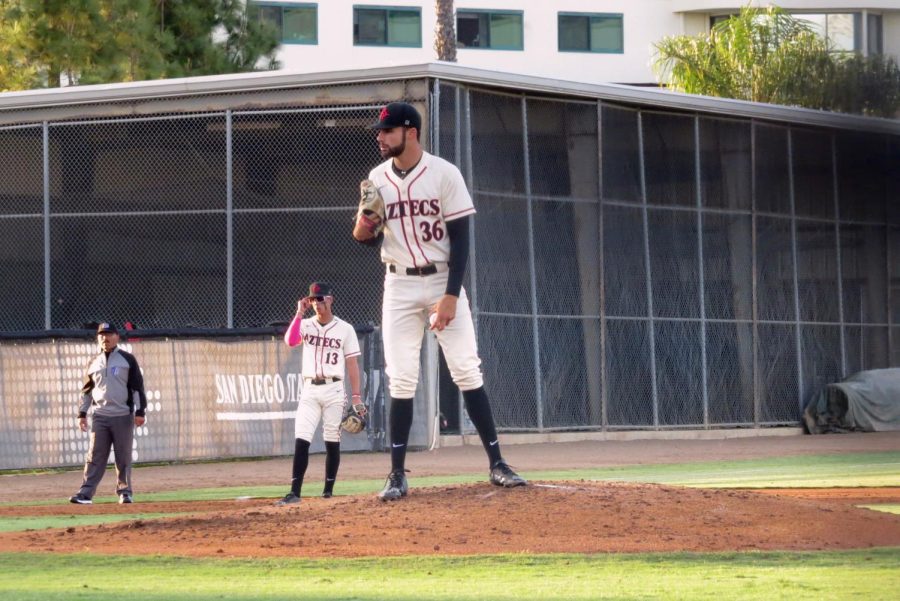 Senior Jacob Flores threw a career-high seven innings against GCU, but came away with the loss.

The Aztecs welcomed the visiting Antelopes of Grand Canyon University for a two-game series on Thursday and Friday.

Senior left-handed pitcher Jacob Flores took the mound in the first contest of the weekend against GCU, tossing a career-high seven innings, but was unsuccessful in securing a victory.

The visitors from Grand Canyon were early to their scoring routine in the top of the third with two runs courtesy of an RBI single by redshirt-senior Juan Colato and a fielder’s-choice that would bring Colato home two batters later.

GCU tacked on an additional two runs in the fourth following a batter being hit by a pitch, a walk and a single to bring the runners home.

The Antelopes couldn’t be stopped there, putting up another two runs on the board in the top of the seventh.

On the contrary, the Aztecs were held scoreless until the bottom of the seventh inning after junior Brian Leonhardt made it home from third base on a sac fly from junior Kenny Lebeau That was quickly followed by a double from junior Deron Johnson who scored on a single by sophomore Caden Miller.

The Lopes tacked on their final run in the ninth, securing the 7-2 victory over the Aztecs on Thursday night.

Junior right-handed pitcher Troy Melton took to the mound on Friday night and pitched the second complete game of his career helping the Aztecs secure the victory over the Antelopes and to split the two-game series.

GCU struck first in the top of the fourth after a batter made it home on a base hit up the middle of the field. That would be their only score on the night.

The Aztecs made a statement in the bottom of the sixth courtesy of freshman Pancho Ruiz’s single before advancing to third from a balk and stolen base.

Ruiz made it home following RBI singles from both sophomore Cole Carrigg and redshirt-freshman Tino Bethancourt.

Carrigg was able to score after a single, stealing two bases and was plated by a Bethancourt single.

SDSU secured the 2-1 victory over Grand Canyon, splitting the series.

The Aztecs will take on Stanford in a two-game series on Saturday and Sunday to close out the weekend. Following the four-game weekend, SDSU will head out on a four-game road trip, starting at Long Beach State on Tuesday, followed by a weekend conference series at Fresno State.