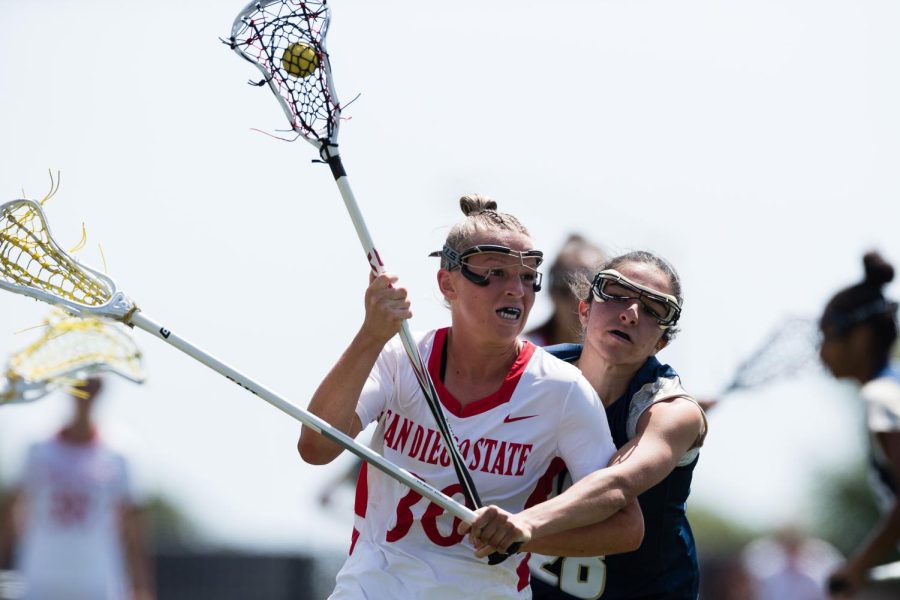 After freshman Ella Brislin and Grace Gebhardt got it started for the Aggies, sophomore Brook Waddell scored a hook shot for the Aztecs to make it 2-1.

Junior Alex Agnew — the leader in points on the team — stopped the momentum for the Aztecs with her goal to make it 3-1, then senior Deanna Balsama passed to Waddell who scored falling down to cut the lead to 3-2.

After Balsama scored her first of the game, the Scarlet and Black went back on offense and graduating senior Bailey Brown’s shot attempt was denied by freshman CJ Urbanic.

When Gebhardt extended the Aggies lead, the Aztecs went back on offense and got goals from Brown and Waddell to make it 6-5.

Balsama tied the game 6-6, but it wouldn’t take long for Brislin to score a free-position goal to retake the lead.

The Aztecs went on a 4-0 run to start the third quarter with goals from graduating senior Julia Lytle, junior Camdyn O’Donnell, Brown and Balsama.

The goals kept piling on and sophomore Sloane Skalstad set up a breaking Balsama for her fourth of the game to make it 13-7.

The Aggies finally got on the board in the third after 12 scoreless minutes and went on a 3-0 run to make it 13-10.

The Aztecs stopped the Aggies’ run with Lytle’s second goal of the game and made it 14-10 at the end of the third quarter.

Brown started the fourth quarter by picking up the draw control and scoring her third of the game, and the score was 15-10.

The Aztecs kept on rolling as Balsama, Lytle and O’Donnell scored to extend the lead to 17-10.

Gebhardt stopped the Scarlet and Black run with three-straight goals to make it 18-13.

Redshirt freshman Regan Arkless continued the Aggies’ run with her goal to make it 18-14, then head coach Kylee White decided to take a timeout.

“I talked about how we wanted to end this season knowing we don’t have any postseason play,” White said. “That is what makes us great when we are playing connected.”

Young and Waddell came out of the timeout with goals to stop the Aggies’ run, then Brown scored her fourth of the game and 27th of the season to pass her goal total of 26 last season.

Despite a 3-0 run by the Aggies to end the fourth quarter, the Aztecs had a big enough lead to come away with the 21-17 win.

Lytle — who had three goals and three caused turnovers — ended her only year with the Aztecs as the caused turnover leader at 25. She said it was a team effort all season.

“I only have the rest of the defense behind me to thank, they’re awesome,” Lytle said. “The coaches gave me confidence to go out and make plays.”

Brown — who had four goals and seven draw controls in the game — ended her final season with a team-leading 59 draw controls this season and could only thank her teammates.

“They give me the confidence to go out there,” Brown said. “I have their backs, they have mine so that’s how I was able to do that.”

Brown and Lytle — two of the five departing seniors — talked about what it meant to be a part of the team.

“Honestly, it didn’t even feel like I’ve only been here for a year,” Lytle said. “This team is like an absolute family to me and I’m so happy that this is why I picked a fifth year.”

Brown echoed Lytle about being a part of a family.

“If I didn’t love it, I wouldn’t be here,” Brown said. “It’s an amazing culture and family. They give it their all and they have your support.”

Although the Aztecs end on a high note, White said there will be a lot of things to work on in the offseason.

“We need to be better in our shooting, our shooting percentage I don’t think was fantastic,” White said. “As well as our discipline, our fouls hindered us this year a lot.”

Even though there is room for improvement, White said she was proud of how they competed against the Aggies and ranked opponents this year.

“I think having played so many ranked opponents has prepared us,” White said. “It has shown us that we can compete and then gives us a springboard into next year.”