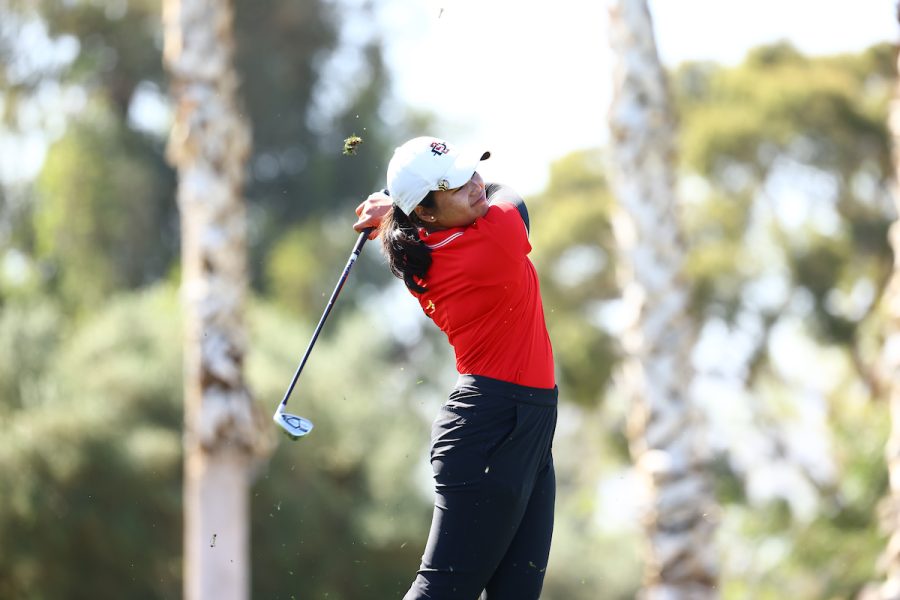 Junior Bernice Olivarez Ilas and the Aztecs will have to wait and see if they reach the NCAA Regionals. (Photo Courtesy of Jamie Schwaberow/NCAA Photos)

The San Diego State women’s golf team finished in a tie for sixth place at the Mountain West Championships in Rancho Mirage.

The Aztecs failed to earn an automatic berth to the NCAA Regionals and will have to hope for an at-large berth during the Division One women’s golf selection show on Wednesday, April 27 at 1 p.m. PT.

San Jose State — No. 5 in the nation according to Golfweek — won the team event and had one of its athletes win the individual title. The Spartans opened up the tournament with a 12-stroke lead after the first round and never looked back, eventually winning the tournament by a commanding 30 strokes with a final team score of 4-under-par 860.

Natasha Andrea Oon — the No.6 ranked golfer in the nation according to Golfweek — won the individual title by seven strokes with a 10-under-par 206. Her SJSU teammate Lucia Lopez-Ortega finished right behind her in second place and at 3-under-par and another Spartan joined the top three with Kajsa Arwefjall finishing in a tie for third at even-par.

The Scarlet and Black finished 39 strokes behind the winners with a 35-over-par 899. They finished in a tie with Nevada for sixth place, ahead of Colorado State and Wyoming in eighth and ninth respectively.

Junior Bernice Ilas was the highest finishing Aztec. She finished in seventh place with a 4-over-par 220 and shot a 1-under-par 71 to move up four spots on the final day of competition.

Sophomore Anna Lina Otten had one of her best finishes of the year, finishing in a tie for 15th. She shot a 9-over-par 225 and shot an even-par round of 72 in her first round.

Last year’s Mountain West Champion, senior Sara Kjellker, finished in a tie for 21st. Her best round of the tournament came in the 2nd round when she shot a 2-over-par 74.

The Aztecs will find out if there is more golf to be played this season during the selection show on Wednesday. The show can be seen live on Golf Channel at 1 p.m. PT.

The NCAA Regionals will take place May 9-11 across six different venues.