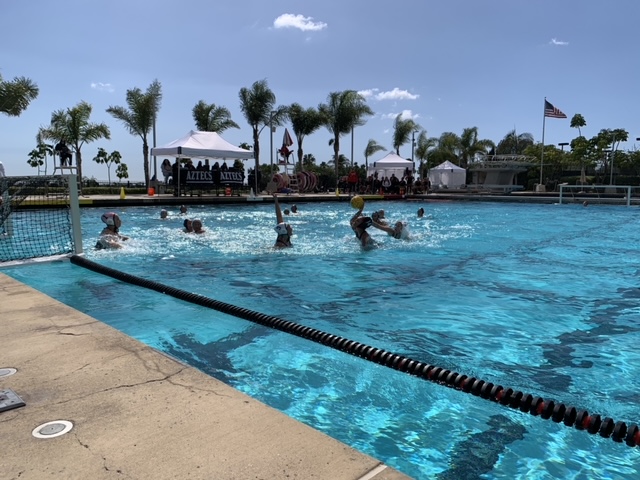 A water polo match at the Aztec Aquaplex during the Aztec Mini Invite on March 6.

Senior Delaney Binette led the Aztecs in scoring with two goals while senior Lucia Carballo, freshman Amanda Chambers, senior Jessica Leckich and junior Danni Croteau each added a goal of their own.

The Tigers tallied four different multi goal runs, including a 5-0 run that started in the closing seconds of the first half spanned almost the entirety of the third quarter until Binette scored with 1:11 remaining in the third.

Carballo scored the Aztecs’ first of the game after a Tigers goal early in the first quarter, but Pacific answered with a quick 3-0 run before Binette’s first goal of the game as the Aztecs finished the first down 4-2.

Chambers was the only Aztec to find the back of the net in the second quarter while the Tigers scored three more to enter the half up 7-3 before exploding out of the break to put the game away with the aforementioned 4-0 run to open the third.

The Aztecs, however, did capitalize on their power play chances, going 3-5 while the Tigers only scored on  four of their 11 chances.

The loss was the Aztecs’ third game of the weekend after a 8-7 OT win over Azusa Pacific in the quarterfinal, before losing to No. 8 (and Golden Coast top seed) Fresno State 10-7.