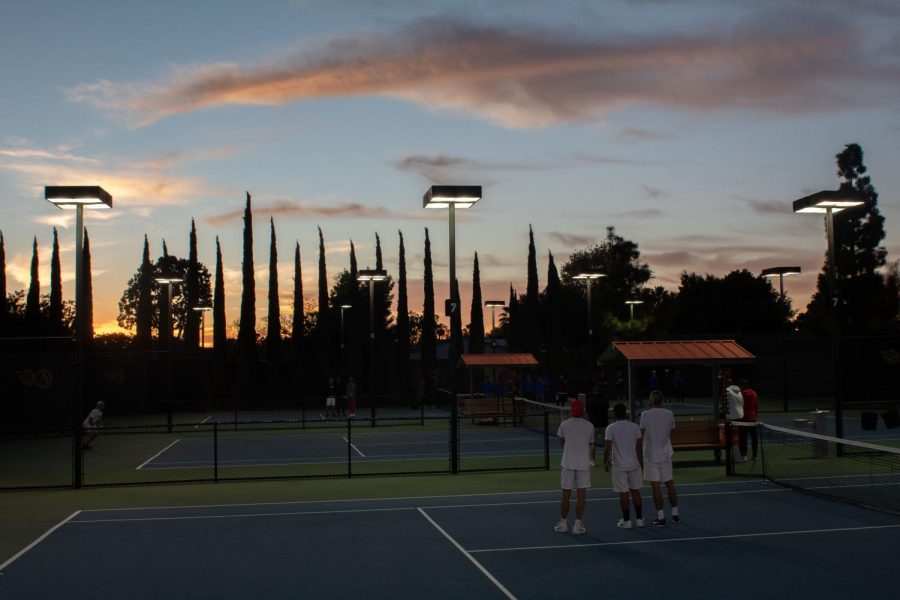 Three members of the SDSU men's tennis team overlook a match while the sun sets at the Aztec Tennis Center.

If SDSU was to win this match, they would have to do it in singles competition.

Seeman secured the first singles win for SDSU by dropping Arca Costas 6-2, 6-4 at the No. 2 singles spot for his tenth singles win of the season.

While the Broncos regained the lead after the defeat of sophomore Jules Auffray, Castro’s 6-2, 6-4 victory over Marquart evened the score back up at two points apiece.

The score was again knotted up at three after a win by Tyler and a loss from Blair, leaving the game’s fate in the rackets of Aztecs freshman Alexander Mandma and Moortgat.

Mandma won the first set 7-6 (5) but Moortgat evened up the score by winning the second set by the same score. In the decisive third set, Mandma crushed the worn-out Moortgat 6-1 to get the win for SDSU.

However, the Aztecs couldn’t keep up their winning ways against the Wolfpack as they missed out on ending their year on a three-game win streak.

The win gave Nevada the outright league title and the overall No. 1 seed in the upcoming Mountain West Championship. Meanwhile, the Aztecs will be slotted in at No. 4 and will face No. 5 Air Force.

SDSU and Nevada split the first two doubles matches, but the Wolfpack took the point after Seeman and Rikkonen were defeated by the sophomore team of Loris Zisswiller and Satchel Benn.

The Aztecs only had two victories on the singles side of the court. Mandma won the first point for SDSU by beating Benn 6-3, 6-3 while Castro temporarily tied the match at two with his defeat of senior Delmas N’Tcha.

However, a pair of three-set wins secured the game for the Wolfpack.