The Daily Aztec • May 2, 2022 • https://thedailyaztec.com/110189/artsandculture/leslie-david-baker-and-industry-professionals-impart-career-wisdom-to-seniors-at-life-after-college/ 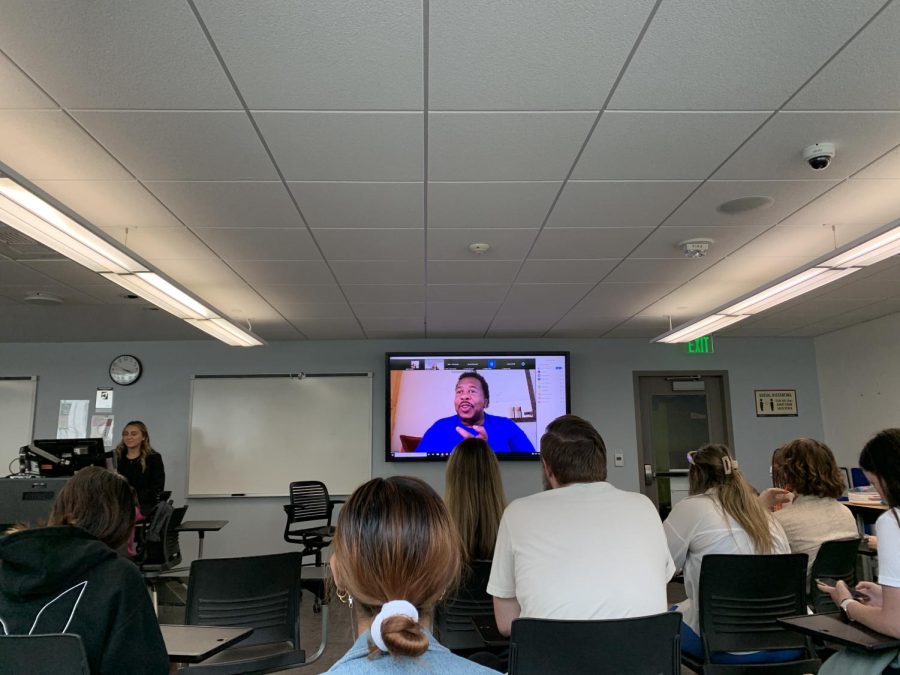 Actor Leslie David Baker, best known for his role as Stanley Hudson on "The Office," gives advice regarding how to navigate post-college life to a room of graduating seniors in Storm Hall on Friday, April 22, 2022.

With graduation only a few weeks away, San Diego State seniors are scrambling to figure out what life will look like after college. The million dollar question of this time of year is, ‘So, now what?’

Is this path really the right decision? Do I have to have a plan for my entire life in order to be a proper adult?

Actor Leslie David Baker, best known for his role as Stanley Hudson on “The Office,” assures students that every fork in the road is an opportunity and not to be afraid to take risks.

The College of Professional Studies and Fine Arts hosted the “Life After College Event” on April 22 at Storm Hall with Baker, as well as a panel of other industry professionals discussing their career paths and advice about the future to graduating students. This panel included interior designer Maegan Swabb, San Diego legislative assistant Eliran Hershko, HBO art department assistant Ava Anderson, local artist Mee Shim, and the Director of Human Resources at the Hyatt Mission Bay Tom Celli.

With a wide range of stories of how each professional got to the positions they are in today, they told students that there is no one straight path for all.

“There’s no formula for being a full-functioning adult,” Baker said.

As hard as it may be to believe, anyone who says they have their life together is lying. No one truly has their lives together.

A recurring theme within the speakers’ responses is the obstacles that come along with adulting. These bumps in the road are what bring the biggest victories. The hardest part is learning how to react to them.

Maegan Swabb spoke about a difficult time in her life when her interior design team was diminishing and the stress she had to endure trying to find a new team.

“You have to be optimistic about the future,” Swabb said.

Swabb considers herself a hustler, but it’s her optimism and her “going with the flow” attitude that led to her further success in her interior design firm, M. Swabb Interior Design.

Tom Celli carried that same optimism after he graduated from the University of Nevada, Las Vegas. He moved to Palo Alto, California for a job opportunity as an assistant front office manager at a Hyatt hotel. It was an uncomfortable feeling for him to move because he didn’t know anyone in Palo Alto.

“It’s OK to be uncomfortable. Know that you’re going to make it on your own. Putting yourself in uncomfortable situations, you grow more as a person and as a professional,” Celli said.

Before he was the internship coordinator for the office of San Diego County Supervisor Joel Anderson, Hershko was unemployed after burning out working in marketing at his parent’s company.

Emotional and mental burnout was one of the biggest obstacles Hershko has had to endure in his career.

“You need to carve personal time for yourself to bring yourself back in because burnout can be career-ending in some cases,” Hershko said.

Burnout is concerning for many professionals, but it’s getting your foot in the door that’s more nerve-wracking for college students.

Local artist Mee Shim told students getting your foot in the door means your job is halfway done. Once that’s accomplished, you’re halfway through the hardest obstacle in your career.

SDSU alumna Ava Anderson emphasizes this and the importance of these leaps of faith.

“There’s no one way to get into what you want to do,” Anderson said.

For Anderson, it’s these wise leaps she took, the internships she was involved in, and her networking opportunities that landed her current position at HBO as an art department assistant.

The thought of graduating is already a daunting prospect for most students these days. Students can’t compare their postgraduate career paths and choices. Every student has their own path. But taking risks after graduation is what keeps these paths evolving.