The Daily Aztec • May 4, 2022 • https://thedailyaztec.com/110194/artsandculture/vada-vada-fans-gather-at-music-box-for-an-enjoyable-evening/ 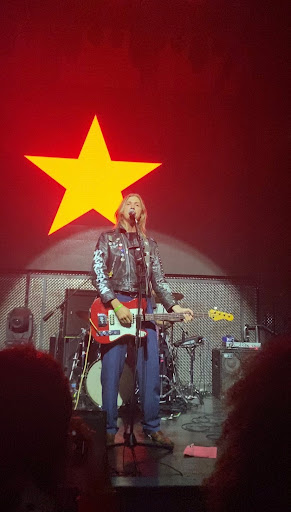 Wyatt Shears (aka Enjoy) singing and playing bass for a crowd of long-time Vada Vada fans at Music Box on Sunday, April 24.

On Sunday, April 24, Enjoy performed at Music Box San Diego for the second to last show of his brief New York/Southern California tour, playing an unforgettable set for San Diego locals and Vada Vada enthusiasts. Doors opened at 7 p.m. as fans flooded the front of the pit to secure a good view of the show.

A niche group of the experimental music obsessed might find themselves in the ‘Vada Vada’ rabbit hole at some point. Vada Vada is closely associated with a collective of artists showcasing unique experimental sound. Most well known in Vada Vada is the iconic twin duo The Garden, consisting of bassist and vocalist Wyatt Shears and drummer Fletcher Shears who come together to form an eccentric electronic punk sound. They coined the term Vada Vada to represent “total freedom of expression without boundaries or guidelines of any sort,” as they mention on their website.

Both members of the duo have side projects of their own. Wyatt Shears makes his own music as Enjoy and Fletcher Shears’ showcases his sound through his project Puzzle. Both are known for their oddly distinctive styles, experimenting with different electronic elements and sound effects.

The Garden has previous ties with San Diego State, dating back to 2018 when SDSU’s Aztec Music Group, interviewed the duo, before the pair picked up traction amongst a broader group.

The Mainliners, an up and coming Los Angeles based band, opened the show by playing some hearty punk rock tunes, whirling the crowd to form energetic moshes.

Mace, a Vada Vada fan who attended the concert, estimates to have been to around 25 shows in total.

“I liked The Mainliners set, they’re definitely one of the best openers the twins have had for a Vada Vada show in awhile.” Mace said.

The second opener, Tommy Midnight, slowed it down with a unique and ambient set. His soft vocals leaned towards passionate spoken poetry at times, and occasional guitar and keyboard synths created a still atmosphere, allowing fans a moment to catch their breath between the two high energy performances.

Between sets, the crowd surged to the stage anticipating Shears’ appearance. Those looking for a tamer concert experience gathered on the second and third floor of the Music Box venue, wanting a good view without the hassle of fighting for a good spot in the pit.

At around 9:30 p.m, Enjoy finally took the stage, opening with his song “Genetic Tree,” from his most recent album “Sessions with a Nasty Old Tree.” The crowd screamed and pushed to the front in excitement as people hastily pulled out their phones wanting pictures of Shears’ entrance.

Shears played a variety of songs from his discography, including both newer and older songs dating back to his first 2012 album “Deep Cuts.” Some of his more popular songs like “Small Car With Big Wheels,” “Fold Ya’ Up Like a Blanket,” “I’ve Got The World In My Pocket” and “Lounge Thoughts” had a lively crowd reaction as fans screamed the lyrics in unity and moshed in the pit.

Shears’ thanked the crowd before ending his set with his most popular song, “I’ve Wasted So Much Time.” After leaving the stage, the crowd cheered “one more song!” Enjoy and his crew came out one last time to perform “Why@” off of his 2016 album “Another World For Joy.”

Katerina Portella, a first year journalism major, talked about what she liked about the show.

“I like how Enjoy incorporates instrumentals and how he uses a bass guitar. I also liked how he went from really high energy vocals to slowing it down, keeping the crowd steady,” Portella said. “The crowd was very intense at times, but overall, I had a really great experience.”

After the performance, fans lined up to buy merchandise, including Enjoy tee shirts, vinyls, and some limited edition Tommy Midnight tees. The night ended with fans gathering outside of the venue to socialize, some waiting near the tour bus hoping to snap a picture with Shears before he took off.

Enjoy will finish off his tour with a final show in Santa Ana on May 7.