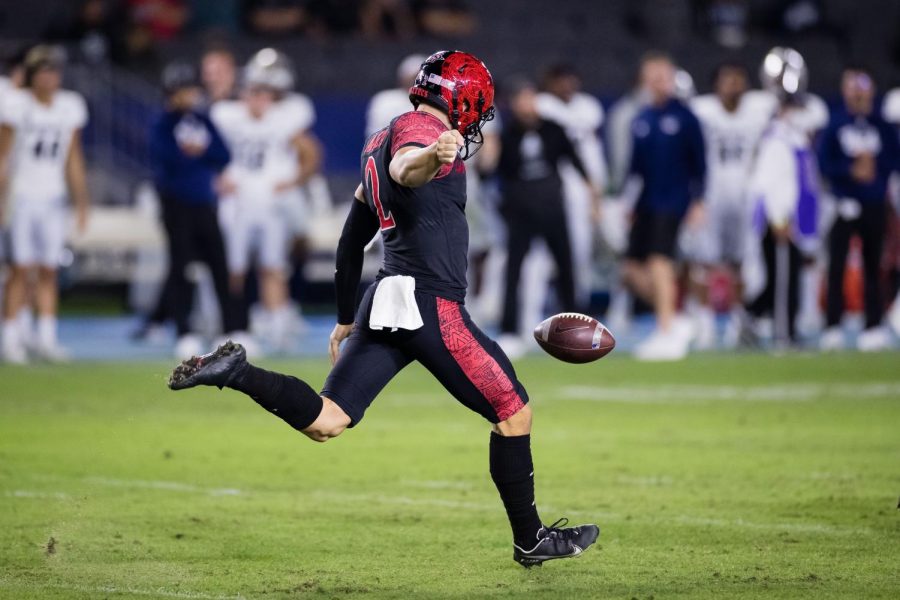 Matt Araiza was one of four Aztecs selected in the 2022 NFL Draft. He was selected by the Buffalo Bills in the sixth round. (Photo courtesy of Derrick Tuskan/SDSU Athletics).

It was a phenomenal 2021 season for San Diego State football. Twelve total wins including two against Pac-12 teams and a big win in the Frisco Bowl over No. 24 UTSA.

For the first time since 2012, four SDSU football players heard their names called in the NFL Draft.

Going first was star defensive end Cameron Thomas, who will be chasing down quarterbacks like Matt Stafford and Jimmy Garoppolo in the NFC West after being selected by the Arizona Cardinals in the third round with the 87th overall pick.

A hamstring injury hindered Thomas throughout his preparations for the Draft, keeping him out of the Senior Bowl and limiting him at the NFL Combine and SDSU’s Pro Day.

While his patience was tested, it was eventually rewarded as he goes to a team that employs future Hall of Famer J.J. Watt on their defensive line, who Thomas modeled his game after.

In his final season as an Aztec, Thomas led the Scarlet and Black with 20.5 tackles for loss and 11.5 sacks en route to being named the Mountain West Defensive Player of the Year.

To New York goes tight end Daniel Bellinger, who will don a Giants jersey after being selected by the Big Blue in the fourth round.

The sixth tight end drafted, the run-heavy SDSU offense hindered Bellinger in the Draft as he was limited in the amount of passes he caught at SDSU. An excellent run blocker, his lack of catches led many to believe he would go closer to the sixth round.

An excellent day at the Combine bumped his stock up and New York capitalized by taking him with the seventh pick of the fourth round. He will be able to make his case for starting time as after Evan Ingram left for free agency.

Most surprisingly, however, is the fate of punter Matt Araiza. The Ray Guy Award winner was the third punter selected in the Draft, much to the amazement of NFL Network broadcaster Rich Eisen and SDSU fans. The Buffalo Bills cashed in, selecting The Punt God with the first pick of the sixth round.

Many were expecting Araiza to be selected early on Day 3 of the draft, but the lefty punter continued to slide further and further as teams passed up on him.

There are multiple theories as to why Araiza wasn’t selected, but he and his booming leg will now head to Buffalo. While the Bills tied the Cardinals for the least amount of punts in the 2021 (52), they may be more inclined to do so with Araiza fielding the ball as he averaged 51.4 yards per punt and sent six footballs over 70 yards.

While Zachary Thomas has mostly played at the tackle position in college, a move to guard isn’t impossible as it would better utilize his run-blocking skills. If he gets to see the field, he will be making sure quarterback Justin Fields and running back David Montgomery will be protected.

In 2012, another quartet of Aztecs got the call that they had been selected by an NFL team. Running back Ronnie Hillman, linebacker Miles Burris, quarterback Ryan Lindley and defensive tackle Jerome Long all went on to play football at the professional level.