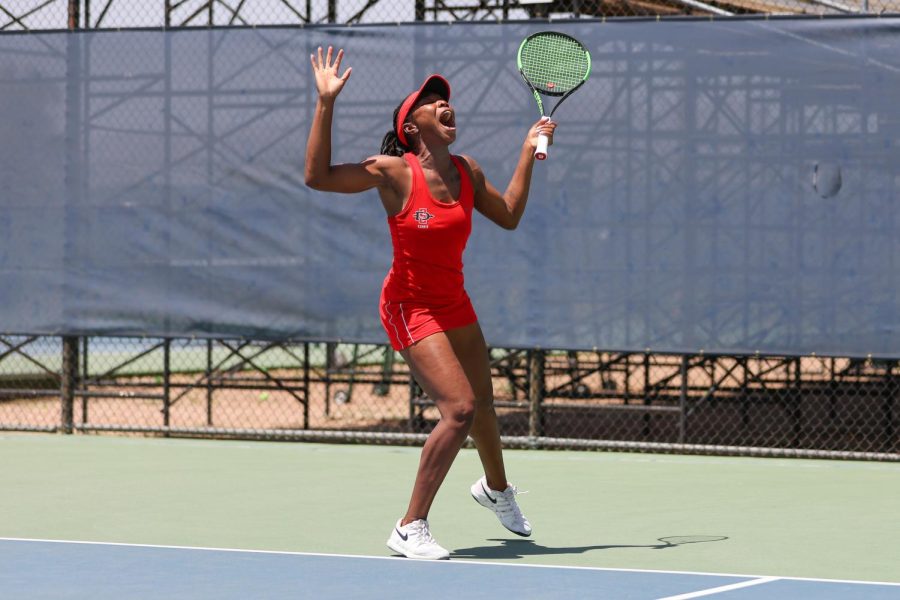 San Diego State University’s women’s tennis team won the Mountain West Conference Championship after a 4-1 win in the final over the University of Nevada, Las Vegas.

“The team felt like it was our title to win,” head coach Peter Mattera said to goaztecs.com. “It was just a tremendous effort by this team.”

The title is the Aztecs’ first conference title since 2003 and automatically sends them to the NCAA Team Women’s Championship for the 23rd time in school history.

Going into the tournament, the Aztecs had two players named to the 2022 Women’s Tennis All-Conference teams. Seniors Bunyawi Thamcahiwat — who is No .78 in the national ITA rankings — and Tamara Arnold were placed on the all-conference singles and doubles teams.

The Aztecs’ road to becoming Mountain West victors started with a quarterfinal matchup against the University of Wyoming on Thursday, April 28.

The duo of senior Alicia Melosch and junior Cécile Morin secured a 6-2 doubles win followed by seniors Nnena Nadozie and Regina Pitts, who won in a 7-6 (3) tiebreaker to secure the doubles point.

Thamchaiwat, Melosch, and junior Julia Jordan then secured the win for the Aztecs by winning their singles matches before the others could finish.

The Aztecs were then matched up against Colorado State University in a semi-final battle on Friday, April 29.

Yet again the Aztecs dominated the competition, this time winning 4-1.

For just the ninth time this season, the Aztecs dropped the doubles point with only the No. 85 ranked duo of Thamchaiwat and Arnold picking up a win, with a convincing 6-0 victory.

Despite going down early, the Aztecs fought back and won four singles matches to secure the semi-final victory.

Nadozie, Arnold, Jordan, and Melosch were the four Aztecs to rally the team to victory with their consecutive singles wins.

The Aztecs were now Mountain West Championship bound in a matchup against UNLV on Saturday, April 30.

Coincidentally, in 2019 when the last Mountain West Championships were held, the final also featured both SDSU and UNLV with UNLV taking the win 4-0.

This time it was the Aztecs who broke into celebration as they defeated UNLV 4-1.

San Diego opened the match on the back foot after again dropping the doubles point.

But much like the previous day, The Aztecs rallied back after losing their doubles point and took control of the game.

“To be able to come back again today speaks to our overall team depth and our confidence regardless of who we are playing and what the situation is,” Mattera said to goaztecs.com. “They believe in themselves and each other. We were down 1-0, just like yesterday, and to go out after a five-minute break and not let it bother you. We were determined. We wanted the conference title. We wanted to go to the NCAAs. We were not going to let being down 1-0 bother them.”

Thamchaiwat, Arnold, and Melosch all won their matchups but it was who Nadozie clinched the Mountain West title for the Aztecs with a 6-4,6-2 win over UNLV senior Izumi Asano.

“It is so fitting that Nnena (Nadozie) got to clinch the match. I could not be happier for her,” Mattera said.

Next, the Aztecs will face the University of Southern California in the first round of the NCAA tournament after being drawn against them on Monday, May 2. The match will take place Friday, May 6 at 10 a.m. at Pepperdine University.