The Daily Aztec • May 5, 2022 • https://thedailyaztec.com/110211/showcase/bluegrass-artist-billy-strings-strums-a-night-full-of-melodies-with-psychedelic-flair/ 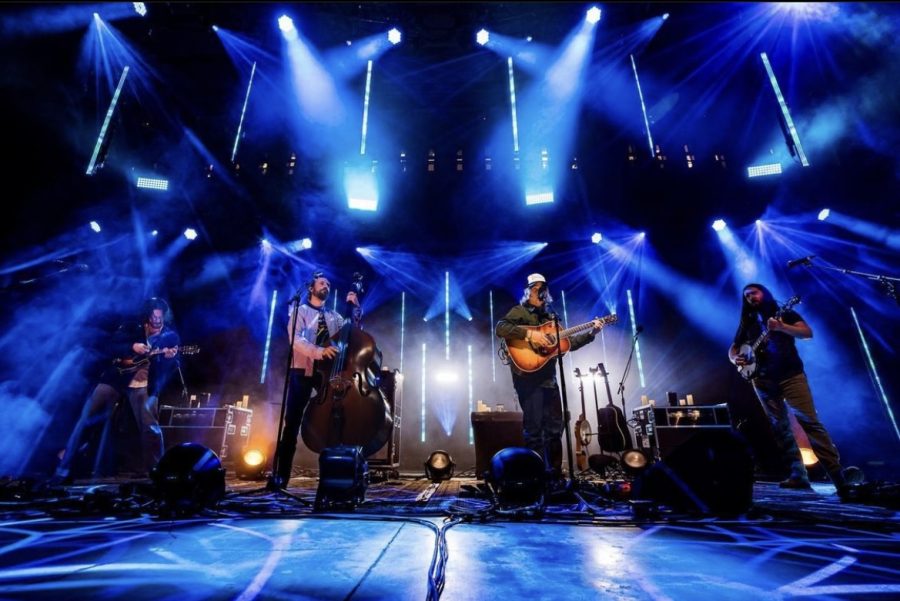 Conversation struck between strangers – cowboy hats and sequin fedoras, tie-dye vests and plaid button-ups, quilted skirts and Levi jeans – all meshed together in a frenzied mass. Fans, from all walks of life, stocked up on snacks and beer before settling in their seats.

“I’ve been following [Billy Strings] for a while,” fan and concertgoer Aria Aguirre said. “I grew up listening to Yonder Mountain String Band [another bluegrass artist], and then Billy Strings came around and took off. My dad listened to him and we went to a concert together a few years back– we love listening to him together.”

In addition to attending Billy Strings’ San Diego concert, Aguirre and her father had attended his show a few nights before in Santa Ana, CA. Many attendees sported vibrant band tees with graphics from previous tours, boasting their commitment to the bluegrass icon.

With a newly purchased band tee slung around his neck, fan and concertgoer Beau Limbocker surveyed the venue as the audience continued to take their seats.

“I like getting in the crowd,” Limbocker said. “I enjoy the rawness of the music and being with people who have the same musical interests.”

A fan of classic rock, Limbocker mostly listens to Billy Strings’ earlier albums for their authentic, acoustic feel. With his newest release, “Renewal,” Billy Strings has built upon his bluegrass roots, interweaving “elements of heavy metal, jam bands, psychedelic music and classic rock,” according to his website.

“I prefer the more classic, acoustic sound,” Limbocker said. “I’m interested to see how many synthesizers he uses tonight.”

The excitement of the crowd crescendoed as the stage lights went dark. From the sea of people a fan shouted, “do it, Billy!” breaking the silence.

Then, with a burst of color, Billy Strings took the stage. Flanked by his bandmates– Billy Failing (banjo), Royal Masat (bass), and Jarrod Walker (mandolin)– he broke into a twangy, vibrant rendition of “Come Down the Mountain Katie Daly,” stirring the crowd into motion.

At the conclusion of his opening song, Billy Strings welcomed the whooping crowd to a “bluegrass shindig,” introducing his ensemble as a “highfalutin, weed smokin’ bluegrass band.” The energy of the performance heightened as the band plunged into the lively, and slightly sardonic, “This Old World,” a track from Billy Strings’ latest album.

“This old world took me for a ride/I lost everything I had and then my pride,” he crooned, meditating on the bittersweetness of life with the light-hearted cynicism that characterizes his songwriting.

Barely a breath after the song’s conclusion, the lights, hanging in vertical lines like elongated raindrops, softened into shades of blue and green as the band began to play “Taking Water,” another track from “Renewal.” Perched upon the amps and speakers, candles of varying heights softly glowed. The stage design was simple but colorful, putting the band’s impressive musicianship and down-to-earth charisma in the spotlight.

A string musician of over twenty years, Billy Strings plucked his guitar, banjo and mandolin with ferocity and focus. While his smoky, full-bodied vocals mesmerized the audience, many songs in his repertoire were strictly instrumental.

“Classical music is my favorite,” Aguirre said. “But Billy Strings has a lot of songs that focus on instrumental melody. Those are the pieces I like to listen to.”

Self-proclaimed “superfan” Michelle Meyers took a front row seat at Billy Strings’ Las Vegas show the night before. However, at the San Diego performance, she stood at the top of the ampitheatre, eyes glittering as she swayed to the music.

“Last night, I was ten feet away from him,” Meyers said. “And tonight I’m in the back row. Regardless, [Billy Strings] is a superstar– he’s excellent.”

Meyers commended Billy Strings for his experimentation on his new album, complimenting his “psychedelic flair.” With use of a pedalboard, Billy Strings and his band played music that vacillated from orchestral acid rock to pure, unadulterated bluegrass. Throughout the set, no more than the four string musicians played at once, allowing them to demonstrate the versatility of their instruments and artistry.

As his performance wound down, Billy Strings took the stage alone, his guitar strapped around his shoulders. From beneath his baseball cap, he sang reverently, allowing the audience to witness the power that music holds in a simple, acoustic lineup. The licks he played had a lively texture – warm with a metallic tang – but it was his introspective, narrative lyrics that sparkled in the single spotlight.

“I used my only phone call to contact my daddy/I got twenty long years for some dust in a baggie,” Billy Strings sang during his performance of “Dust in a Baggie” – a plucky fan favorite about a drug user who ends up in jail.

Donning denim overalls, one fan danced up and down the aisles. Another perched their child atop their shoulders while jubilantly singing along. An old man sat intently, a peaceful smile fixed upon his face as he tapped his foot in time with the music.

While Billy Strings is known as an artist in the realm of bluegrass, his influence is far-reaching. With musicianship that spans genres and storytelling that resonates across demographics, his artistry is a reminder that music is a mode of human connection.

“As a fifty-eight year old, I’ve seen a lot of phony fans,” Limbocker said. “I think Billy’s audience is more genuine than most.”