The Daily Aztec • May 4, 2022 • https://thedailyaztec.com/110223/showcase/pancho-barraza-leaves-the-crowd-energized-at-cal-coast-theatre/ 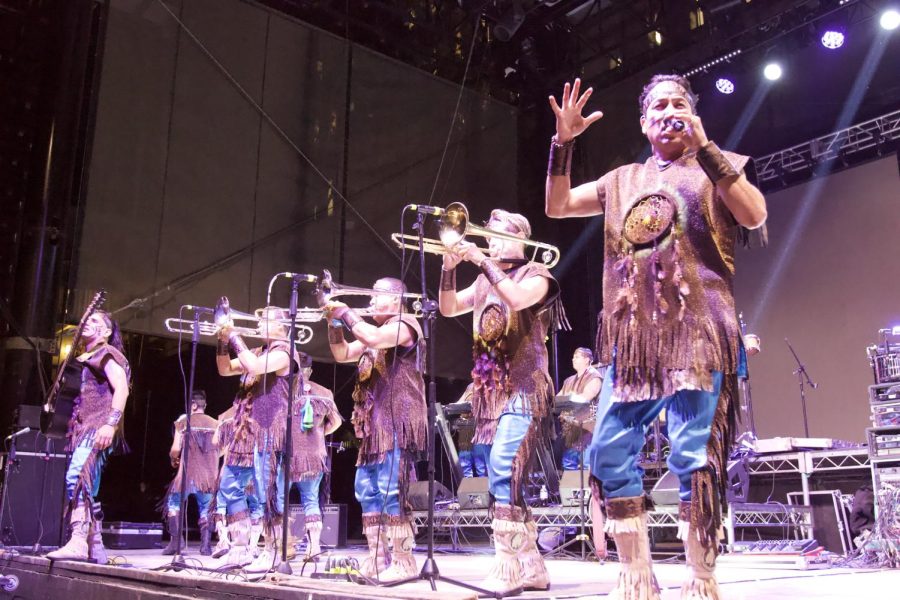 Members of Cuisillos performing and hyping up the crowd making sure they were on their feet. Everyone was left feeling energized and enlightened during the concert.

Everyone who came saw Pancho Barraza give an epic performance on his 30th-anniversary tour making his fans drenched in sweat as they sang and danced to their favorite singer all night long.

In the beginning, Banda Cuisillos enlightened and prepared the crowd for a night full of dancing. The band was originally formed in Tala Jalisco in 1987, and they always represent their ancestors’ attire. The band wore light blue pants, brown poncho sweaters, blue headbands, light brown boots and dreamcatchers.

“The concert was a good representation of Mexico itself. It was a colorful environment filled with music and with a strong aspect of Mexican culture,” Kimberly Jimenez, a fan at the concert, said.

Cuisillos had powerful energy that was shown throughout the whole concert. Many fans had headbands that said the bands’ name showing their love for them. With songs like “Mil Heridas,” “Vanidosa” and “Ya No Mires Asi,” the lively music made fans dance as soon as they hit the stage.

Jimenez described the feeling she got when she saw people express Mexican culture.

“The demographic and the background of the attendees felt like home,” Jimenez said. “The men wore the typical ‘sombreros.’ I felt like I was in a Mexican town party like my mother speaks from her youth.”

When it was time for the main event and the fans patiently waited until dancers wearing the colors yellow and blue came out to dance. The crowd lost it as they started to jump and scream with joy for the main event.

Barraza, originally from Juan Jose Rios, Sinaloa, Mexico, made his fans sing along to one of the most popular of his songs like, “Mi enemigo era el amor” (My enemy was love), “Ignoraste mi lagrimas” (ignored my tears) and “Musica romantica” (Romantic music). Making the crowd not stop dancing and singing his best hit. The singer had an extraordinary show performance with the captivating choreography of his dancers. Banda, mariachi and chorus singers gave life to his performance.

“Other artists will not engage with the fans. When Pancho Barraza sang I felt the heartbreak and I felt the love,” Jimenez said. “I had listened to his song ‘Ignoraste Mis Lagrimas’ before, but the way Band and Mariachi played it instantly took me to that special person I couldn’t keep.”

During his performance, Barraza paid tribute to the legendary Mexican singer Joan Sebastian who passed away in 2015. Images from Joan Sebastian, well known as “El Rey del Jaripeo” were projected on the sections of the screen in the background of the show in honor of him. The set led to an excellent show since the public was on their feet for the whole concert.

“He wasn’t what I thought he would be,” Jimenez said. “I was left stunned and based on his performance, vocals, and charisma onstage I am now a fan.”