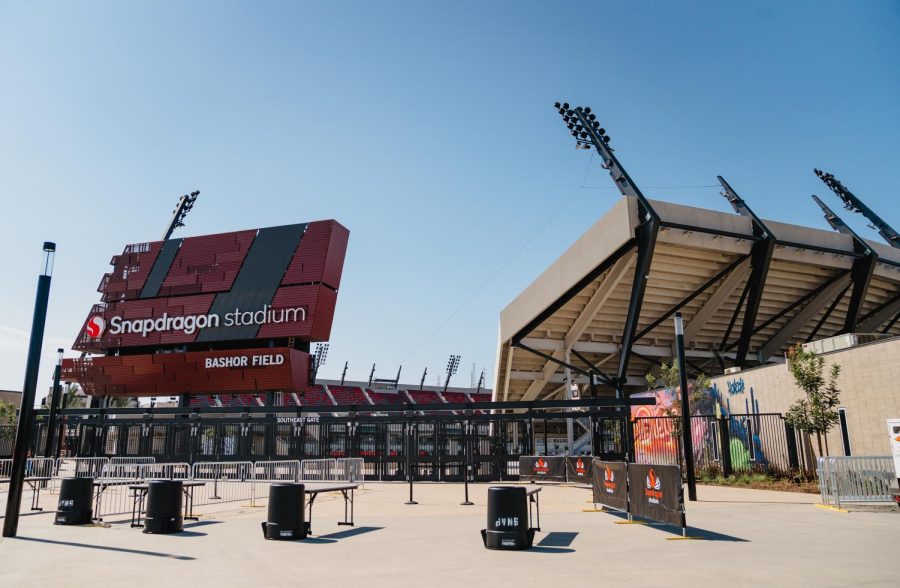 Snapdragon Stadium finished construction this fall. The new stadium will serve as home for many Aztec sports.

by Morgan Prickett and Justin Cox

Snapdragon Stadium is San Diego State University’s brand new host for sporting events. Following two consecutive seasons of having to make the trip up to Carson, the Aztecs finally have a place they can call home. Over the course of this fall semester, the Aztec football team, men’s soccer team and women’s soccer team will all make appearances at the new venue. In the following guide, enjoy a preview of each matchup scheduled to take place at Snapdragon Stadium.

The Aztecs will face the Wildcats to mark Snapdragon Stadium’s first-ever sporting event. After a year of having to make the trip to Dignity Health Sports Park in Carson, the Aztecs can finally call this stadium their home. The highly anticipated matchup is the second between the two schools in the last 20 years. The most recent meeting between the schools occurred in Tucson, Arizona last season where the Aztecs routed the Wildcats 38-14. The previous matchup took place all the way back in 2001 when the Wildcats claimed a 23-10 win. The Aztecs are 6-10 against the Wildcats since 1931.

The Aztecs’ second-ever game at Snapdragon Stadium, will also be their second-ever game against the Bengals. The previous matchup between the schools took place back in 2004 when the Aztecs were victorious 38-21. During that matchup, the Aztecs went rampant and scored 24 points on their first three possessions in the first quarter. If the Aztecs want to replicate last season’s AP Top 25 College Football Poll finish, they may need to channel some of the offensive energy that they showed against the Bengals back in 2004.

The Aztecs will meet their Pac-12 foes, the Huskies, on Sept. 29 for the program’s first and only match at Snapdragon Stadium this season. The two schools met four times in just the year 2021 where the Aztecs went 1-3. Since the first matchup between the two schools in 1983, the Aztecs have a 7-8-24 all-time record against the Huskies. So it looks like the Aztecs will be heading into Snapdragon as the underdogs in their own town. But it would set up quite the spectacle if the Aztecs could pull off a win on one of the brightest stages they’ll play on all season.

San Jose State will make the trip down to Snapdragon Stadium as the Aztecs look to secure victory during their one and only match at Snapdragon Stadium this season. Last season this was one of the Aztecs’ most even battles as they tied 0-0 even after requiring double overtime. Interestingly enough, that was only one of three times the Aztecs found themselves in double overtime last season. The previous meeting, before the tie, resulted in a dominant 6-1 win for the Aztecs. The Snapdragon crowd will be looking for a replica of that dominant win two matches ago and who knows, maybe we will see the women’s soccer team get some more playing time at Snapdragon as well.

During the last 10 meetings between the schools, dating back to 2012, the Aztecs have won in eight of their meetings. Although in the last four years, the Rainbow Warriors have proved to be more of a challenge, winning two of the last four meetings. Both sitting in the West Division of the Mountain-West Conference, this game is bound to be a battle between these west coast schools. Despite the elimination of divisions in the Mountain West next season, these teams are still scheduled to play each other three times over the next three seasons.

The Aztecs have proved to be the more dominant team in their matchups with the Rebels. The all-time record between the schools tilts in favor of the Aztecs at 21-10. The Aztecs will also have the opportunity to make some history. With the Aztecs’ current longest-winning streak against the Rebels sitting at four, they will have the opportunity to tie that record with a win against the Rebels on Nov. 5. When playing the Rebels at their home stadium, the Aztecs have an even better record. They have dominated the Rebels 12-4 at home, so the odds are in the Aztecs’ favor to put on a show for the Snapdragon crowd.

The Aztecs’ game against San Jose State will be their most recent game against a Mountain West Conference Champion. The Spartans were crowned after defeating Boise State with an empty stadium in Nevada in 2020. After getting blown out in last year’s Conference Championship to the Utah State Aggies, the Aztecs may look to channel their revenge towards the Spartans as they also have the crown which the Aztecs desire. The last meeting between the two schools was a defensive battle up in San Jose. The game went to double overtime and neither team managed to score a touchdown until the Aztecs scored in the first overtime. The Aztecs were the ones to come out victorious 19-13.

The history between these two schools tells two completely different stories. On one hand you could believe that these schools have been very even over the years, with the Falcons winning more games than the Aztecs all-time. But then if you look at the more recent history, you would think the complete opposite. Since 2010, the Aztecs have not lost a game to the Falcons. The Aztecs are currently sitting on a nine-game winning streak with the chance of bumping it up to 10 at their last regular-season game at Snapdragon Stadium. It might not be the last though, as a Mountain West Conference Championship game at Snapdragon could be in the Aztecs’ future.