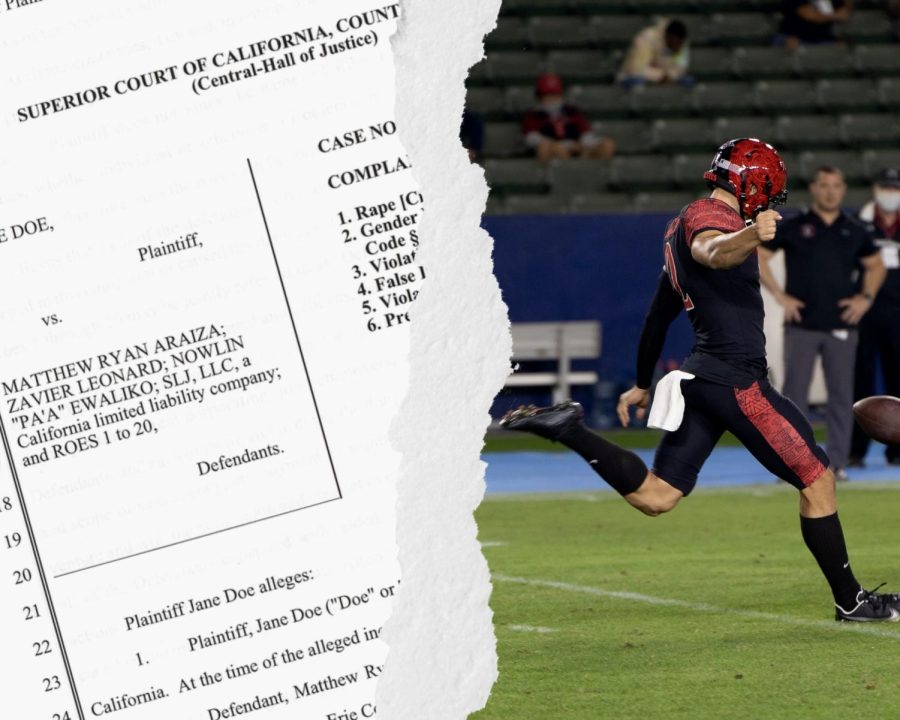 Former Buffalo Bills punter Matt Araiza is one of the three named in a lawsuit accusing him of gang-raping a 17-year-old girl last October at an off-campus party.

The defendants named were former Buffalo Bills punter Matt Araiza, an SDSU junior at the time of the alleged incident. Also included were Zavier Leonard and Nowlin “Pa’a” Ewaliko, who were on last year’s team but are no longer on the roster. Leonard was on this year’s roster, but was removed after the lawsuit was filed, according to The San Diego Union-Tribune. Following the news of the suit, Araiza was released from the Buffalo Bills. The plaintiff is also suing the property owners where the alleged gang rape occurred.

According to the lawsuit, the men assaulted her in the early hours of Oct. 17. The alleged victim, referenced as Jane Doe, arrived at Araiza’s house party already intoxicated. Doe was given a drink by Araiza, the complaint reads, which she said she believes contained other intoxicating substances other than alcohol.

Doe told Araiza she was a high school student and then was taken to a room where Leonard, Ewaliko and at least one other man were, according to the complaint. It is said Doe was thrown down face first on the bed and raped for an hour and a half. It also states she left the room bloodied and crying and her nose, belly button and ear piercings had been ripped from her body.

The party on Rockford Drive came after one of SDSU’s biggest wins of the season against reigning Mountain West Champions San Jose State.

“We reaffirm that the university takes allegations of sexual assault seriously, and many on this campus have dedicated years to education, training, policy creation and other actions to avoid anyone experiencing what is alleged to have occurred,” the email reads. “Never would we allow anyone in this institution to be protected against being held accountable for their actions.”

The attorneys representing Ewaliko and Leonard could not comment on the suit, according to the LA Times.

Araiza’s lawyer Kerry Armstrong said he hadn’t reviewed the complaint but called the rape accusation false, according to The LA Times. Armstrong said he believes there was no doubt that Araiza did not rape the teen.

SDSU officials have been criticized for how they handled the case. Critics specifically noted the campus community was not notified for months after officials learned of the allegations. SDSU was informed of the assault in October 2021 under San Diego Police jurisdiction. According to a June 8 email from de la Torre, San Diego Police officials formally requested the university not initiate an investigation to prevent potentially compromising the police department’s ongoing work.

San Diego Police Department did not give SDSU formal notification to move forward with their own inquiry and process until July 22 according to an email from de la Torre on Aug. 1.

The San Diego County district attorney’s office has not announced whether charges will be filed.