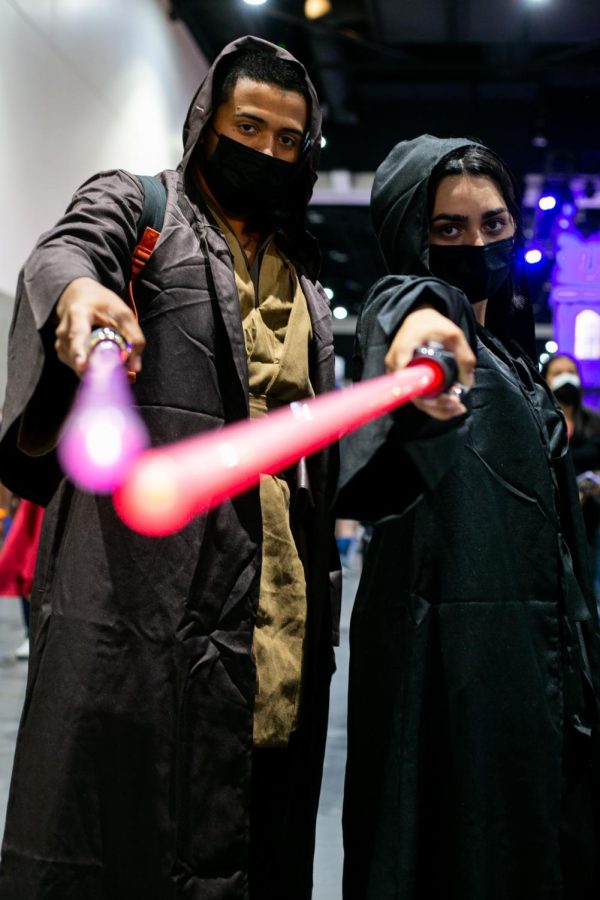 Across the curriculum of San Diego State’s course catalog, comic-driven classes are being offered. These hidden gem classes will showcase unique perspectives in history, representation and social justice issues through analyzing comics.
Professor Elizabeth Pollard and pop-culture librarian Pamela Jackson (co-directors of the Center for Comic Studies) encourage students to explore their scholarship through the lens of comics.
“Our world around us is so visual and so heavily entrenched in that,” Jackson said. “Even if you don’t care about comics, learning those skills of that close reading and close analysis of visual formats [will be] an invaluable skill in the modern world that surrounds us.”
Previously known as Comics@SDSU, the center explores the power of comics through an analytical and research-oriented approach. They shared how comics can transform humanity, during one of their Comic-Con panels.
That is why they helped curate over 100,000 comics in the library’s special collection archive.
SDSU offers five comic-driven courses with 10 more in development within the next two years, thanks to the two-year grant from the National Endowment for the Humanities. The grant will support the center to build a comics and social justice curriculum,which will eventually expand. According to Pollard, this is only the beginning.
A Comic Studies Certificate will be proposed to the university by 2023, predicting it will be approved for the 2024 school year. Certificates are similar to minors but require fewer credits. For now they said they are really excited for the range of courses that will be available this all.
Professor Gregory Daddis will teach his first comic driven course called, “Comics and Cold War America.”
In this course, he said he wants to show his students how comics showed the fears and values that Americans had during this era. His lectures will discuss the containment of the communist threat, science fiction as an allegory of the cold war, issues of juvenile delinquency, social justice and more.
Illustrations intertwined with the written word become very powerful, said Daddis.
“These aren’t just throw-away cultural products for kids,” he said. “I think they’re very reflective of where America was during the Cold War and what many Americans were thinking in the post World War II era.”
Africana Studies Professor Ajani Brown, a fan of comics since he was eight, has been teaching his Afrofuturism course since 2014 and has another course called “Super Black” in the works. The course will discuss the politics of representation in comics. His motivation to create these courses is to fill in the gaps of what he wished he could have taken while he attended SDSU.
“It’s a dream class. Students are gonna love it,” he said. “It’s important for everybody to get that wide breadth of humanities from the comic books perspective because that’s never happened before.”
Other current courses include Comics and History, Native Americans in Comics and Graphic Arts, Graphic History, The Visual Odyssey in Sequential Media, and Illustration

Jackson and Pollard said they are aiming high with the hopes of also creating a comics minor and a major, but the timeline of these goals are dependent on student interest.
“If the students take these courses and show that there’s a demand, that is going to be the most compelling argument to make the certificate into a minor and then more,” Pollard said.
Fawaz Qashat, a third year biology major said Comics@SDSU was the particle accelerator to his knowledge of comics, referencing CW’s The Flash series.
“Comics started off as a hobby, but (Comics@SDSU) showed me there’s so much more to comics that helps us learn about the status quo,” Qashat said.
Qashat was taught to find deeper meaning in what comics try to tell its readers. One of those messages was in a comic about Marvel’s Wanda and Vision where he saw themes of the immigrant experience through Wanda and discrimination of their relationship in predominantly white neighborhoods.
“I, as an immigrant, not only love this character for her, but also can relate to her, because I was also seen as an outsider when I came here,” Qashat said. “I also didn’t speak English very well when I first started school.”
Qashat, who hopes to be a physician one day, said he wants to use his newfound perspective of comics by creating accessible information similar to graphic medicine, which are comic style infoguides on medicine uses.
For the nerds at heart, hesitant to embrace what they love, Qashat said to stop hiding.
“I’m here as the person telling [them] that, no, you can still do what you love and incorporate it into your major,” he said. “Express your fandom because we’re all here to cheer you on.”