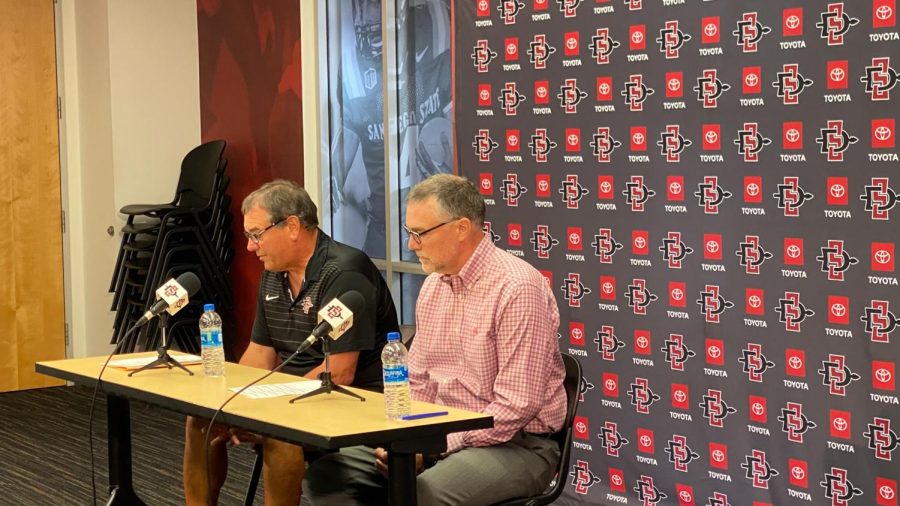 Hoke said he supports the city’s investigation and he “was not aware” of former punter Matt Araiza’s alleged involvement in the rape reported in the suit.

“What was reported to have happened should never happen, ever, it shouldn’t happen to anyone,” Hoke said.

Many students and community members have criticized how long it took SDSU officials to notify the campus community. Wicker said in an opening statement they “take allegations of sexual assault seriously” and do not condone related behavior.

“As husbands and fathers, coach Hoke and I fundamentally agree on this,” Wicker said. “Under no circumstance would we support an environment that supports abusive behavior.”

A reporter asked Wicker why the team decided to invite gang-rape survivor Brenda Tracy to speak to the football team for a mandated meeting only 17 days after the alleged incident. Tracy was sexually assaulted and robbed by multiple Oregon State football players in 1998.

“Brenda Tracy was invited to the athletic department to speak with our male student-athletes as part of the training that we provide to all our student-athletes,” Wicker said.

Hoke and Wicker walked out of the conference after the press’ persistence about the allegations, and said they would only answer questions about the upcoming Saturday game.

Both men answered two questions about the allegations before they walked out 10 minutes into the press conference.

Moments later, athletic director Wicker returned and continued to answer questions about the alleged rape. Wicker initially said Tracy was brought in as a part of training for all student athletes, but later said she was asked to speak because of the reported allegations.

“We brought Brenda Tracy in relation to an incident that had been reported to us that SDPD was investigating, we brought her in for advanced education,” Wicker said.

The civil suit complaint was sent to various media outlets, but has not been officially released by the presiding court. Doe’s attorney Dan Gilleon submitted a request to have the complaint sealed.

As of Monday, the district attorney has not announced whether criminal charges will be filed against the named defendants.