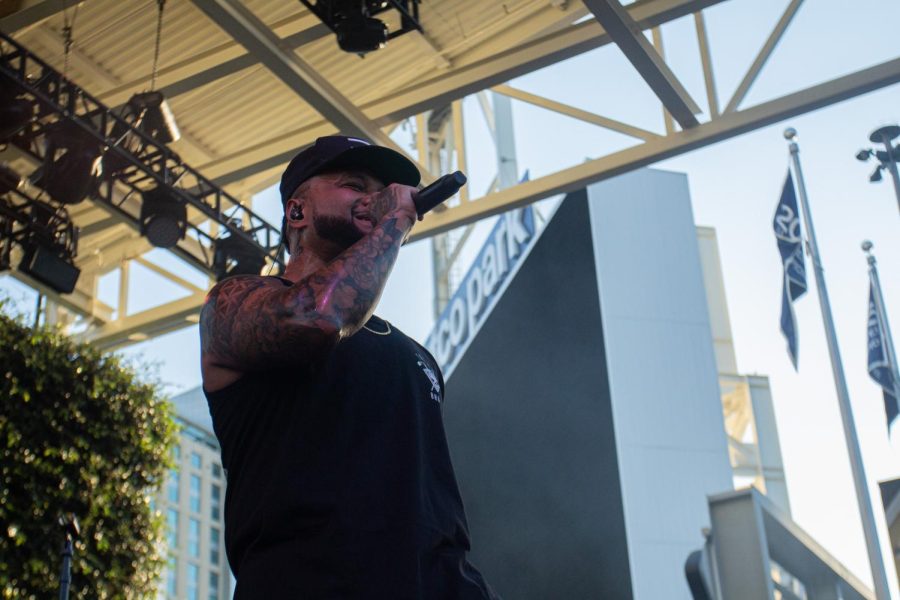 As showtime approached, the sun blazed down onto PETCO Park late Saturday afternoon. In the midst of the heat wave, temperatures reached a high of 96 degrees. As the crew tuned the instruments, the doors opened and people began filing in.

The attendees shifted into two groups: those who searched for refuge in the shade of the trees and others who rushed directly to the front of the stage. In the shade, blankets covered the grassy hill. The brave souls who clung to the barricades donned hats to block the sun. Water and ice-cold beer flew off the shelves.

Fortunate Youth, the opening band, took the stage and the diehard fans loudly cheered. Then they addressed the elephant in the room.

“Thank God that sun’s going down, am I right ladies and gentlemen?” Fortunate Youth’s vocalist, Dan Kelly, declared to the energized crowd.

The tour, which started on July 7 in Montana, featured a slew of reggae bands from California. This wasn’t just the last stop on an extensive tour, it was a homecoming show. Slightly Stoopid hails from Ocean Beach, San Diego. The band met there over twenty years ago and recorded their debut record there.

Throughout the night, SD received a big ovation from the bands and the fans alike. All in all, the nearly five-hour show was full of sun, smoke and smiles.

Fortunate Youth, led by the soulful lead vocals of Dan Kelly and smooth guitar licks of Travis Walpole, kicked things off. Their 2021 release “Good Times (Roll On)” and 2017’s “Friends and Family” were some of the highlights of the set, which featured a strong brass section.

Fortunate Youth, formed out of Hermosa Beach in California, mixed rock and reggae with touches of ska and blues rounding out their sound. They were one of the younger bands that was featured in the show, as they began making music in 2009.

Common Kings, the youngest group of the night, followed Fortunate Youth up with a high energy set. The Orange County-natives brought in a groovier, funkier sound. Guitarist Taumata ‘Mata’ Grey fired up the crowd while bassist Ivan ‘Uncle Lui’ Kirimaua provided some subtle basslines that moved the songs along.

The band was nominated for a Grammy Award in 2017 for their debut record “Lost in Paradise.” That record peaked at No. 1 on the reggae charts in the same year. Since then, they released an EP entitled “One Day” and recorded a live performance at San Diego’s Humphrey’s By the Bay. Their latest single, “Damn Good Time,” was a part of their setlist.

The crowd came alive during their cover of Dr. Dre’s “The Next Episode,” as fans throughout the venue raised their hands in the air and recited the iconic lyrics in near-perfect unison.

Pepper took the stage afterwards, giving the most eccentric performance of the night.

“God, I forgot how good we are!” lead singer Brett Bollinger joked to the now-full general admission audience.

Fans stood shoulder-to-shoulder from the barricades to the trees in the back of the venue at this point in the show. The band has a long history with the headliner as the two groups met in Slightly Stoopid’s hometown of Ocean Beach early in their careers. They still perform together to this day.

Slightly Stoopid wrapped up the epic concert with a slew of guests and some of the biggest ovations of the night. The band, who have been active since 1994, showed no signs of slowing down.

The first part of their set included some of their biggest hits, from “Collie Man” to “2am,” both of which are certified gold records by the Recording Industry Association of America. Like Common Kings, they paid homage to Dr. Dre – this time performing a cover of “Still D.R.E” to the audience’s delight.

Their setlist featured five songs from their 2003 album, “Everything You Need,” including the aforementioned “Collie Man.” Their set also included three tracks from their most recent full-length effort “Everyday Life, Everyday People.”

For the encore, they played their iconic track “Closer to the Sun.” Their set concluded with a performance of ‘Perfect Gentlemen’ and 50 Cent’s “P.I.M.P.”

After six hours of reggae and rock, fans got their money’s worth – even if they have some sunburns to show for it.