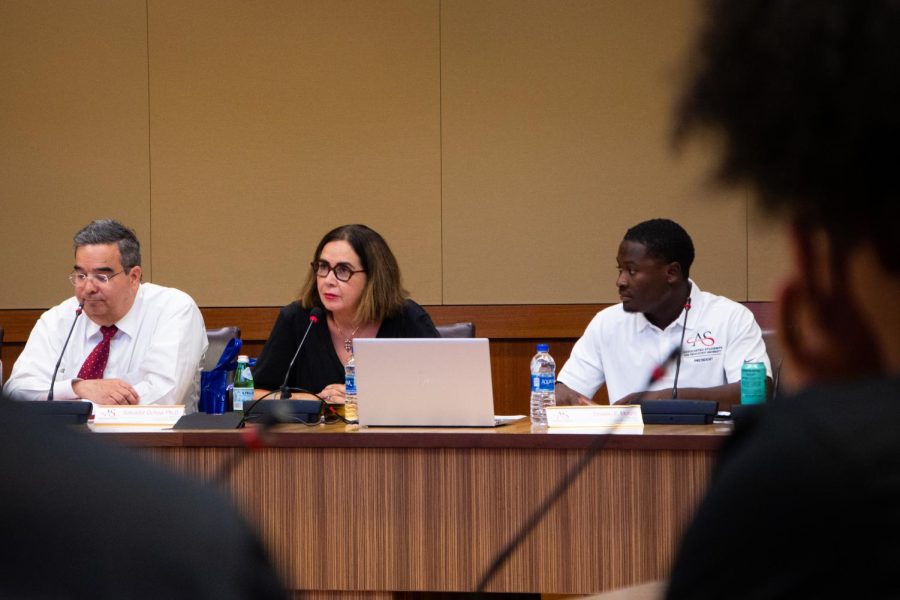 This decision to defer the investigation to the San Diego Police Department has been criticized by community members calling for accountability and clarity from the SDSU administration. De la Torre has faced the brunt of this criticism.

“When I look at what I did, what my team did, our leadership team, our legal team, unequivocally it was the right decision. Unequivocally,” de la Torre said.

“I cannot say and I would not be honest with you to say I would change it just because of the media firestorm. One always has to do the right thing. In this case, it was the right thing to let the criminal investigation process to occur unimpeded. Unimpeded.”

SDSU officials did not receive formal notification from San Diego police to move forward with their independent investigation until July 22, according to an email from the Office of the President.

De la Torre said the university initially attempted twice to contact the alleged victim but was met without response.

“The victim chose not to respond,” de la Torre said. “And that is her right and we respect that right.”

These comments follow a civil lawsuit filed Aug. 25 against three former SDSU football players alleging a gang-rape of a 17-year-old-girl at an off-campus party last October. The lawsuit named former Buffalo Bills punter Matt Araiza, Zavier Leonard and Nowlin “Pa’a” Ewaliko. Two days after the civil suit was filed, Araiza was released by the Buffalo Bills and Leonard was removed from the roster. Ewaliko was rostered through the summer but was not on the preseason lineup.

According to the lawsuit, the alleged victim, Jane Doe, arrived at an off-campus party last year on Oct. 17. She was already intoxicated and was given a drink by Araiza, which, allegedly, contained intoxicating substances other than alcohol.

After telling Araiza she was a high school student, she was then taken to a room where Leonard, Ewaliko and at least one other man were waiting, according to the complaint. Allegedly, Doe was then thrown on the bed and raped for 90 minutes leaving bloodied and bruised.

Now nearly a year later, the case has been handed over to the District Attorney’s office where it will be decided if there is enough evidence to proceed with criminal charges.

Each decision made by SDSU officials since June has invoked a variety of emotions throughout the student body.

De la Torre has sent four emails to the community regarding the investigation since June. Students said they feel this response is not enough.

“I feel they could do more, but what they’ve done so far is just like — they’ve just done things to seem good to the public,”  journalism junior Ashley Lizarraga said. “I haven’t seen much of what the police department has done because I thought it was a little bit hands-off ish. So I feel they could possibly do more.”

Media studies senior Yasmine Atta said she believes the handling of the case represents “an act of cowardice” by the administration.

“The entire situation just reaffirmed to me—and many women around me that our problems on campus are not prioritized at this school. I’m uncomfortable, and can’t imagine how the victim feels,” Atta said.

English junior Jolene Verdehyou said as a cop’s daughter, she has seen law enforcement ignore sexual assault victims until “a multitude of women” are impacted.

“They’re really shutting them out,” she said. “No one’s really listening to them.”

Most students, faculty, and community members of SDSU were unaware of the case until an article by the LA Times uncovered the case on June 3.

The article, which detailed some of the claims of Jane Doe, prompted some students to believe they should have been notified of the situation.

Computer Science senior Dustin Mullins is one of them.

“I think that the university definitely should have let the students know about this assault,” he said. “Their excuse of  ‘it happened off campus’ is ridiculous.”

“As for the SDPD, I do not know about how their investigations are done, I can only hope that the girl is able to find justice,” he said.

The football team’s involvement in the case had been unknown until a press conference hosted by Athletic Director John David Wicker and head football coach Brady Hoke was held on Aug. 29. Before walking out of the press conference due to persistence by the press, Hoke said he was unaware of any specific players involved until the civil suit was filed.

However, Brenda Tracy, a gang-rape survivor who travels to universities to help combat gender-based violence. Tracy was asked to talk to the football team two and a half weeks after the alleged incident occurred.

Mullins said this was proof SDSU officials knew something happened before the news was public.

“If they knew exactly who did it, they should have been off the team immediately,” Mullins said. “Unfortunately I don’t think we’ll ever know who knew about it and when.”

“It is disgusting that SDSU would rather cover this up and ignore it than seek out justice.”

Tracy released a statement on Twitter Aug. 28 that said she was told the day of her guest session “an incident had happened,” but no specific details were provided. She also said she was able to spend additional time with the team, coaches and other men’s teams.

But she also criticized SDSU official’s handling of the case.

“As a gang-rape survivor myself, the SDSU case is very triggering,” Tracy said. “As I read more and more the details of this case, it is becoming more obvious that SDSU did not do the right thing.”

While some critics claim the university has not done its part, de la Torre said to members of the all-council that the allegations are untrue.

“There has never been a coverup and the implication is truly, in my mind, offensive,” she said.

If you or someone you know has experienced sex discrimination or sexual violence contact the Title IX Coordinator, Gail Mendez, at gmmendez@sdsu.edu, for resources and assistance.