After a two-year wait, the Stadium Tour hits San Diego 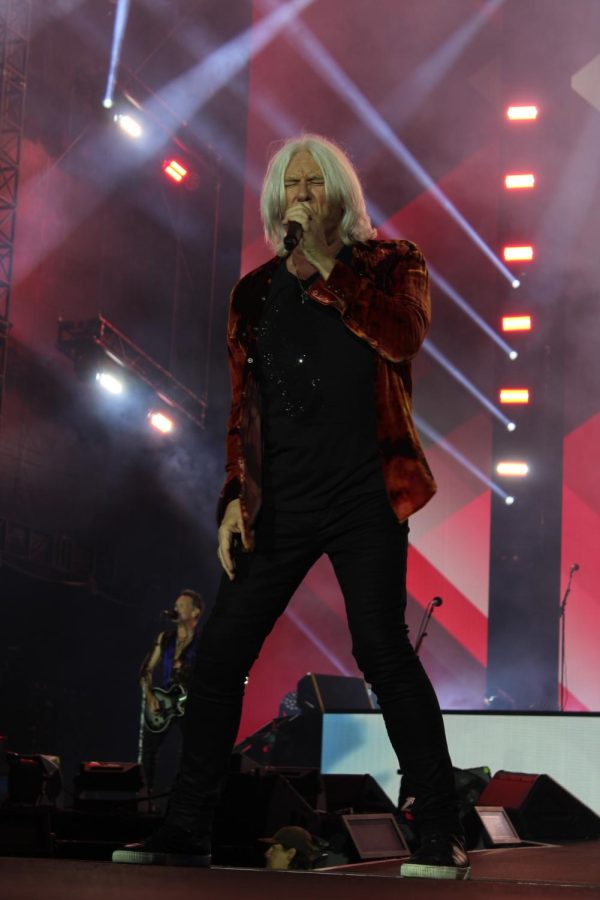 Fans donned their largest wigs to welcome some of the best rock bands the 1980s had to offer at Petco Park on Sunday, Aug. 28. The star-studded concert was postponed for two years due to COVID-19, but that did not stop the audience and the bands from giving this incredible night everything they had.

The five-part show began with the up-and-coming rock band, Classless Act. They performed quite a few songs from their debut album “Welcome To The Show” and interacted with the screaming fans that surrounded the stage.

“This is For You” opened the concert with a roaring applause, getting the crowd riled up for Joan Jett & the Blackhearts.

Dressed in leather and heels on a hot summer day, Joan Jett & the Blackhearts started their set with a bang. “Cherry Bomb” got the audience excited for the rest of their night in the 1980s, with men and women alike swooning over Joan Jett and vying for her attention.

The screens on the stage were filled with humorous images for each song. Some had floating heads that sang to the music while others displayed pictures of young Joan Jett.

The set ended with one of their most famous hits, “Bad Reputation,” which left the crowd begging for an encore.

Poison’s lead singer, Bret Michaels, ran down the stage as they began their set with “Look What the Cat Dragged In” to amplify the energy in the stadium. Being the lady’s man, fans screamed and grabbed his arms as he bent over to hold their hands.

The entire stage glowed green from the signature lighting that Poison is so famous for. The smoke machines gave the band a mysterious look as they rocked out to their songs.

Just before starting one of their biggest hits, “Every Rose Has Its Thorn,” Poison shared the stage with local first responders to give thanks for protecting the country.

Mötley Crüe and their backup dancers, the Nasty Habits, gave their excited fans an experience of a lifetime. From amazing stage presence to raunchy jokes, this show will forever be ingrained in the hearts of the audience.

Images of women dancing seductively were displayed behind the stage as the three members of the Nasty Habits danced around the stage.

The rowdy and emotional crowd screamed lyrics to Vince Neil, competing for attention during “Girls, Girls, Girls.” Some members of the crowd even flashed the band after some suggestive comments from Neil.

Def Leppard swept their die-hard fans off their feet, closing the concert out in an energetic performance for the ages. Leading their set with “Take What You Want” and “Let It Go” the British band used the entirety of the stage, getting up close and personal with their audience.

“Pour Some Sugar On Me” got all of their fans to their feet, even after the four-hour-long concert. Inebriated concert-goers leaned to their friends for support and sang along with the tune that always gets stuck in everyone’s head.

Many people of all ages shed tears over seeing their favorite bands perform after waiting so long to have this experience.