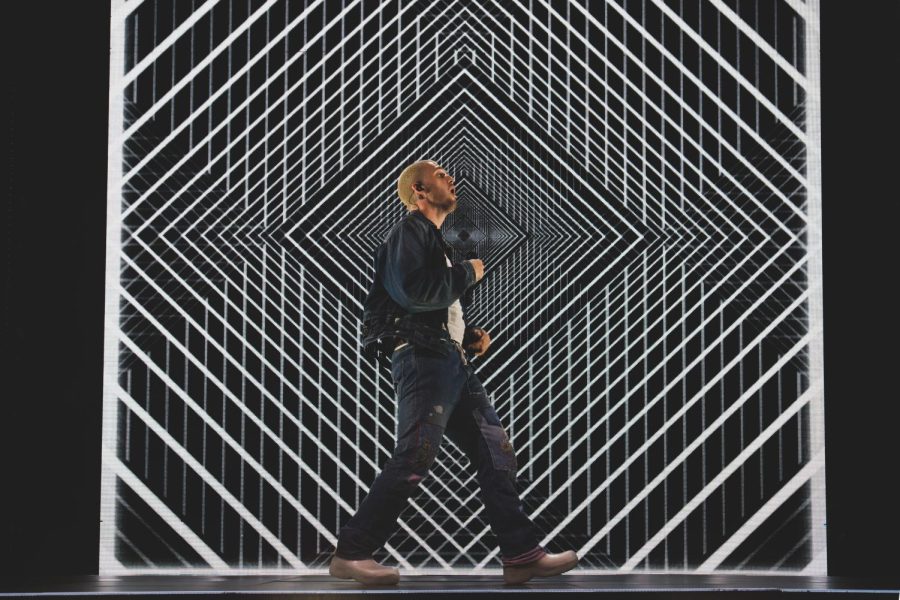 LAUV looks out on his adoring fans as he opens his set.

Four years after opening for Ed Sheeran in his 2018 ÷ tour, Lauv headlines his own show. He continued his “All 4 Nothing” tour on Sunday night in front of an enthusiastic crowd at Cal Coast Open Air Amphitheater.

Lauv was joined by two openers: Payday and Hayley Kiyoko. Payday was the first to take the stage. At 18 years old, she’s released three mixtapes and found a following through SoundCloud and Tik Tok, an increasingly successful route for young artists.

While the nerves were evident, her excitement overcame it all. “I hope you’re happy to be here,” she shouted to the crowd. “I know I am!”

She performed five tracks with a ton of energy and charm. While the venue was filling in slowly, she received a warm ovation from the fans in front of the stage.

In between sets, groups of people eagerly ran down the stairs of the amphitheater and took pictures in front of the stage. The security guard received several requests to take the pictures, but eventually had to hand the task of photographer off to the people in the front rows.

As the lights dimmed again, the crowd welcomed the next performer, Hayley Kiyoko. At 31 years old, Kiyoko is no stranger to the stage. While she’s released two studio albums and three EPs as a musician, she’s most known for her work as an actress.

Her acting catalog includes recurring roles on Disney Channel’s “Wizards of Waverly Place” and ABC’s “The Fosters.” She was featured in a variety of films as well, most notably “Lemonade Mouth” and “Insidious 3.” In recent years, she has shifted her focus to music.

Kiyoko, dressed in a bright orange tank top and green cargo pants, impressed the local crowd with her style and vivacity. Her music embraced heavier rock tones on top of catchy pop melodies. She opened with “Demons” from her 2020 EP, “I’m Too Sensitive for This Shit.”

Her new album, “PANORAMA,” was prominent during her set, from the sultry “Sugar at the Bottom” to the emotional self-titled track, “Panorama.” However, fans were most excited to hear her viral 2015 single “Girls Like Girls.” The hit song sits atop her Spotify profile with an impressive 119 million streams.

In anticipation of the headliner, the crowd was buzzing.

Ari Staprans Leff, better known by his stage name Lauv, then took the stage. He started with two tracks on his most recent album – “26” and “Kids are Born Stars.” His new record, “All 4 Nothing,” was released less than a month ago on Aug. 5. Just six days later, he hit the road and began his U.S. tour. The record received a Metacritic score of 67 from critics, but had an even more impressive user score of 8.4 out of 10. The fans embraced his new music, and it showed.

From the start of the show, the crowd was singing along loudly and proudly. Many times during the show, Lauv directed the microphone at the crowd, letting the symphony of voices carry his biggest hits.

“Paris in Rain,” the third track on the setlist, slowed things down. In the ballad, Lauv crooned, “anywhere with you feels right.” Phone lights filled the sky, while fans in the front rows captured the magical moment on video. He wasted no time bringing the energy back up, delivering a high-energy performance of “Chasing Fire.” At this point, everyone in the venue stood and stayed that way for the majority of the show.

Lauv performed all of his biggest hits to the audience’s delight and mixed in his newest work. The show had a natural flow, and his vocals sounded as good as his recordings. Whenever he took a second to take a sip of water or talk to the crowd, he was met with fans shouting “we love you Lauv!” at the top of their lungs.

While spirits were high throughout the night, Lauv was candid about his feelings of loneliness and his experience with OCD and depression. His music helped him process those feelings, particularly in two of his tracks – “f—-, I’m lonely” and “modern loneliness.”

In a night with some heavy themes and feelings, there was still a lot of joy and triumph. The final track, “I Like Me Better” ended the night on a high note. The track, released in 2017, is nearing one-and-a-half billion streams on Spotify. This puts the song into elite territory as the 90th most streamed song of all-time.

The audience surely knew every word as they belted out the lyrics. Couples held each other close and friends danced together in the last moments of the show.

Lauv’s “All 4 Nothing” tour continues this week and concludes in Seattle on Sept. 20.